Updated on: Jul 15, 2013
Editorial Integrity - Why you should trust us?
Our mission is to help you make educated insurance decisions with confidence. We have an advertising relationship with some of the offers included on this page. However, this doesn’t influence our editorial judgment or recommendations. The rankings and listings of our reviews, tools and all other content are based on objective analysis, and we fully own our opinions.

Detroit: The city where no one has car insurance 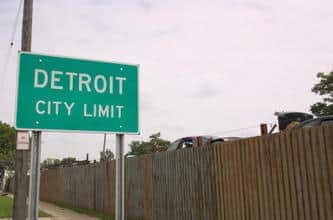 As executive director for Publius, a voter-education nonprofit in Michigan, Vincent Keenan got well acquainted with an odd phenomenon in his hometown of Detroit: A troubling number of residents aren’t registered to vote in the Motor City.

The reason has nothing to do with citizen apathy.

Instead they are registered to vote in the suburbs, where car insurance is cheaper. They use an address outside the city to renew their driver’s licenses and register, then report that address to insurers.

“It’s an amazingly pervasive piece of information about living in the city of Detroit that people pick up on incredibly quickly,” Keenan says. “It is effectively a poll tax.”

The impact on voter registration is just one of the consequences of the city’s sky-high car insurance rates. Another: Lots of folks don’t buy insurance.

Michigan has one of the highest uninsured driver rates, with an estimated 19 percent of motorists going without insurance, according to the latest Insurance Research Council study. But estimates for the uninsured rate in Detroit are even higher.

While Michigan’s car insurance rates are already high compared with other states, Detroit’s are in another league.

Keenan, who’s now running for City Council, knows firsthand. About 10 years ago he moved just one block from outside the city limits to inside Detroit. His car insurance premiums tripled.

In the most expensive areas of Detroit, according to an analysis of rates from six major car insurance carriers, the average rate for a 40-year-old driver with full coverage on a 2012 Honda Accord is about $4,500 a year. Move a ZIP code or two outside the city and those rates drop by half or more.

And that’s for a driver with a clean record. Poor credit or violations would drive that number up considerably. Only some areas of Brooklyn, N.Y., can rival Detroit for whopping car insurance bills.

No wonder some Detroiters fall for fake insurance scams or make the decision to go without.

But getting caught means a fine of up to $500 — and also much higher rates when they finally do buy insurance. Failure to pay means a suspended license, and in turn higher rates again because of the suspension.

Michigan is the only state that guarantees unlimited, lifetime personal injury protection (PIP) benefits for someone injured in a car accident. Visit our state page for more information on Michigan car insurance laws.

Car owners have to buy personal injury protection as part of the policy. The benefits pay the medical bills of the policyholder and household members, and passengers who don’t have PIP coverage. The injured person’s insurer pays out the first $500,000 for medical treatment, and a state-created nonprofit called the Michigan Catastrophic Claims Association reimburses for any amount above the threshold. Premiums include an annual assessment from the association, which is $175 per vehicle this year.

The average PIP claim in Michigan is $45,000, according to the Insurance Institute of Michigan, much higher than any of the other 11 no-fault states.

Detroit’s rates are higher still because the risks of theft and accidents are higher there, just as they are in other urban areas. The claims rate for personal injury and costs for treatment also tend to be higher in urban areas, says Peter Kuhnmuench, executive director of the Insurance Institute of Michigan. Hospitals have to charge more in cities like Detroit, where there are large numbers of people without health insurance, to make up for the costs of treating so many people who can’t pay.

Poorest pay the most

Detroit is one of the poorest cities in the country — median household income in 2011 was $25,193, about half the national average — and many residents “drive dirty” because they simply can’t afford car insurance.

Drivers who are uninsured and get injured in car accidents are not allowed to seek any compensation from at-fault drivers, even if the at-fault drivers were drunk or texting while driving, Gursten says. He says he gets calls weekly about innocent people who suffered catastrophic injuries but were uninsured.

“I can’t tell you how many people just lost their husband or wife in an accident, and there’s nothing I can do for them,” he says. “I think it’s a civil justice and a civil rights issue.”

He blames the problem on insurers’ “excessive profit margins” and wants Michigan to pass a law that would empower the state insurance commissioner to consider profit margins in regulating car insurance rates.

The industry, not surprisingly, disagrees. Kuhnmuench cites data from the Insurance Information Institute that shows Michigan at dead last among states for insurers’ 10-year average return on net worth on personal auto insurance from 2001 to 2010.

To bring down rates, the Insurance Institute of Michigan wants to give consumers the option to buy lower limits of PIP, institute a medical fee schedule to limit how much health care providers can charge for treatment and tighten up restrictions on lawsuits, Kuhnmuench says.

Keenan says the connection between voter registration and car insurance should somehow be severed. People shouldn’t have to think about their car insurance when they register to vote, he says.

To make car insurance more affordable, some have suggested a public insurance system in Detroit, where the strapped city government is now under emergency management by the state.

“Things are dire enough that the potential is there to discuss things you wouldn’t normally discuss, like a public option on car insurance,” Keenan says. “You’d have more fertile ground for that than ever before.”