Drive uninsured and legally for $500

Aaron Crowe | Updated on: Feb 28, 2012
Editorial Integrity - Why you should trust us?
Our mission is to help you make educated insurance decisions with confidence. We have an advertising relationship with some of the offers included on this page. However, this doesn’t influence our editorial judgment or recommendations. The rankings and listings of our reviews, tools and all other content are based on objective analysis, and we fully own our opinions. 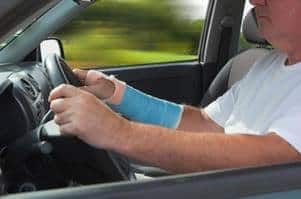 In practice, every state requires drivers to have auto insurance, and they punish scofflaws by assessing big fines and adding black marks to their driving records.

In theory, though, there are exceptions. New Hampshire doesn’t require car insurance, but it does require that you be able to immediately cover the cost of any damages you cause. Of course, unless you’re rich enough to write a check, the only way to do that is through car insurance.

Then there are Virginia and South Carolina, where you can pay the state about $500 to legally drive without auto insurance.

If a police officer pulls you over and you don’t have insurance, you show proof that you’ve paid the annual uninsured motorist fee and you won’t be ticketed for driving without insurance or face all of the fines and court costs that usually accompany such a crime. You may still get ticketed for the original offense that caused the officer to pull you over, but you won’t get cited for not having insurance.

You’re also still liable for the damage you cause.

Pay your money and take your chances

The $550 uninsured motorist fee, as it’s called in South Carolina, doesn’t buy the user any insurance, and the driver is still liable for damages if he or she is at fault in an accident.

“You have to pay it every year. It’s just not the smartest way to go,” says Beth Parks, spokesperson for the South Carolina Department of Motor Vehicles. It’s enough money that “you can insure a vehicle for less than that,” says Parks. “It doesn’t really give them much of anything.” (Depending on where you live and how old you are, you might be able to find a no-frills policy for less than $500 a year.)

Then why would anyone buy it?

Doug Barry, a personal injury attorney in Virginia, says the $500 fee for Virginia’s uninsured motor vehicle (UMV) registration might be cheaper for someone who doesn’t have any assets to lose but wants to drive legally.

“Once you pay the fee you’re good to go, other than being liable,” Barry says. An uninsured driver in Virginia who causes an accident — whether or not the driver has paid the UMV fee — is liable for damages, but it may be impossible to get money out of them if they don’t own much, Barry says.

Or it may be that someone who pays the fee to drive legally without insurance thinks that the monthly insurance premium isn’t worth the cost. “People never think they’ll get in an accident, I guess,” says Melanie Stokes, spokesperson for the Virginia Department of Motor Vehicles. “Why pay this monthly fee if you never use it?”

Few takers in either state

Of 5.4 million drivers who were licensed last fiscal year in Virginia, 2,425 paid the voluntary fee.

Virginia’s UMV fee has been around since 1958. The state also requires drivers caught without insurance, or who have paid the UMV fee, to carry an SR-22 certificate for three years once they rejoin the world of the insured.

In South Carolina, 41 people have paid the uninsured motorist fee since it started in 1999, Parks says. Drivers who don’t pay the fee or have insurance can be fined $200 if they let their insurance lapse. They can also be charged up to $200 more at $5 per day for every day it remains lapsed, she says.

South Carolina has a list of requirements to become a legal uninsured driver, the first being that every driver in the household must have a driver’s license for three or more years before anyone in the household can qualify to become legally uninsured.

To qualify for the program, drivers also cannot have been convicted of driving violations in the past three years, including:

“They have to be good drivers,” Parks says. “That’s why I don’t understand why they would buy it.”

One thing car insurance companies prize highly is “continuous coverage.” A lapse in insurance coverage could stem from many things, but most of them are not good. You could have lost your license, for example, or been canceled for nonpayment.

Or you might have been driving without insurance, which doesn’t say great things about your risk potential.

If you have a lapse on your record and go to buy insurance, there’s already one major strike against you. You are likely to be refused by many insurance carriers, or steered to one of their nonstandard subsidiaries. You will pay much higher rates than someone who drives the same type of car and has an otherwise identical driving record.

You also miss out on discounts that most motorists take for granted, says Penny Gusner, consumer analyst for CarInsurance.com. Continuous coverage and renewal discounts could be worth up to 10 percent off your car insurance costs, Gusner notes.

“It ends up being a double whammy of higher base rates and missed out discounts,” Gusner says.