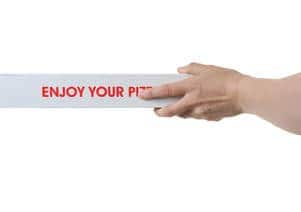 The average pizza delivery driver earns an average of $7.32 an hour, according to Glassdoor.com. The average tip is around $2.

No one signs up to get rich, just to get by.

But delivering pizza can be dangerous - and, if you haven't asked the right questions, financially ruinous as well. According to the Bureau of Labor Statistics, there were 683 fatal accidents in the driver/sales worker and truck driver category, which includes delivery drivers. It is the eighth most dangerous job in the country.

Domino's says its delivery drivers will log 4 million miles on Super Bowl Sunday, the busiest pizza-delivery day of the year. Orders surge if the game is close.

Most of big pizza joints deliver chicken wings as well, a food now rivaling pizzas as the day's most popular, according to the National Restaurant Association, which estimates Americans will consume 1.25 billion wings on that single day.

Everybody wants them hot. And at halftime. Getting them there seems a prescription for auto accidents:

The capper: If you're using your own car to run pizzas, you're probably not covered under your personal auto insurance policy.

What you need to know about pizza delivery

If you or your teenager is considering taking a job as a pizza delivery person, there are a few things you should know before accepting the position.

If you're driving a company-owned vehicle, liability for an accident falls to the pizzeria. But all the violations still accrue to your own driver's license. So jump in and start driving … carefully.

Driving your own vehicle, on the other hand, requires some questions of both your insurance company and prospective employers. The majority of insurance companies will not cover pizza delivery drivers under a personal insurance policy because of the dramatically increased risks.

Some policies will cover pizza delivery if the job is part time and the policy is coded to include business use.

Pizzerias can purchase auto insurance to protect the business from liability if its delivery driver is involved in an accident while driving a personal vehicle. While covering the pizzeria from liability, this type of insurance does not cover the cost of damages to your vehicle or your medical bills.

You may be tempted to be less than honest with your insurer. But that could result in denied claims and a dropped policy if the company investigates. If you are involved in a serious accident, it will.

Who pays? Whoever has the money

Attorneys prefer to sue the employer, of course, rather than its $7.32-an-hour employees.

But many pizzerias are completely uninsured, or drastically underinsured. Some don't know they need a policy, and others are trying to avoid the cost. (Epic Insurance's "SLICE" program covering only the pizzeria's liability can cost as much as $6,000 per store.)

Whatever the reason, an uninsured or underinsured employer can spell real trouble for a delivery driver.

Attorney Thomas Ryan of Cleveland represented a 43-year-old woman who was rear-ended by a delivery driver reaching for his dropped phone. Her injuries were substantial, and the pizzeria had coverage limits of only $25,000. This amount did not cover the cost of her injuries. She eventually settled with the pizzeria.

A settlement with the business doesn't necessarily leave the driver in the clear.

"Victims are entitled to recovery from anyone who is negligent," says attorney Bradford H. Bernstein of New York. "In most instances, it is preferable to put the claim in through the employer, but if they are not insured a claim would be put in against the driver."

The driver's policy is then put to the test, which it may fail if the driver has gone for the cheapest state-minimum liability policy. Even a modest fender-bender can result in insurance claims that easily exceed limits as low as $15,000 per injured person and $5,000 in property damage.

Once those limits are hit, the driver's personal assets--or perhaps those of his parents if the driver is a teenager--are vulnerable.

Insurance with all the toppings

How can you protect yourself?

"If you plan on using a personal or family vehicle to deliver pizza," Ryan advises, "then make sure to check your insurance policy for exclusions, I would also check the employment agreement with the pizza company. There should be a specific provision in the employment agreement regarding whose vehicle will be used and/or who will be liable in the event of an accident."

The only sure way to be covered for both damages to your car and liability insurance is to purchase a commercial driver policy. These policies are always more expensive than a personal policy, but they will provide the protection you need.

We compared minimum-liability auto insurance quotes for a 23-year-old with a clean record in Seattle; the cheapest policy for personal use ran $780 a year, and the cheapest for delivery use cost $1,440.

In reality, you need more protection than the state-minimum requirements provide. CarInsurance.com consumer analyst Penny Gusner recommends levels of 100/300/50--that's $100,000 for bodily injuries per person, up to $300,000 per accident, and property damage coverage of $50,000.

"Parents will want to be cautious about allowing a child to use a family vehicle for pizza delivery," she says. Even with a commercial policy in place, the car owner can be looked to for compensation once damages exceed the policy limits.

Gusner says a parent may want to place the car in the child's name on a separate policy.

However, parents should check state liability laws to see if they could still be held responsible for the actions of a child. If the child is living at home and is listed on the parents' tax returns as a dependent, it's possible the parents could be held liable even if the car is in the child's name.

Leave a Comment
Ask a Question
Comments
Tell us your thoughts
Leave a Comment
2 Responses to "Why the pizza guy doesn't have car insurance"
Disclaimer: Answers and comments provided are for information purposes. They are not intended to substitute informed professional advice. These responses should not be interpreted as a recommendation to buy or sell any insurance product, or to provide financial or legal advice. Please refer to your insurance policy for specific coverage and exclusion information. Please read our Terms of Service.