Erie Insurance asked 1,915 drivers age 18 and older what they do behind the wheel:

Other drivers said they have put in contact lenses or eye drops, curled eyelashes, scratched off lottery tickets and even played the guitar while behind the wheel. 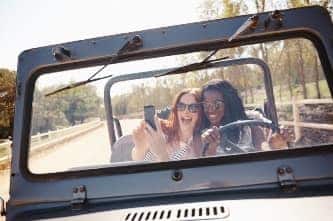 “A distraction is anything that causes a driver to take their eyes off the road, their hands off the wheel, or their mind off their primary task of driving safely,” Doug Smith, senior vice president of personal lines at Erie Insurance, said in a written statement. “Our survey found drivers unfortunately are engaging in a wide range of distracting and potentially dangerous behaviors.”

Who is texting and driving and where

Here are the texting results broken down by region, age and gender:

In 2012, 421,000 people were injured in car crashes involving distracted driving and 3,328 people were killed, according to the National Highway Transportation Safety Administration.

While kissing, primping and picture-taking may not be listed as specific driver violations and typically fall under the umbrella of distracted driving, 45 states now ban texting and driving. Even so, less than half consider texting behind the wheel a moving violation. Visit our state car insurance rates page for more information on state laws and average rates by city and town.

Leave a Comment
Ask a Question
Comments
Tell us your thoughts
Leave a Comment
0 Responses to "Smooching, grooming and selfies join texting as top driver distractions"
Disclaimer: Answers and comments provided are for information purposes. They are not intended to substitute informed professional advice. These responses should not be interpreted as a recommendation to buy or sell any insurance product, or to provide financial or legal advice. Please refer to your insurance policy for specific coverage and exclusion information. Please read our Terms of Service.