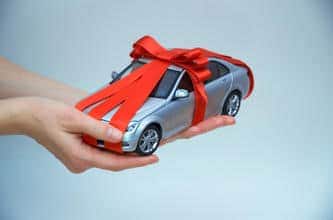 If you’re considering slipping the keys to a brand-new car under the tree, you have a daunting task ahead of you.

Not only do you have to find the perfect car, it must be paid for, titled and insured without tipping off the object of your affection. On top of that, you somehow have to get it home late on Christmas Eve with a big red bow mounted on the roof.

Advertising campaigns such as Lexus's “December to Remember” have helped drive both holiday sales and car gifting in general. Lexus started the campaign in 1998 and has turned December from its worst sales month into its best.

Spokesperson Allison Takahashi says Lexus doesn't keep statistics on the number of vehicles given as gifts, but one dealer, Jack McCartney, told The Philadelphia Inquirer last Christmas that he had 10 or 12 vehicles already paid for that were sitting out back waiting to be picked up on Christmas Eve.

Graduations and anniversaries rank high as car-giving occasions as well.

If you are considering taking the plunge, you will need to be both sneaky and thorough. You can’t leave a shiny new car at risk, even in the few days between when you buy the car and when you hand over the keys.

The fine print of giving a car

Giving a car as a gift is easy if the car is for your spouse or child and more complicated if you’re buying for a very, very good friend.

Buying and titling a car that you are part owner of is usually quite simple. Since you are an owner you can sign all of the paperwork and your spouse never has to know … until the big reveal. Andrew Schrage of MoneyCrashers warns that DMV rules can vary by state, that in some cases the other person's presence may be required, so contact your local DMV office to verify requirements.

Insurance should be a no-brainer as well. Penny Gusner, consumer analyst at Insure.com, says if you are listed as a co-owner on the car and are adding it to a shared policy, you can sign all necessary documents without getting your spouse involved, keeping your secret safe.

Things can be much more complicated if you are not a co-owner of the vehicle. Titling a car in someone else's name without that person’s signature on some paperwork is very difficult, especially if you are financing the car. Insurance can also be a challenge. Insurers will be concerned that you will have no insurable interest in the car, Gusner says, making them reluctant to write a policy.

But it is still possible to put a car in the driveway and be insured. You can title and insure the car in your name, and sign the title over as a gift a few days after the surprise. While it varies by jurisdiction, most states charge only a nominal fee for transferring a title if the car is being given as a gift.

The note simply said "Find a car outside with your next clue on the front window."

Chad Manciagli had no idea what he would find when he headed outside looking for the next clue in his mother’s scavenger hunt. As he pulled the note off of the 2010 Subaru Forester 2.5X's windshield, he was shocked to learn that he had reached the end of the hunt and the car he was standing next to was his, courtesy of his mother.

Dana Manciagli bought, titled and insured a car for her son entirely over the phone. Dana was in Seattle and her son had just graduated from the University of Arizona, Tucson.

Dana closed the deal with a Tucson car dealer over the phone and titled the car in her name to insure the car while keeping it a surprise. The dealer delivered the car, and Chad's roommate helped set up the scavenger hunt. A few days later Chad visited the local DMV and transferred the vehicle into his name.

While giving a car definitely requires some thought and planning, most dealers are very willing to help.

Here are a few tips for planning your surprise:

Leave a Comment
Ask a Question
Comments
Tell us your thoughts
Leave a Comment
0 Responses to "How to get car insurance when gifting a car"
Disclaimer: Answers and comments provided are for information purposes. They are not intended to substitute informed professional advice. These responses should not be interpreted as a recommendation to buy or sell any insurance product, or to provide financial or legal advice. Please refer to your insurance policy for specific coverage and exclusion information. Please read our Terms of Service.