Every state has its own car insurance laws, and that's one reason why car insurance rates  rates by state vary dramatically across the country. Another reason is that your location is chief among the factors car insurance companies use when setting rates. Based on the number and severity, or cost, of car insurance claims within the area, insurers assign ZIP codes different risk levels. Insurers take into account the frequency of thefts, collisions and vandalism to gauge the likelihood of such incidents happening to drivers within the ZIP code. This is used as the base rate from which insurers calculate your premium. Other pricing factors, such as your driving record, type of car you drive, how much coverage you buy and your age are then added into the calculation.

Below you’ll see how states rank for a full coverage policy, as well as what the average cost is for bare-bones coverage. The difference in price is significant, as minimum coverage only pays for damage you do to others and their property. In accidents that are your fault, your own car is not covered under a state minimum policy. Full coverage, which includes collision insurance, pays for damage to your car in accidents you cause. It also includes comprehensive insurance, which pays out up to the cash value of your car to repair or replace your car for damage due to fire, flooding, hail and animal strikes, and covers theft. Liability limits under full coverage are higher than state minimums, so provide more financial protection. That’s why there is a significant price difference.

Which states have the lowest car insurance rates?

States that are more rural and have fewer drivers generally have lower car insurance rates, overall, because there are fewer accident claims.  A states’ rate of uninsured drivers also plays a role in keeping costs low. Other factors come into play, too: for instance if the majority of drivers in a state have good credit, that can impact the state average, in states where it is legal to use credit when setting prices. Finally, rates are typically lower in states that have a competitive market for car insurance, meaning there are many local, small-sized carriers as well as major insurance companies selling policies in that state.

Which states have the highest car insurance rates?

Generally, states that are more urban or have large populations tend to have higher average car insurance costs than rural states. More drivers means more accident claims, which spikes costs. But other factors come into play, too, such as car insurance laws.

For instance, Michigan is notorious for leading the nation in car insurance costs due to its unique no-fault car insurance laws that provide unlimited benefits. While recent auto reform legislation is changing this, it won’t be in effect until July 2020. So, historically, Michigan operated under an unlimited no-fault car insurance mandate that required all drivers to carry Personal Injury Protection (PIP) coverage. PIP helps cover medical expenses for the policyholder, family members and passengers that are injured in a car accident.

While other states that require PIP put limits on PIP coverage amounts, Michigan did not. Michigan guaranteed unlimited, lifetime medical benefits to auto accident victims, which dramatically increased an insurer’s risk, and your premium.

Additionally, Michigan ranks number four in the country for uninsured drivers. Roughly, 20.3% of drivers in Michigan are without insurance. This also helps push rates up for insured drivers.

Louisiana has a different set of issues. Almost 40% of driver are carrying the absolute minimum coverage levels, according to Louisiana Insurance Commissioner Jim Donelon. And, about 13% of Louisiana drivers don’t have car insurance.  As a result, many drivers to turn to the legal system to get higher insurance settlements. Louisiana Watchdog reports that Louisiana lawsuit costs are amount the highest in the U.S., with annual expenses nearly hitting $7 billion, 20.6% higher than the national average. Auto accidents are the largest portion of the tort system costs reaching more than$3 billion. These higher payouts lead to higher premiums for everyone as insurers pass their costs on to policyholders.

In Nevada, there is also a high rate of uninsured motorists, nearly 11%. And as host to Las Vegas, the iconic gambling and resort destination, it has its share of traffic claims that balance out the more rural areas of the state.

Learn more about how car insurance rates vary by state

There are several reasons why auto insurance rates change by state. One major reason is that the state required minimum car insurance limits you need to have in place to drive legally vary by state. Some are lower than others. Liability insurance is typically written out showing amounts for each component. These include personal injury liability to pay medical expenses for those you injure in an accident you cause, and property damage liability, which pays for damage you cause to other vehicles and property. Like this example, for California, 15/30/5:

Also, some states require you to buy personal injury protection and uninsured motorist coverage, in addition to liability insurance.

See the average car insurance rates for each state. Click on your state to find out: 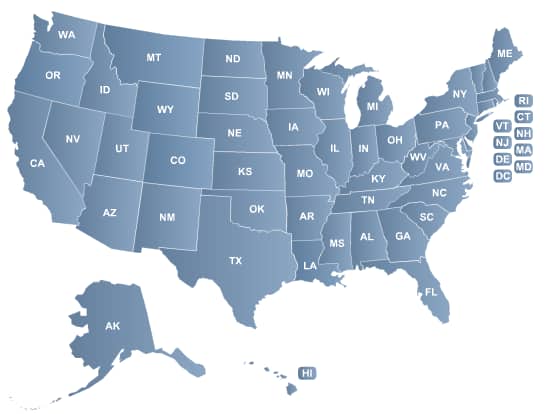 Why does where you live affect your car insurance rate?

Your insurance company's experience with losses in your neighborhood influences how much you pay. So does your state’s car insurance laws. In addition to state minimum liability requirements that differ, some states, for instance, allow insurers to consider your credit history and gender when calculating your cost, while others don’t allow it.

Additionally, urban areas tend to have more cars on the road more often than rural areas. That leads an increased number of accidents, theft and vandalism.  The more claims made in an area, the higher the rates will be.

In your particular ZIP code, factors that can drive rates higher include the number of:

What is a tort state?: Thirty-eight states use the tort system, which means that someone is found at fault for every accident that involves car insurance, even if the fault is determined to be 50/50 between two drivers.

What is a no-fault state?: Under the no-fault system, car insurance companies pay for certain damages (typically bodily injuries) regardless of who was at fault. Laws vary among the 12 states that have no-fault insurance.

No pay, no play states: In states with “no pay, no play” laws, driving without insurance is even more risky than in other states. Uninsured drivers in these states are not compensated for any damage, even in accidents that are not their fault.

Which states share speeding ticket information?: Many states have formal agreements with each other, such as the Drivers License Compact and the Non-Resident Violator Compact, to share information regarding traffic tickets when drivers are ticketed out of state.

Leave a Comment
Ask a Question
Comments
Tell us your thoughts
Leave a Comment
1 Responses to "Auto Insurance Rates By State"
Disclaimer: Answers and comments provided are for information purposes. They are not intended to substitute informed professional advice. These responses should not be interpreted as a recommendation to buy or sell any insurance product, or to provide financial or legal advice. Please refer to your insurance policy for specific coverage and exclusion information. Please read our Terms of Service.