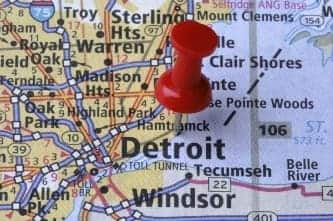 The highest car insurance rates in the nation belong to Detroit, according to CarInsurance.com's analysis of rates for a 2016 Honda Accord with full coverage for nearly every ZIP code in the country.

Drivers can enter a ZIP code in CarInsurance.com’s average car insurance rates tool to see the average premium for the location, as well as the highest and lowest rates. You can get a customized rate by choosing from among six age groups for men and women and three coverage levels.

Rankings were determined by identifying the highest ZIP code for car insurance in each state and then listing them in descending order.

The top 10 most expensive ZIP codes by state for full coverage car insurance are:

Most expensive ZIP codes for car insurance by state

To find the most expensive ZIP code for car insurance in every state, see the table below.

Motor city madness: Why are car insurance rates so high in Detroit?

What ZIP codes are the lowest for car insurance rates?

To find the least expensive ZIP code for car insurance in every state, see the table below.

The cheapest ZIP code for car insurance, Fremont, Ohio, is about 40 miles from Toledo and has a population of about 17,000. Freemont is typical of locations that tend to have low car insurance rates. Drivers in rural areas generally pay less than drivers in urban areas. Rural areas have fewer cars on the road, so costs for insurers are lower because there are fewer accidents, claims and thefts.

Each state’s car insurance laws also come into play, as some state minimum liability requirements are much lower than others.  “Ohio has minimum limits of 25/50/25 for liability, with no requirement for PIP, which helps keep down rates,” says Penny Gusner, consumer analyst for CarInsurance.com. “Ohio also has a healthy car insurance market.  With plenty of regional and national auto insurers, motorists have companies competing for their business and can readily obtain low car insurance premiums by shopping around and comparing rates.”

Why car insurance rates vary so much among insurance companies

Car insurance companies assess many factors when setting rates, and your location is chief among them. Based on the number and severity, or cost, of car insurance claims within the area, insurers assign ZIP codes different risk levels. Insurers take into account the frequency of thefts, collisions and vandalism to gauge the likelihood of such incidents happening to drivers within the ZIP code. This is used as the base rate from which insurers calculate your premium. Other pricing factors, such as your driving record, type of car you drive and your age are then added into the calculation.

To estimate car insurance costs, you can take into account your age, the level of coverage you need and your location.

Every car insurance company uses its own base rate and formula, which is why rates can vary so much, and why it's important to comparison shop to get the best cheap car insurance. For instance, CarInsurance.com’s rate analysis found the following potential savings, or the difference between the highest and lowest price, for the same policy:

CarInsurance.com commissioned Quadrant Information Services to provide a report of average auto insurance rates for a 2016 Honda Accord for nearly every ZIP code in the United States. We calculated rates using data for up to six large carriers (Allstate, Farmers, GEICO, Nationwide, Progressive and State Farm).

Averages for the default result on the average rates tool are based on full coverage insurance for a married 40-year-old male who commutes 12 miles to work each day, with policy limits of 100/300/100 ($100,000 for injury liability per person, $300,000 per accident and $100,000 for property damage in an accident) and a $500 deductible on collision and comprehensive coverage. The rate includes uninsured motorist coverage. Rankings are based on this default driver profile. ZIP codes in ranking were the highest ZIP code for car insurance in the state, ranked by descending order. Rankings for the cheapest ZIP code were in ascending order from lowest premium.

Averages for customized rates in the tool are based on drivers ages 20, 30, 40, 50, 60 and 70 for the following coverage levels: state minimum liability, liability of 50/100/50 and 100/300/100 with $500 deductible on comprehensive and collision. These hypothetical drivers have clean records and good credit. Average rates are for comparative purposes. Your own rate will depend on your personal factors and vehicle.

Leave a Comment
Ask a Question
Comments
Tell us your thoughts
Leave a Comment
8 Responses to "Most and least expensive ZIP codes for car insurance by state"
Disclaimer: Answers and comments provided are for information purposes. They are not intended to substitute informed professional advice. These responses should not be interpreted as a recommendation to buy or sell any insurance product, or to provide financial or legal advice. Please refer to your insurance policy for specific coverage and exclusion information. Please read our Terms of Service.