Personal injury protection (PIP) insurance helps pay for your medical bills and lost wages when you or your passengers are injured in a car accident.

Here we'll explain what personal injury protection coverage is, and how it works. Also known as PIP coverage, this part of your car insurance  helps to pay for medical expenses regardless of who's at fault, and often includes lost wages. In some states, PIP is a required add-on to your coverage, in others it's optional. PIP varies significantly by state, but typically covers you, your passengers and drivers listed on your policy. Now let's explore what PIP insurance is in detail.

PIP also covers you if you are injured as a passenger in someone else's car, or if you're hit by a car while walking or biking. PIP insurance is different than bodily injury liability insurance  that is required to drive legally. PIP coverage pays for your expenses, while liability insurance pays for the medical expenses of others injured in an accident you cause.

What does personal injury protection cover? 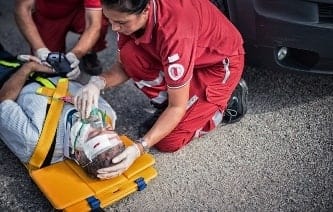 PIP insurance pays a per-person benefit amount for injuries you and others specified in your policy sustain in an auto accident. Basic personal injury car insurance coverage is for the insured's own injuries on a first-party basis, without regard to fault.

Parties typically covered by PIP include:

The exact benefits offered by PIP vary by state, and there may be a deductible due before the benefits kick in. Coverage varies widely among states, so the terms of your policy will note your specific benefits, but in general personal injury protection coverage includes:

Your PIP limits set the maximum amount that will be paid per person for any combination of covered expenses. PIP limits vary by state; some states allow you to choose your PIP limits and others set it to a certain amount like $10,000, unless you choose to buy additional PIP coverage.

Yes, in no-fault states, personal injury protection coverage is required (and is typically referred to as no-fault coverage). In other states, it’s optional, if available at all.

There are 12 states that are considered no-fault and PIP coverage is required:

You'll see in the table below, these 12 states, as well as the five states that are not at-fault states but still require PIP coverage, and the five states htat are not no-fault and offer it as optional coverage.

The District of Columbia is neither a true no-fault nor add-on state. Drivers are offered the option of no-fault or fault-based coverage, but in the event of an accident a driver who originally chose no-fault benefits has 60 days to decide whether to receive those benefits or file a claim against the other party.

According to the Insurance Information Institute, these states had no-fault laws, but repealed them:

What happens if I don’t have personal injury protection coverage?

If this no-fault coverage is optional in your state and you choose to go without, when you are at-fault in an accident or the at-fault party cannot cover your injuries, you will need to have coverage such as medical payments on your policy or you may end up paying out-of-pocket for your medical bills.

If you have adequate health insurance and your state doesn’t require this coverage, then personal injury protection coverage may be unnecessary.

No, PIP insurance doesn't reimburse you for pain and suffering after a car accident.

How much PIP insurance do I need?

When determining how much PIP insurance you need, begin by considering how you and your family would be affected financially after a car accident that caused injuries.

Your state required PIP minimum coverage amount is likely sufficient if you and family members in your household already have health insurance with excellent benefits. But remember that extra PIP protection will kick in to help cover lost income and to pay for household service expenses.

If you and your family members don't have health insurance or have a plan that doesn't offer all the benefits of PIP, consider getting as much PIP coverage as you can afford.

PIP insurance may include some of the same benefits as your health insurance plan or Medical Payments policy. PIP coverage, however, is specifically written for car-related injuries, which are sometimes excluded from health insurance policies, and PIP insurance covers a number of additional expenses not covered by MedPay insurance.

How much does PIP insurance cost?

To give you an idea of how much PIP insurance costs, below is an example of driver with a clean record, living in Tampa, Florida. The rates are for a policy including PIP insurance for up to $10,000, $100,000 for bodily injury liability, up to $300,000 per accident, and including comprehensive and collision with a $500 deductible. The average rate for PIP for a full coverage policy in Tampa was $366, among the insurers analyzed. That turns out to be about 16% of the total rate.

Additional personal injury protection is available in some states (and by only some carriers) where PIP is available. Additional PIP acts as a supplement to the PIP coverage required by your state. It allows you to raise your PIP maximum limit amount.

Extended personal injury protection is available in Florida where personal injury protection coverage typically pays 80% of medical expenses and 60% of lost wages. Purchasing extended PIP allows you to amend your PIP so that 100% of medical expenses and 100% of lost wages will be paid (up to the maximum limits of your PIP coverage). The Florida Department of Financial Services Insurance Library gives more information on increased PIP benefits.

Guest personal injury protection is available in Kentucky and provides coverage to guest passengers in your vehicles. It is required when all drivers on your policy have rejected no-fault coverage. (Kentucky is a choice no-fault state).

In states such as New Jersey, you have to choose a Personal Injury Protection Plan. Here is a description of those choices:

Full PIP Primary acts as the primary coverage for injuries sustained by you or your passengers in an auto accident. This option also covers income continuation, funeral expenses, death benefits, and essential services expenses.

Full PIP Health Primary should be purchased if another health insurance provider acts as the primary coverage for injuries sustained by you or your passengers in an auto accident. This option also covers income continuation, funeral expenses, death benefits, and essential services expenses, as detailed below.

Full PIP health primary coverage is not available if you use Medicare or Medicaid as your primary health insurance or if you are an active member of the military. In addition, some health insurers do not cover injuries related to car accidents. If you are unsure of what your health insurance covers, you should select full PIP primary or medical only PIP primary.

Medical Only PIP Primary acts as the primary coverage for injuries sustained by you or your passengers in an auto accident.

Medical Only Health Primary should be purchased if another health insurance provider acts as the primary coverage for injuries sustained by you or your passengers in an auto accident.

What is a resident relative under personal injury protection coverage?

The definition of a resident relative can differ depending upon state laws as well as the language (terms) of an auto insurance policy.

A typically insurance policy defines a resident as someone who has physical presence in your household with the intention to continue living there. Unmarried dependent children, while temporarily away from home, to attend college for example, are normally still considered residents if they intend to continue to live in the parents' household during breaks from the school year.

The court noted he was not a full-time student, lived with his grandparents for the 11 months preceding the auto accident and during that time only visited his parents' home approximately four to six times. So the court of appeals found he was not a "resident" of his parent's home as defined by their insurance contract with their carrier.

The court reasoned that according to the policy language the plaintiff would be a resident only if he physically lived in his parents' house, was under the age of 24 and attended school full-time.

Who will be considered a resident relative in regards to your personal injury protection (PIP) coverage will depend upon the definition of a "resident relative" your state has in place as well as the language of your policy regarding this term and your PIP coverages and exclusions.

If your resident relative has his own insurance policy, your PIP coverages may not extend to him, depending again on state laws and your policy's terms. For example, in 2007 New Jersey courts decided that a plaintiff in a court case could not recover PIP benefits from both her own auto insurance policy and her mother's policy.

In this New Jersey court case, the plaintiff was involved in a car accident in which she sustained extensive injuries. She was operating her privately owned vehicle at the time of the accident and was insured by her own insurance company for $75,000 worth of PIP benefits. Her medical bills exceeded this amount. At the time of the accident, the plaintiff lived with her mother, who was the named insured on an automobile policy issued by a different insurance carrier and had PIP benefits of up to $250,000. Since the mother's limits were higher, she tried to place a claim with her mother's PIP policy for the medical bills in excess of her $75,000 PIP coverages of her own policy.

The mother's auto insurance policy extended coverage and PIP benefits to resident relatives, although subject to exclusions. One such exclusion was the denial of liability coverage and PIP benefits to resident relatives for injuries sustained as a result of an accident involving a vehicle owned by a resident family member. So, according to the terms of the mother's policy, the daughter was excluded from making her PIP claim since the accident took place in her own vehicle which had its own coverage.

New Jersey law section 39:6A-4.2 authorizes PIP benefits not only to the named insured but also to resident family members of the insured's household, provided the resident family members are not named under their own policies. This section of the statute also says that no person can recover PIP benefits "under more than one insurance policy for injuries sustained in any one accident."

To find out about your state laws with regard to resident relatives, check with your state's insurance regulator. For information on the language of your policy and the exclusions it may have, read over the terms of your policy, specifically the PIP portion.

What is PIP fraud or no-fault fraud?

PIP fraud is when a system is setup to illegally get payment for PIP claims from an insurance company on behalf of the policyholder.

One type of PIP fraud involves staging a fake car accident so that bogus injury claims are paid out through a person's PIP coverage. In this example, clinics are set up to sign off on the fake injuries, making it appear that the person was treated, so that both parties will receive money from the driver's PIP policy.

Get Personalized Car Insurance Quotes
Leave a Comment
Ask a Question
Comments
Tell us your thoughts
Leave a Comment
1 Responses to "What is Personal Injury Protection (PIP) and Why Should You Have It?"