Updated on: Feb 15, 2011
Editorial Integrity - Why you should trust us?
Our mission is to help you make educated insurance decisions with confidence. We have an advertising relationship with some of the offers included on this page. However, this doesn’t influence our editorial judgment or recommendations. The rankings and listings of our reviews, tools and all other content are based on objective analysis, and we fully own our opinions.

The 5 most dangerous traffic situations

Written by:
Our Carinsurance.com team is made up of regular people with insurance policy needs, just like you. We just happen to know a little more about insurance than the average bear.
twitter 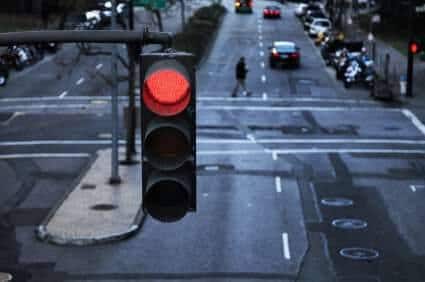 Speeding, tailgating and road rage are some of the obvious dangers you’ve probably encountered on the road.

And these are some of the leading causes of accidents, says Walter G. Meyer, a 20-year veteran traffic-school instructor in San Diego.

But there are several other accident hot spots that don’t get as much attention. By knowing what they are, you can better keep your claims record clean and your car insurance rates down.

“A majority of accidents are caused at intersections with stop signs and traffic lights [and are] due to drivers either not paying attention or being in a life-threatening hurry,” says Jason Ratcliff, a Franklin County, Ohio, Deputy Sheriff for 15 years assigned to the patrol bureau and to work traffic enforcement.

Ratcliff says the best way to stay safe in — or near — an intersection is pay attention.

“When approaching intersections, private drives and retail stores, pay particular attention to others poised on the sidelines ready to pull out in front of you,” says Ratcliff. Don’t rely on your “right of way.”

Even if it’s your turn to go through the intersection or you have a green light, look around and ask yourself, “What if that car pulls out in front of me?” suggests Ratcliff.

“And always scan cross streets for drivers whose heads might be in the clouds and don’t notice they have a red light or a stop sign,” he adds.

Those few seconds of scanning can save you from a host of injuries and auto insurance claims headaches.

At the scene of an accident

Exiting your car if it breaks down or after an accident is high on Ratcliff’s list of no-nos.

“It’s one of the most dangerous things you can do,” he says — especially on a heavily traveled route.

You could find yourself being struck by a distracted driver.

“You should always stay in your vehicle if you’re in an accident,” says Ratcliff. “And don’t get out of your car to assist another driver.”

The best way to help a stranded motorist is by calling police or roadside assistance and not risking your life, says Ratcliff.

Statistics show this is not a good idea. According to the U.S. Department of Transportation, an average motorist could drive a billion miles — the distance from Earth to Jupiter and back — before getting into an accident stemming from a right-hand turn.

Some towns are reducing left-turn accidents by using a “Michigan left” intersection design, which prevents motorists from making a left turn. Instead, you have to make a legal U-turn at a designated spot and then a right-hand turn back onto the street. This reduces accidents by nearly 60 percent.

Be patient when making left turns. “And always use your turn signal to alert the car behind you you’ll be slowing down, and possibly stopping, to turn left,” says Meyer.

Driving up a hill (or crest) may mean you’re going to have to go back down the other side.

“This is particularly dangerous because you’re driving blind,” says Meyer.

You have no idea if there’s a deer in the middle of the road just on the other side of the hill or if a stopped school bus is letting kids out — unless you’re paying attention to street signs.

“Many accidents and dangerous situations can be avoided by paying attention to the signs on your way up the hill,” says Meyer.

Traffic signs will typically indicate if an intersection, driveway or school zone is nearby. And if the area is a favorite place for Bambi and friends to play, street signs will tell you that, too.

“Look around for those indicators and take appropriate precautions,” says Ratcliff.

“Slow down when you’re nearing the top of the hill to make it easier to stop in case there is something in your path,” adds Meyer.

Sitting in a truck’s blind spot

If you can’t see a commercial truck’s sideview mirrors, they can’t see you.

“When they try to change lanes they’ll smash right into you,” says Ratcliff, adding that it’s best to give these vehicles plenty of room to move. And no matter what, don’t place yourself right next to them.

“If you and a tractor trailer are traveling neck-in-neck, at the same speed, slow down to let him take the lead,” says Meyer. The trucker might win the race to the rest stop, but you’ll be more likely to make it there in one piece.