Published on: Jul 25, 2018
Editorial Integrity - Why you should trust us?
Our mission is to help you make educated insurance decisions with confidence. We have an advertising relationship with some of the offers included on this page. However, this doesn’t influence our editorial judgment or recommendations. The rankings and listings of our reviews, tools and all other content are based on objective analysis, and we fully own our opinions.

Find out how many parents text while their teens are in the car, how many don't enforce state teen driver safety laws, which ones and why, based on findings of a CarInsurance.com survey of 3,000 parents. 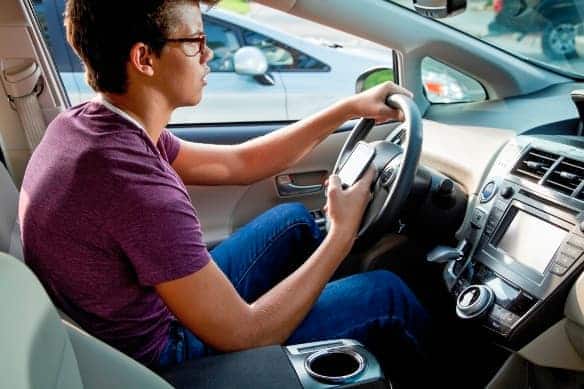 Nearly one-quarter of surveyed parents said they don’t apply teen driver saftey rules to their children, and of those parents, nearly half don’t enforce cellphone restrictions. And, half of parents admitted to texting while driving with their teens in the car.

CarInsurance.com surveyed about 1,000 parents of teens to find out what role they play in helping their children comply with Graduated Driver License (GDL) laws designed to keep teen drivers safe. States restrict teens through GDL laws, which in many states limit when teens can drive and who’s in the vehicle. Many of these states maintain the restrictions until drivers turn 17 or 18, but there is a growing movement to expand those limitations. New Jersey currently is the only state that has GDL laws until the age of 21.

The CarInsurance.com survey found that nearly one-quarter of parents surveyed said they either sometimes or never enforce GDL laws for their teens.

Parents who fail to have their teen drivers comply with GDL laws provided the following reasons:

Of parents who fail to enforce teen driving laws, (respondents could choose more than one topic):

Despite ranking texting while driving as the fourth worst driving habit (behind speeding, distracted driving and failing to stay in the lane while turning) for their teens, many parents text behind the wheel with their children in the car.

The Governor’s Highway Safety Association said 47 states ban text messaging for all drivers. Two of the three states without a texting ban do have texting restrictions for novice drivers.

Here are seven different states to show the differences between regulations:

View our driver texting and cellphone laws and penalties by state list to see what restrictions apply in your state for both teens and adults, and how citations affect your car insurance rates.

According to a CarInsurance.com rate analysis, getting a ticket for texting while driving could increase your rates by as much as 23 percent on average, depending on your insurer, what state you live in and your driving record.

Texting and driving for teens

Despite laws against texting while driving, the National Highway Traffic Safety Administration (NHTSA) found that about 30 percent of teens say they’ve texted while driving. The NHTSA said a teen’s risk of an accident increases six-fold when dialing a phone number.

The NHTSA estimates that 3,450 died in 2016 because of distracted driving and another 91,000 were injured in crashes involving distracted drivers in 2015. The organization said teens were the largest age group reportedly distracted at the time of fatalities.

Other sobering statistics from NHTSA:

How can society work to reduce those numbers? The NHTSA offers these tips:

Even for teens who have a perfect driving record, car insurance rates are super expensive because insurers consider them to be inexperienced, high-risk drivers. Read the car insurance guides below to find average rates by age, state, gender and coverage level, as well as ways to save on teen driver coverage.