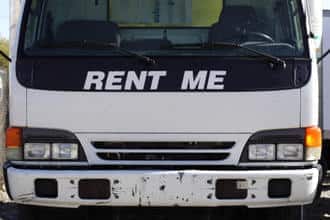 The U.S. Census Bureau estimates that a person in the United States can expect to move 11.7 times in his or her lifetime, and reports that in 2018, 10 percent of people (about 32.4 million) in the United States moved within the past year. That's based on the latest statistics.

U-Haul also says three-quarters of all moves are done by do-it-yourselfers.

That puts a massive number of motorists behind the wheels of large, unfamiliar vehicles cruising around neighborhoods they don't know very well.

Done right, moving yourself could save you a ton of money.

But do it wrong and you could end up with a dented truck that isn't covered by your car insurance policy. Here is what you need to know.

"Don't assume that your car insurance policy extends to a rental truck, because it doesn't," says Penny Gusner, consumer analyst for CarInsurance.com. That's why you need to ask about coverage when you are renting the truck.

How does insurance work for rental trucks?

Your moving truck rental agreement or contract normally will include state minimum liability coverage, which is usually quite low, and that's it. The rental company doesn't require you to show proof of any other insurance to drive the truck away.

Moving truck rental companies make it clear that whoever signs the contract is fully responsible for the equipment and any and all damages - regardless of fault. You'll be charged not only for the repair costs, but also loss of income while the truck is out of service.

Rental truck companies such as Budget truck rentals, Penske and U-Haul do, however, offer protection plans that you can purchase.

The details vary, but they all offer the same basic types of coverages, which usually will include:

Should you buy rental truck insurance?

The cost of the coverage varies from around $14 to $30 a day depending upon the coverage and limit levels you choose. Deductibles can apply.

"If you're moving yourself, you are trying to save money," Gusner says. "But don't blow it because you don't know how to back up a trailer."

All plans with all carriers have exclusions, so read carefully.

For instance, U-Haul's Safemove coverage has an exclusion for a collision with an overhead object and cut, blown, or damaged tires -- which coincidentally are two of the most common types of accidents reported by U-Haul.

Theft is not covered, either -- so don't leave the keys in your moving truck while you go grab a soda.

While U-Haul and the rest of the major moving truck renters won't talk about specific accident rates, they are willing to talk about the kinds of accidents their customers usually have.

The most common damage is drivers hitting overhead objects, on the upper right-hand side. People don't realize the height of the truck and crash into awnings, carports, bridges and even the drive-thru at their favorite fast food spot.

Damaged mirrors and tires and cracked windshields are common as well.

Even the safest of drivers can make a mistake. It can be a costly one if it's in a moving truck since in most cases your personal car insurance won't cover you -- nor will any insurance coverage associated with your credit card.

U-Haul notes that the majority of car insurance companies won't cover their rental trucks due to their gross vehicle weight (GVW) of 9,000 pounds or higher. And rental trailers aren't normally covered by personal auto policies, either.

Most credit cards offer some type of car insurance coverage for rental vehicles, but they typically draw the line at covering exotic cars and moving trucks.

Gusner points out that your insured personal vehicle would be covered if it were damaged on a rented trailer during transport -- if you have collision coverage. You'd still be on the hook for the cost of the trailer itself, though.

Tips for car insurance when moving

Of course you won't be driving the rental truck forever. If you're planning to move, whether across the country or across town, you should be sure to notify your car insurance company. Here are answers to common questions about  car insurance coverage during a move:

Do I have to tell my insurance company I'm moving? Yes. It will need your new address, and also you'll need to be sure you still comply with your state minimum liability requirements if you move to another state. Regardless of the distance of your move, your insurance company will also adjust your rate. Car insurance companies assess the risk you pose, in part, by where you live, so the cost and frequency of claims your ZIP code are used to determine a base rate. That means depending on where you move, your rates may go up or down. To see rates for your new neighborhood, use our average car insurance rates tool, which shows rates by ZIP code for three coverage levels and six age groups. You can also see how much your insurance will go up or down by using our "Will my insurance go up if I move?" tool, also located to the right of this article.

Do I have to switch, or can I just keep the same insurance company? It depends. If you remain in the same state, you can keep your current insurer. If you move out-of-state, you may still be able to stick with the same company, provided your insurance company is licensed to do business in the new state you're calling home. If not, you will have to shop for a new policy.

When should I cancel my old policy? If you’re changing insurance companies, cancel your old coverage only when new coverage is in effect. Don't leave a coverage gap. If your move involves other life changes, such as getting married or buying a home, let your agent know. You might be eligible for new car insurance discounts.

Leave a Comment
Ask a Question
Comments
Tell us your thoughts
Leave a Comment
3 Responses to "Is your rental truck covered?"
Disclaimer: Answers and comments provided are for information purposes. They are not intended to substitute informed professional advice. These responses should not be interpreted as a recommendation to buy or sell any insurance product, or to provide financial or legal advice. Please refer to your insurance policy for specific coverage and exclusion information. Please read our Terms of Service.

Will my insurance go up if I move?