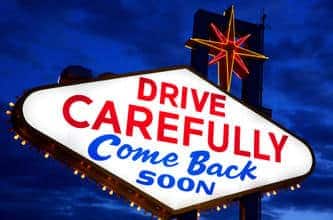 If you’re researching car insurance quotes in Las Vegas or trying to find cheap auto insurance in Las Vegas while shopping for a policy, here you’ll find average car insurance rates for Las Vegas listed by ZIP code and company. That way you can get a reference point for how much you can expect to pay. We’ll also explain how coverage works, and how much car insurance you need. To see rates for your ZIP code, age group and coverage level, enter your ZIP in the average rates tools below.

Drivers in Las Vegas pay the most for car insurance in the state, but regardless of where you live, you can save a considerable amount if you compare rates. This is why:

Downtown Las Vegas ZIP codes pay the most, with rates falling a bit in the suburban areas. (You'll find a map comparing sample rates in all neighborhoods below.) But your address is only one component of your insurance premium, and all companies calculate your rates differently -- even if you live in the priciest ZIP in town.

Here's how Las Vegas’s highest average rate ($2,705)  compares to others, for a full coverage policy:

Here are the 5 most and least expensive ZIP codes for car insurance in Las Vegas. You'll see in the chart below that you can save over $1,000 just by comparing car insurance quotes, no matter which address you call home.

Minimum liability coverage limits of 15/30/10 are required to drive in Nevada. That means your insurance company will pay up to $15,000 per person injured in an accident you cause, up to $30,000 per accident, and up to $10,000 for damage you cause to another car or other property. Buying the state required limits is definitely the cheapest way to go. But your assets and savings aren’t shielded from lawsuits and you won’t be covered for damage to your own car. Additionally, the cost to pay for damages from even a minor accident can easily exceed these limits, leaving you responsible to pay out-of-pocket for repair and medical bills.

Also, bear in mind that Nevada’s state-required liability limits, which are among the lowest in the country, are increasing July 1. The new amount of coverage you need to legally drive will be 25/50/20.  If you opt to buy the current minimum liability, it’s important to know how your coverage and rates will be affected when the minimum requirements increase in July.

It does cost more to buy more protection, but as you’ll see below, additional coverage is typically affordable. Based on an analysis outlined below of rate fielded from six major insurers for Las Vegas ZIP codes, increasing your insurance from the state minimum to full coverage with a $500 deductible costs, on average, $867 more, or $72 a month. Just hiking to higher liability costs just $227 yearly, or $19 a month.

For more details on how comprehensive insurance, collision  and liability work to protect you and your car as well as damage and injuries you cause in an accident, see our Nevada car insurance page or explanations of the different types of car insurance.

Who has the cheapest Las Vegas car insurance rates?

Traffic tickets can make your auto insurance rates skyrocket. How much more you’ll pay depends on the insurance company and state laws.

Getting a traffic ticket doesn’t just result in a fine. Your car insurance rates may also go up.

The increase can stay on your auto insurance for five years. DUIs and other serious charges often remain on your driving record longer than a minor offense, such as speeding.

Here’s how much more you’ll pay, on average, for the following traffic violations.

CarInsurance.com commissioned Quadrant Information Services in 2019 to field rates from up to six major insurers for 10 ZIP codes in the city for the following driver profile: male, age 40, good credit, clean driver record, driving 2017 Honda accord. We compared the clean record driver rate to the rate for various tickets and accident claims to get the average percentage and dollar increase, for the coverage level of 100/300/50; with comprehensive and collision and $500 deductible. These are estimates; your actual rate will depend on your personal rating factors.

How much will my insurance increase after an accident in Las Vegas?

Being at-fault in a car accident usually leads to higher rates. Some insurers may give you a pass for one accident. However, you’d see much higher rates if you get into a second crash.

Here’s how accidents will increase your rates on average.

CarInsurance.com commissioned Quadrant Information Services in 2019 to field rates from up to six major insurers for 10 ZIP codes in the city for the following driver profile: male, age 40, good credit, clean driver record, driving 2017 Honda accord. We then averaged rates by company for each city for the following coverage level: 100/300/50, with comprehensive and collision and a $500 deductible. These are estimates; your actual rate will depend on your personal rating factors.

Credit history is a factor in how much you pay for car insurance. Insurers view people with poor or fair credit as a bigger risk. They’re more apt to file claims, insurance companies believe.

Las Vegas drivers with poor credit pay more on average for car insurance than people involved a car accident or charged with DUI.

You’ll pay more having poor or fair credit in Las Vegas, but the costs aren’t as bad as Michigan, New Jersey, Arizona, and other worst states for drivers with bad credit.

Putting a 16-year-old driver on your auto insurance policy in Las Vegas increases your rates more than if you were at fault in an accident or charged with a DUI.

So, parents pay much more when they add teens to their policies. Make sure to talk to your insurer about any possible discounts to help you reduce your rates. That includes good student discounts, which many insurers offer.

Find out more about adding a teen to your car insurance.

How much more do you pay for gap insurance in Las Vegas?

Gap insurance pays the difference between a vehicle’s actual cash value (ACV) and the current outstanding balance. The coverage is for people who purchase a new car and then take a large loan or lease on the vehicle.

Gap insurance doesn’t consider what you paid for the car. Instead, it’s about the loan and what the car is actually worth.

Gap insurance would add on average $47 or 2% to your annual car insurance costs in Las Vegas.

How much SR-22 insurance costs you in Las Vegas

SR-22 is an option for drivers if you’re convicted for a serious moving violation. Those violations include a DUI, reckless driving or driving without insurance.

With an SR-22, an insurer guarantees that you’re carrying legally mandated coverage.

If you have an SR-22 and a DUI conviction, the average car insurance increases by $1,141.