Updated on: Jan 23, 2011
Editorial Integrity - Why you should trust us?
Our mission is to help you make educated insurance decisions with confidence. We have an advertising relationship with some of the offers included on this page. However, this doesn’t influence our editorial judgment or recommendations. The rankings and listings of our reviews, tools and all other content are based on objective analysis, and we fully own our opinions.

Why synthetic oil works well in the winter 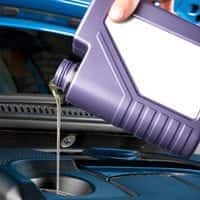 In low temperatures synthetic engine oil can flow better through the engine lubrication system thus allowing the car owner to be able to crank the car in the lowest of temperatures. For anyone who lives in a cold climate they know getting a car started in cold temperatures can be half the battle. The quicker the oil pumps through the engine the faster the car can be started and the heater can be turned on.

Synthetic oil has friction modifiers as an additive which allows for more horsepower but with better fuel economy. Though you may not be driving as much during the cold winter months it is likely the car will spend a lot of time warming up and thus guzzling gasoline during that time period.

Synthetics motor oil’s main reason for working so well in the winter is because of its abilities to withstand the extreme temperature lows. The chemical makeup of the synthetic keeps the lubrication fluid less likely to congeal or freeze up. The better flow allows the engine to work better in lower temperatures.

Changing from conventional to synthetic oil can be a wise choice for the winter. If you live in an area that often has prolonged cold snaps there are many advantages for you and your vehicle. The main point is that because synthetic motor oil can flow well in low temperatures allowing your car to start on the coldest of days.

The car cranks and starts quicker which will reduce the power needed by both the starter and battery. This allows extra strain to not place on either of these parts. With an easier start you engine should be found to be more reliable and durable. A durable engine will get you through the cold winter months and into the warmth of spring and summer.

Synthetic oil won’t get you car insurance discounts, but a car in top shape — with the documents and photos to prove it — will get a bigger check if it is ever stolen or totaled.

Learn more about You and your car