Updated on: Jul 09, 2013
Editorial Integrity - Why you should trust us?
Our mission is to help you make educated insurance decisions with confidence. We have an advertising relationship with some of the offers included on this page. However, this doesn’t influence our editorial judgment or recommendations. The rankings and listings of our reviews, tools and all other content are based on objective analysis, and we fully own our opinions.

Where the insurance cheaters live 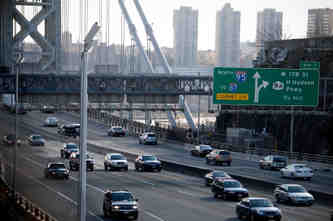 Registering and insuring your vehicle using your sister’s address in the next state or your parents’ house in a neighboring country might seem a clever way to save money on your car insurance rates.

In some cases, doing so might save you hundreds or even thousands of dollars a year. In Bullhead City, Ariz., for example, a 40-year-old man driving a 2012 Honda Accord would pay about $729 a year. But across the Colorado River in Laughlin, Nev., the same driver would pay about $1,580.

Compare what drivers pay in these neighboring ZIP codes:

You can check out the differences in your city with our average car insurance rates calculator.

The temptation is clear enough. But if you’re caught with your car registered at the wrong location, you could see your auto insurance claim invalidated or a bill for unpaid premiums in your mailbox.

And if you live in New Jersey, you might soon face criminal charges.

So what’s the harm in cheating?

While fudging on your address might seem harmless enough, it’s a practice known as rate evasion, and it’s considered a form of insurance fraud. A 2010 report by Quality Planning Corp., an industry analyst, put the cost to insurers at more than $1 billion a year.

“It’s one of those issues that cause consternation,” says Howard Goldblatt, director of government affairs with the Coalition Against Insurance Fraud in Washington, D.C. The nonprofit’s membership is made up dozens of insurance companies, consumer groups and government organizations.

With rate evasion, people claim to live in another state or that their car is garaged there, in order to pay lower insurance rates. They might also say they live in another, less costly country in the same state.

If you say you live in Pennsylvania and you actually live in New Jersey, “you’re posing a risk here but you’re not paying for that risk,” says Chuck Leitgeb, vice president of the Insurance Council of New Jersey. The insurance advocacy and research group comprises 20 companies that together underwrite two-thirds of the state’s auto policies.

Residents of your home state whose vehicles are registered in the right location end up covering your share of the costs by paying higher auto insurance rates, Leitgeb says.

And drivers of the state you falsely claim as your own face higher premiums if you have an accident — because your wreck makes their statistics look worse than they actually are.

Rate evasion can have unexpected consequences. The Michigan news site MLive.com found that a large number of Detroit residents had registered their vehicles in other, less expensive parts of the state, depressing the number of registered voters in the city.

Where the cheaters live — and don’t live

Rate evasion is particularly common in states such as New Jersey, New York and Florida – all states with sky-high auto insurance rates in some of their metro areas. Residents will use an address or a P.O. box in another location to register their vehicles.

In certain areas of New Jersey, especially northern, urban areas, and the southern part of the state bordering Pennsylvania, it’s not uncommon to see plenty of cars with out-of-state license plates regularly parked in people’s driveways and on residential streets, Leitgeb says.

It’s a similar situation in New York, where cars from North Carolina and Pennsylvania can be found parked in the middle of the week on Brooklyn streets, Goldblatt says. Prosecutors report dozens of vehicles registered at some Pennsylvania addresses.

Many people get away with evading rates. Others don’t.

Their fraud may be discovered once a claim is filed. If insurance companies suspect you’re a rate evader, they can pay a company such as Lexis-Nexis to do a public records search. If your car is insured in North Carolina but your phone bills go to New York, you may have a problem.

Or their neighbors may turn them in. “It drives people crazy,” New York state Sen. Diane Savino told the New York Post. “Constituents are calling my office to report motorists who have out-of-state license plates.”

New York legislators have even proposed a reward for doing so. Some states, such as California, already have online systems to report cheaters.

The worst that can happen? Prison.

Some states are moving to crack down on the practice of rate evasion. North Carolina and Idaho, which have some of the lowest auto insurance rates, have made it tougher to register a vehicle there.

In Pennsylvania, the Attorney General’s Office has stepped up rate evasion prosecution. Last year, for example, a New Jersey man and 11 co-conspirators were charged with illegally providing Pennsylvania vehicle registrations and insurance to people who lived in other states.

Now New Jersey has the practice in its sights. Under current state law, New Jersey’s Office of the Insurance Fraud Prosecutor can’t prosecute such cases because they’re not considered a form of insurance fraud.

But that soon could change. A bill working its way through the state’s Legislature would classify rate evasion as insurance fraud, with varying levels of criminal penalties if someone is convicted, including up to 18 months in jail.