The National Highway Traffic Safety Administration (NHTSA) just ordered General Motors to recall nearly six million trucks and SUVs that have defective air bags, made by Takata, a Japanese manufacturer that was at the center of one of the largest recalls in recent history. 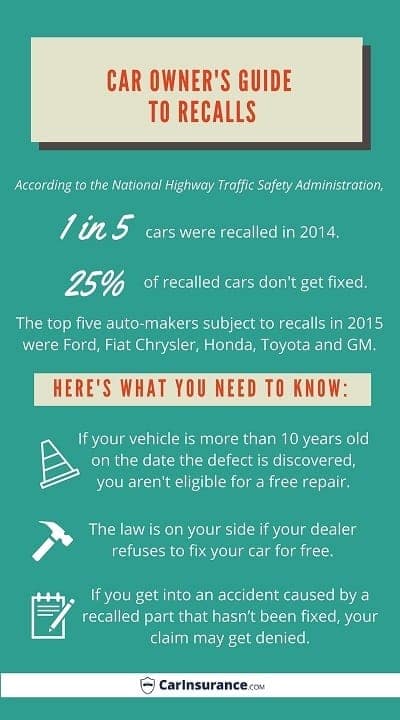 To ensure more safety on the roads, it’s critical that consumers are educated about recalls and understand what actions they can take to get their vehicles fixed. Here’s what you should know:

How are recalls initiated?

Recalls are initiated when a vehicle or part of a vehicle doesn’t meet minimum Federal Motor Vehicle Safety Standards and poses a safety risk for drivers, passengers and other motorists.

Recalls can involve safety-related defects such as faulty steering components that cause a driver to lose control of a vehicle, wiring system issues that become fire hazards or defective accelerator controls. Non-safety related defects include faulty air conditioners and radios or normal car battery issues.

Either a car manufacturer or NHTSA will issue a mandated recall of a car or car part, which can occur after NHTSA receives several reports about safety defects on a particular vehicle, launches an investigation and orders an automaker to issue a recall.

Car manufacturers also have departments dedicated to reviewing every customer complaint. If complaints about a defect go above a certain threshold, an automaker will consider whether it is serious enough to warrant a recall, Shah says. About 98% of recalls are voluntary, she says.

How will I be notified?

Whether the recall is voluntary or mandated, automakers are required to notify their customers by first-class mail and repair the issue for free.

The notification typically includes details about the safety risk the defect poses, provides instructions about how to repair the problem and how long the repair will take.

If you haven’t received a letter but think your vehicle is part of the recall, contact NHTSA’s Vehicle Safety Hotline at 888-327-4236 or 800-424-9393 or search for recalls using your VIN number on www.safercar.gov. It’s also a good idea to contact your car’s manufacturer for more information.

How do I get my car fixed?

After a recall is issued, an automaker is required to either repair the car or defective part for free, replace it or issue a full refund for the purchase price of the car (minus depreciation).

Even if you’ve purchased a used car or the car is no longer under warranty, a car dealer can search for open recalls by VIN number and repair the issue.

“It’s the obligation of the auto manufacturer to have it fixed, and of course the obligation is that the car can be fixed whether you bought it new or used,” says George Hoffer, an economics professor at the University of Richmond who has spent more than 40 years researching recalls. “You just have to take it to the authorized dealer of that brand and then the factory reimburses that dealer.”

What if I paid for the repairs prior to the recall?

If you’ve paid for repairs before a recall is issued, you may be entitled to reimbursement depending on the circumstances. Car manufacturers are required to reimburse car owners based on either the date NHTSA launches an engineering analysis (a key part of its investigation) or the year before the automaker notifies the agency of the safety defect, whichever date comes first.

Car owners who’ve already paid for a repair are eligible for a reimbursement up until 10 days after the manufacturer sends the final notices about the safety recall to customers.

An auto manufacturer is required to issue a free replacement for these car owners up until 30 days after it issues final notices about the recall. To be reimbursed, car owners are required to provide documentation of the pre-recall repair costs they’ve incurred.

Are there exceptions to getting free repairs done?

If your vehicle is more than 10 years old on the date the defect is discovered, you aren’t eligible for a free repair. Automakers determine the age of the vehicle based on when it was sold to the original owner, so if you’ve purchased a used car this stipulation will affect you.

Still, it’s important that car owners get safety defects repaired, even if they have to pay for it themselves. Ignoring a safety recall could put you and other drivers in jeopardy.

What do I do if my dealer refuses to fix my car for free?

Fortunately, the law sides with car owners in these cases. Legal agreements between authorized dealers and automakers require the dealer to do a free repair when there’s a recall, even if you didn’t originally purchase your car at that location.

However, it’s important for car owners to understand that there’s often a gap between when an automaker or NHTSA determines a recall is necessary and when a car manufacturer informs consumers of a remedy for the recall.

During this time lag a dealer is not required to do a free repair, so it’s best for car owners to wait until they receive a notice to correct the repair. If the issue is urgent, a manufacturer may send a notice in the meantime about what actions car owners can take to reduce the likelihood the defect will happen. Seeking reimbursement for a pre-recall repair also is an option.

Recalls don’t expire, but if you get into an accident involving a recalled part that hasn’t been fixed, your insurance company may deny your claim, according to Penny Gusner, a consumer analyst for CarInsurance.com.

“If you continued to drive your car for a substantial amount of time after being aware there was a defect, it’s believed that you understood the risks and didn’t take due care,” Gusner says. “For this reason, your insurance company may be able to turn down claims for your vehicle if the defect causes you to crash.”

If you filed an insurance claim before the recall and have comprehensive coverage, your insurer should pay out the claim and the car manufacturer should reimburse them.

“Your insurer can go after the car maker to recoup their claim costs,” Gusner says. “They will, of course, have to submit paperwork proving that the defective part caused the accident it paid out.”

Why some recalled parts never get fixed

According to NHTSA, on average 25 percent of recalled cars don’t ever get fixed.

There are plenty of reasons why, according to several studies. Hoffer conducted research over a decade ago that indicated the age of the car and the severity of the recall affect whether the defect is repaired.

“The newer the vehicle, the more likely it is to be returned. This makes sense because it’s in the hands of the person who bought the car from the original dealer,” he says.

“The more severe the recall type (loss of steering control and fires, for example), the greater the response,” Hoffer adds.

The language automakers use to notify consumers about a recall may have an impact, too. A 2013 study by researchers at Stony Brook University found the language car manufacturers use conveys less of a sense of urgency and risk than the language NHTSA uses to describe recalls (including the word “death,” for example). This may impact whether car owners get their vehicles fixed.

“We find that notification letters, through alerting language used to describe the risk of not correcting the defect, play an important role in increasing the correction rates,” researchers Yong-Kyun Bae and Hugo Benitez-Silva said in the study.

But the onus can’t solely be on car manufacturers. Car owners must be more vigilant to keep themselves safe. And this begins with awareness. NHTSA recently launched a recall spotlight feature on its site to give car owners the latest information on recalls.

The agency also advises car owners to check for open recalls at least twice a year using its free VIN lookup tool. Subscribing to a free app like myCarFax, which sends recall alerts, also can keep you informed.

Experts say automakers can do several things to improve safety, too. Shah suggests focusing on more standard options could reduce assembly line errors that lead to recalls. The Stony Brook researchers also suggest that regulating the language used in recall notices could ensure more car owners get their vehicles repaired.

Hoffer says adding service perks like a free oil change could incentivize more car owners to do repairs. Still, an ounce of prevention is worth a pound of cure.

“Some recalls are amazingly cheap to fix and others are super expensive, but the bottom line is a recall is costly, so clearly there should be an incentive on the part of the manufacturer to minimize them.”