Updated on: Feb 06, 2012
Editorial Integrity - Why you should trust us?
Our mission is to help you make educated insurance decisions with confidence. We have an advertising relationship with some of the offers included on this page. However, this doesn’t influence our editorial judgment or recommendations. The rankings and listings of our reviews, tools and all other content are based on objective analysis, and we fully own our opinions.

Does a garage cut your car insurance? 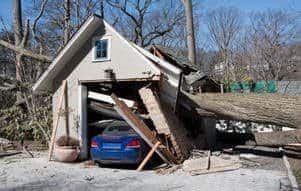 It may seem logical that parking your vehicle in a garage overnight protects it from vandals, thieves and the elements. But in most cases, there’s no correlation between whether you park in a garage and what you pay for car insurance.

Unless you own a classic car, few car insurance companies will even ask.

Amica is one insurance company that still asks customers where their cars are parked at night. But Shannon Rodgers, assistant vice president of sales and client services, says “even asking that question is taking a walk down memory lane.”

It’s mainly a habit, she says. While the company continues to ask the question, it “has nothing to do with (setting) rates,” she says.

Over the years, insurance companies have found that the prospects of a customer having to file an insurance claim “are not much different if a car is parked in the driveway versus in the garage,” she says.

But if having four walls around your car doesn’t matter as you look for the cheapest car insurance, what does?

Who’s got the room, anyway?

While parking your car in a garage might decrease the likelihood of vandalism or a falling tree limb, insurers also seem to be realistic about how many motorists actually use their garages.

Penny Gusner, consumer analyst for CarInsurance.com, recently checked auto insurance rates for family members in California, Ohio and Florida. None of the insurers asked whether the vehicles were parked in a garage overnight.

And one insurance agent told her that while many people have garages, they’re often so filled with belongings that there’s no room to park.

Instead, car insurance companies focus on factors backed up by data, such as the make and model of your vehicle, your driving record, who else drives the car, how the particular type of vehicle you drive fares in collisions, and your credit score, says Chris Hackett, director of personal lines with the Property Casualty Insurers Association of America.

Where you park matters — a lot — but it’s the ZIP code that determines your rate, not whether you have a garage. Insurers pay close attention to the claims history in a particular geographic region, Hackett says.

It’s the ZIP that hurts

Rates are lower in rural areas than urban ones because “you’re more likely to have an accident in the city in the heart of rush hour,” than if you live in a rural location, Hackett says.

When setting rates, insurers will look at things such as that area’s claims for auto theft, property stolen from vehicles, vandalism, or damage caused by a natural disaster, says Frank Scafidi, spokesperson for the National Insurance Crime Bureau.

There also can be great variations within an urban area.

A CarInsurance.com comparison of average car insurance rates for a half-dozen ZIP codes in Tampa, Fla., found that premiums varied by more than $400 a year for the same 40-year-old man.

An auto insurer wants to know the ZIP code a vehicle is parked at night because the premiums the owner is charged reflect the risks involved in that location, Rodgers says.

And it doesn’t pay to try to hide that fact.

Some motorists will register their vehicle in one state, rather than the state where they actually live, in order to take advantage of lower car insurance rates.

That is considered rate evasion, Scafidi says, and can prove costly if you need to file a claim and authorities find out where you really live. If you’re caught falsifying your residence, your claim will be void. New York, for example, recently went after scofflaws who claimed out-of-state residency.

A special car needs a garage

It’s a different story if you own a classic car, says Jonathan Klinger, spokesperson for Hagerty, which specializes in insuring classic and collectible cars.

Having a vehicle stored in a locked garage is among the requirements to qualify for insurance from Hagerty. Keeping it in the garage of your condo or in a locked storage unit also qualifies.

If you keep your classic car “outside under a cover or under a carport, you’re not eligible,” Klinger says.

Most classic-car insurers want a photo of the garage.

Unlike insuring the vehicle you use for your daily commute, a classic or collectible auto is insured for its agreed-upon value. So if your 1965 Ford Mustang is worth $35,000, that’s how much the policy is written for, with no depreciation and no deductible, he says.

To be covered, your car can’t be used for day-to-day transportation. That makes it cheaper to insure than the vehicle you use for your daily commute because it’s not on the road every day, and it’s kept stored away, Klinger says.

Classic car owners are a “very low-risk group,” and because they’re passionate about their vehicles, they want to protect them and prevent them from deteriorating, he says.