Published on: Dec 16, 2019
Editorial Integrity - Why you should trust us?
Our mission is to help you make educated insurance decisions with confidence. We have an advertising relationship with some of the offers included on this page. However, this doesn’t influence our editorial judgment or recommendations. The rankings and listings of our reviews, tools and all other content are based on objective analysis, and we fully own our opinions.

Written by:
Managing Editor
Les Masterson has more than 20 years of experience in journalism, editing and content creation. In his career, he has covered everything from health insurance to presidential politics.
Read Full Bio >>
twitter

The holiday season is a time for family, shopping and fighting for mall parking spaces. Parking places often play a vital role in shoppers’ convenience and stress levels.

With that in mind, CarInsurance.com asked 500 drivers about parking, including their prime spots, how they find them and how important parking is to shopping decisions. 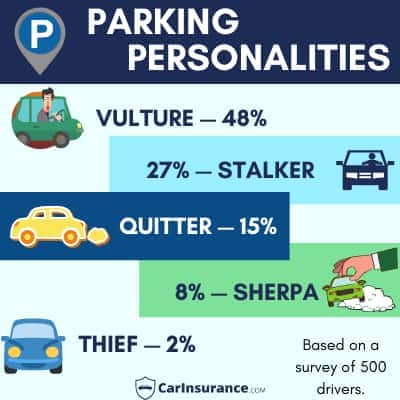 We found that the type of parking is important to many shoppers. One-quarter of respondents said they’d shop at a store with higher prices if they had more parking. That includes nearly one-third of men. Women are less apt to give up deals for parking.

There are few better things in life than getting the right parking spot when you’re Christmas shopping. The last thing you want is to circle parking lots and fight with other drivers.

Most of us have our ideal parking spot. But how do people find that desirable spot?

We found nearly half circle the lot, while more than one-quarter follow behind other shoppers.

We found that women are more likely to be a “vulture” than men, while men are slightly more likely to leave a parking lot if there aren’t enough spaces.

Finding a great spot goes beyond the location. It often matters what’s parked next to you. So, if you find a huge truck hugging the line, do you keep driving or squeeze in and hope for the best?

We found that huge trucks are the type of vehicle that drivers try to avoid when parking.

Thirty-four percent of respondents said no neighboring vehicle type will stop them from taking a parking spot.

So, you’ve found your spot. You’re comfortable with the cars on either side of you. How do you park? Are you a perfectionist? Do you not care if you’re on a line? Do you even take up two spots?

We found most merely try to get in between the lines. 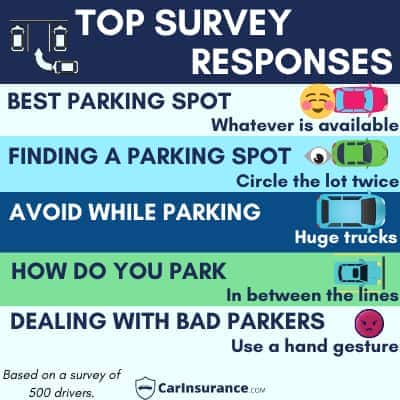 So, you found your spot, you entered the mall and crossed off a chunk of your list. You head to your car and there’s someone following behind for your space. How do you handle it? Do you pick up the pace? Do you go slower and let the other driver stew?

We found nearly half (49%) go about their business as usual. Thirty-five percent hurry up, while 16% take their time. Forty-two percent of women said they hurry up when someone is waiting. That’s compared to only 28% of men. Men are more apt to take their time than women (20% of men compared to 12% of women).

Dealing with Other Parkers

Our survey asked about respondents’ parking, but we also wanted to know what they thought about other drivers.

Fifty percent of drivers surveyed said that as many as half of motorists are lousy parkers. Another quarter said as much as 75% of drivers stink at parking.

Most respondents criticize bad parkers, but they often don’t leave notes on cars relaying their displeasure. Only 15% said they’ve left a note on a car, though 40% said they wish they had the nerve to leave a note.

Men were more likely to leave a note. Twenty percent of men said they left a note compared to 10% of women.

Leaving a note is a passive-aggressive way to confront another driver. We found that many drivers have used other methods — including a middle finger — to voice their displeasure.

A parking lot is often a spot for accidents, especially during the hectic holiday shopping.

We found that one-quarter of respondents said they were involved in a parking lot car crash. Sixty percent of the accidents involved another driver hitting a car, while 41% said they’ve hit another car. Fourteen percent acknowledged hitting a pole, 3% struck a cart and building and 2% hit a pedestrian.

Penny Gusner, CarInsurance.com senior consumer analyst, offers this advice on the role insurance plays if you have to file a claim for a parking lot incident.

How to file a claim if:

Les Masterson has more than 20 years of experience in journalism, editing and content creation. In his career, he has covered everything from health insurance to presidential politics.