How does auto insurance work for multi-car pileups?

When it comes to multi-car pileups, auto insurance can be a tricky thing to navigate. Understanding who is liable and the policies of different insurance companies is key in making sure all parties involved are covered properly. Having collision coverage comes as an advantage, as it covers for your car's damages irrespective of who is at-fault.

Prachi Singh
Contributing Writer
Prachi is an insurance writer with a master’s degree in business administration. Through her writing, she hopes to help readers make smart and informed decisions about their finances. She loves to travel and write poetry.
Read Full Bio >>
linkedin twitter
| Updated on: Jan 23, 2023

Executive Editor
Laura is an award-winning editor with experience in content and communications covering auto insurance and personal finance. She has written for several media outlets, including the USA Today Network. She most recently worked in the public sector for the Nevada Department of Transportation.
Read Full Bio >>
linkedin twitter
Editorial Integrity - Why you should trust us?
Our mission is to help you make educated insurance decisions with confidence. We have an advertising relationship with some of the offers included on this page. However, this doesn’t influence our editorial judgment or recommendations. The rankings and listings of our reviews, tools and all other content are based on objective analysis, and we fully own our opinions. 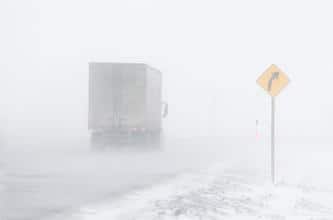 While massive pileups don’t happen frequently, clearing the roads can take hours, investigations can take weeks, insurance claims checks may not arrive for months, and lawsuits can drag on for years.

A truly massive pileup can stretch for miles and involve hundreds of vehicles.

Tragically, on Feb. 11 a chain-reaction crash occurred on an icy Interstate 35W in Fort Worth, Texas, resulting in a massive pileup. At least 133 vehicles were involved in the incident, with six deaths and many other motorists injured, according to news reports.

A few examples from past years:

With so many moving vehicles, blame is difficult to pin down. And even if the blame is obvious, who’s got enough liability insurance to pay for dozens of totaled cars? (See a map of minimum state car insurance requirements.) That’s why it’s always wise to buy full coverage car insurance, which includes collision coverage.

How they happen and who’s to blame

Drunk drivers, red-light runners and speeders often cause smaller pileups by starting a chain reaction when they plow into a car in front of them. Assessing blame in these types of accidents is usually pretty straightforward, experts say. Almost always, you are responsible for the damage to the car immediately in front of you because you were following too closely.

In the case of really big pileups, the weather is usually a contributing factor.

Even if the police cannot pinpoint the exact cause of a pileup, drivers may still end up with a ticket. Lt. Chris Miller of the Florida Highway Patrol and sub-district commander of the Lakeland District, who investigated a 47-car crash on Interstate 75 in October 2012, says that while the weather is often a contributing factor, the driver is responsible for adjusting his speed and the gap between the cars. Nineteen drivers were cited in that October crash.

Colerain Township, Ohio, traffic investigation specialist Mark Meyers issued a report on the Ohio crash, hundreds of pages long and weeks in the making — but wrote “fault cannot be placed.”

This is not uncommon in major pileups. Rick Ward, director of auto claims at MetLife, says “most major pileups end up being a series of small accidents. Unless there is an extremely egregious action such as drunk driving, pinpointing fault can be very difficult.”

Insurers, hoping to avoid big payouts, conduct their own investigations. Ward confirms that insurers put investigators in the field who review the police report, interview witnesses and examine the physical evidence to decide what to do about each individual claim.

Let the insurers sort it out

When it comes to pileups, in most cases, you are on your own.

The truth is that no one carries enough coverage to pay for the damage caused by a massive pileup. If one person is responsible for the entire accident, their liability coverage would quickly be used up.

This is when your collision coverage will earn its keep. Collision insurance covers damage to your vehicle if you are involved in a wreck and you are at fault, the other driver lacks insurance or is underinsured, or if there is no way to determine fault.

Don Johnson, past Property and Catastrophe claim Associate Vice President with American Family Insurance warns that pile-up claims can take months to settle because the fault is often shared by more than one party. Evaluating comparative fault prolongs the settlement process. If significant injuries occur, the process can become even more involved as insurers seek to sort out their exposure and recovery options.

The quickest way to get your car fixed, Ward says, is to make a claim on your own collision coverage. “Your insurer will pay your claim and then fight it out with other insurers if it feels you were not at fault,” he says.

You will have to pay your collision deductible, but you might get that back if your insurance company can claim successfully against another driver.

Why you should file a claim quickly

So, what happens if you don’t carry collision coverage? Getting your car repaired is going to be a lot more complicated.

If you know which car hit you, you can make a claim against that driver’s liability coverage. Ward advises gathering as much information about the driver and his or her insurance company at the accident scene, filing a claim as soon as possible and then crossing your fingers.

A quick claim is also important if the blame falls on a single driver as even a small pileup will exhaust a driver’s liability coverage.

Getting your claim in first will put you at the top of the payout list. If you wait too long or the responsible driver carries low coverage levels, you will have to repair your own vehicle or pursue damages in court.

— Mark Vallet contributed to this story.

Prachi Singh
Contributing Writer
Prachi is an insurance writer with a master’s degree in business administration. Through her writing, she hopes to help readers make smart and informed decisions about their finances. She loves to travel and write poetry.