Car insurance fraud: how and why crooks get caught

Susan Ladika | Updated on: Jun 12, 2012
Editorial Integrity - Why you should trust us?
Our mission is to help you make educated insurance decisions with confidence. We have an advertising relationship with some of the offers included on this page. However, this doesn’t influence our editorial judgment or recommendations. The rankings and listings of our reviews, tools and all other content are based on objective analysis, and we fully own our opinions. 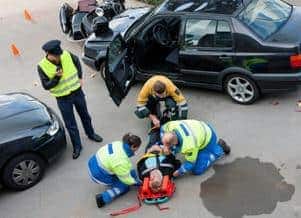 Auto insurance fraud comes in all shapes and sizes, from organized rings that stage accidents and reap big bucks to repair shops that routinely help motorists inflate their claims.

Spotting those cases among the 10 million or so car accidents reported each year takes some detective work.

According to the Insurance Information Institute, there were more than 35,000 suspicious auto insurance claims in 2011, and 42 states and the District of Columbia have set up bureaus to investigate suspected fraud.

While it’s impossible to put an exact dollar value on the amount of auto insurance fraud that occurs each year, a study by the Insurance Research Council estimates that fraudulent and exaggerated claims cost insurers an extra $4.8 billion to $6.8 billion in 2007, or between 13 percent and 18 percent of total payouts. Inflated claims are more common than out-and-out fakes, the report states.

Those who get caught trip over red flags investigators have learned to watch for.

How fraud is investigated

Auto insurance companies may delve into cases of suspected fraud themselves, but when a case involving a sizeable claim or a number of claims appears to be fraudulent, insurers may call in the National Insurance Crime Bureau (NICB) to investigate.

The NICB “takes the thread and starts pulling on it,” says NICB spokesperson Frank Scafidi. “We can perhaps see similar acts by the same people in the same town.”

Like the NICB, the private company Detica works with auto insurance companies to detect patterns of fraud. “Insurers pool data, which helps everyone,” says Joe Friscia, Detica’s president for the Americas.

Consider the “swoop and squat,” where two drivers work in tandem to trap an innocent motorist. One slams on the brakes in front of the victim; the other blocks the victim in the other lane, so the victim can’t swerve to avoid the wreck.

Instead, the victim rear-ends the car in front, which is filled with people. Everyone in that car will claim a hard-to-detect injury, like whiplash. The same people may be repeatedly involved in such wrecks.

“We detect them by looking at the relationships of people and see if there are other accidents in their history,” says Tim Rush, senior manager for sales for the U.S. insurance sector for Detica.

Using its software, Detica can look at things like the street addresses, phone numbers and email addresses for the suspected fraudsters, Rush says. Large, organized fraud rings could involve 20 or 30 people, Rush says.

NICB investigators work with member insurance companies to uncover fraud rings. The organization has about 120 agents in the field investigating claims, Scafidi says. Another arm analyzes claims, looking for suspicious trends that can trigger investigations.

Investigators may notice things such as the same address, witness names or license plate numbers showing up repeatedly on claims.

Red flags go up if the organizer “has purchased 20 different policies for 20 different, unrelated individuals, and they think it won’t be detected,” Rush says.

Investigators also keep an eye out for less obvious fraud, such as a claim for $3,000 after a vehicle is towed, when the real cost is $500, Rush says. Another example might be a medical provider saying someone’s arm is broken when it’s actually bruised.

Such “soft fraud” is particularly commonplace. “Soft fraud is pretty constant. It’s almost like a fact of life in the business,” Scafidi says.

Insurers can opt to pay the claim and then cancel the motorist’s policy, or they may decide to build a case and prosecute the person for fraud.

The industry says fraud is a particular problem in no-fault auto insurance states, where policyholders can receive financial compensation for their losses in an auto accident — up to a set amount — regardless of who is at fault.

Scafidi says no-fault laws provide a temptation because “there’s a guaranteed payout without too much trouble.”

A dozen states, including Florida, New York and Michigan, have no-fault systems in place, and often motorists pay the price through hefty car insurance rates.

In Florida, where fraud has pushed personal injury protection rates through the roof in some ZIP codes, the Legislature this spring approved reforms that put time limits on treatment for accident injuries and exclude care provided by massage therapists or acupuncturists.

Scafidi says he’d “like to see the same kind of results in other states, but it’s a slow process.”