Updated on: Feb 18, 2021
Editorial Integrity - Why you should trust us?
Our mission is to help you make educated insurance decisions with confidence. We have an advertising relationship with some of the offers included on this page. However, this doesn’t influence our editorial judgment or recommendations. The rankings and listings of our reviews, tools and all other content are based on objective analysis, and we fully own our opinions.

Why tire tread depth is important

Managing Editor
Ashlee is a dynamic business writer with a special focus on finance. With an MBA and more than twelve years in the finance industry, Ashlee brings a practical and relatable perspective to the area of business writing. She is passionate about personal finance and empowering others with the knowledge to succeed. When she isn’t writing, Ashlee manages a team of supply chain professionals at a university and enjoys spending free time with her partner and dog on their farm in Kentucky.
Read Full Bio >>
twitter 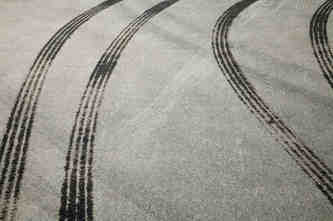 When snow hits Dixie, people up North tend to get a little mean.

The comments on social media and memes circulated are never the place to look for sympathy, but the remarks can be pretty insensitive:

Even these wisecrackers will agree there is nothing funny about storms responsible for dozens of traffic deaths and widespread power outages that trigger states of emergency across the South.

The insurance bills resulting from the avalanche of claims won’t be a riot, either. Thankfully, car insurance does cover common wintry weather incidents. But you’ll pay for it. Car insurance rates increase about 31% after filing an accident claim, according to a CarInsurance.com analysis of rates.

But in Northerners’ defense, motorists in Southern states are often stranded by or have accidents in what appears to be little more than a few inches of snow. Why? It really all comes down to driving in the snow without snow tires.

“You can take a car with an awesome four-wheel-drive system and put a tire that’s a high performance summer tire and you could render it almost useless in the snow because the tires have got no grip,” says Matt Mullins, chief instructor at the BMW Performance Driving School in South Carolina. “On the other hand, you could take your regular old car and put an awesome set of snow tires on and you’d be amazed where you could go.”

“I think up North people know this,” he says.

No matter where you live, you need to check your tire treads frequently to ensure your safety when behind the wheel.

Why is tire tread depth important?

Tire treads are important to monitor because it plays a critical role in driving safety and performance, as well as in fuel efficiency. Tire treads allow the tire to grip the road, handle acceleration and breaking. As the tread wears down, your tires become less able to do their job, which could increase your chance of an accident, especially in wet or snowy conditions. That’s why checking your tire tread depth should be part of routine vehicle maintenance.

How much tread is safe on a tire?

The minimum safe tire tread depth is 2/32, but you should replace your tires at the 4/32, especially if you drive in rainy and snowy conditions.

Most states require tires only to have at least 2/32 inch of tread depth. This is fine on dry roads and somewhat dicey on wet ones. Drivers cope; you don’t see cars abandoned if a half-inch of rain falls.

But in snow, any tread below 4/32 inch is considered useless. The car may only come to a stop with the help of another object in its path.

A new all-season tire has at least 10/32 inch of tread. But even it won’t grip like a winter tire.

How to tell if you need new tires

It is true that you can use a penny to determine when you need to replace your tires. Here is how, according to the Firestone auto care website:

Learn more about Accidents and claims

Regardless of where you live and how adept you are at driving in the snow, no one can drive on ice.

It rarely snows down South, and when it does, it usually doesn’t last long.

Therein lies a related phenomenon. Snow begins to melt, then ices over, creating slick roads that are near impossible for even experienced Yankees to navigate.

In a survey of 500 drivers last year, CarInsurance.com found that people hate ice more than snow.

Still, snow does cause concern for drivers, but how much snow is too much to drive? We found that one-fifth of motorists won’t operate a vehicle if there are up to three inches of snow expected. Another 26% won’t drive if there are four to six inches of white stuff forecast.