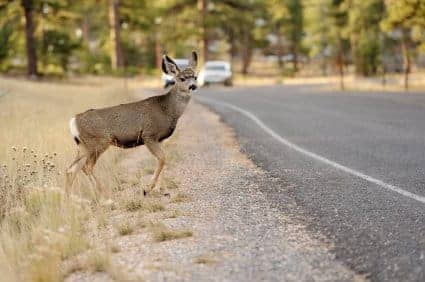 These are the most common questions from readers about deer-vehicle collisions and their car insurance policies.

I hit a deer. Am I covered?

You might think a deer strike would be covered by collision, since this coverage normally covers when your car has an impact with another vehicle or object. However, contact with animals (wild or domestic) is specifically listed as a loss covered by “other than collision,” which means comprehensive coverage.

If you have only liability coverage, then your insurer won’t pay for damages from hitting a deer. Liability insurance covers the damage you do to others and not your own vehicle.

I swerved to miss a deer. Am I covered?

When you hit a deer, your claim is filed under comprehensive insurance. But if you swerve to miss a deer and crash, it is a collision claim.

Although a deer may have started the chain of events that led you to crash the car, if your vehicle didn’t actually have contact with the animal, it isn’t a comprehensive claim. If you collide with another car or an object (such as a guardrail or tree) or roll your vehicle, the claim for your damages falls under your collision coverage.

Will the state pay for the damage, or for my deductible?

No. No states will pay for repairs to your vehicle, or even your deductible, if you hit a deer. Yes, your state may have an agency to manage the deer population, but it’s not as if they can prevent deer from running into the roadway, especially during mating and migration season.

Do I need to file a police report?

In general, car insurance companies don’t require you to fill out a police report to file a comprehensive claim for hitting a deer, but it’s advisable to contact authorities anyway.

Having a police report to back up your claim will help you be able file this claim under your comprehensive coverage. If the claims adjuster can’t validate your claim that you hit a deer, the claim may end up under your collision coverage instead.

Even if your insurance provider doesn’t require a police report, your state may require a police or crash report for accidents where there is any injury, or property damage above a certain amount.

Will my insurance go up?

Comprehensive claims, such as one for hitting a deer, don’t typically increase your car insurance rates. However, with many companies, if you file a certain number of claims within a specified period, your rates can go up. So, if you already have had a few auto insurance claims in the past few years with your car insurance company, then this one could push your premiums higher due to the total amount of claims you’ve made.

What are the odds of hitting a deer?

It depends on where you live. According to a State Farm study on the odds of hitting a deer, by state, your odds are 1 in 116 in the United States.

West Virginia led all states in anima collisions per capita, with the odds being one in 37. The average car insurance claim for deer strikes increased by $162, State Farm claims data show. The national cost per claim average for animal strikes was $4,341, up from $4,179 (2016-17), according to State Farm.

Penny has been working in the car insurance business for more than 10 years and has become an expert on procedures, rates, policies and claims. She has seen it all, and working with CarInsurance.com from its inception, she researches the routine and the bizarre with equal enthusiasm. She has three very active children and a husband with a zeal for quirky cars.