Updated on: Apr 12, 2013
Editorial Integrity - Why you should trust us?
Our mission is to help you make educated insurance decisions with confidence. We have an advertising relationship with some of the offers included on this page. However, this doesn’t influence our editorial judgment or recommendations. The rankings and listings of our reviews, tools and all other content are based on objective analysis, and we fully own our opinions.

Wrecked! And then slammed by fees 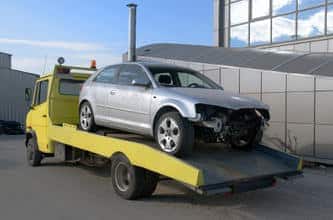 Before you even get to the hassle of repairs after a collision, you have to deal with towing and storage fees.

If you’re not careful, they can add up to a small fortune.

The issue comes up repeatedly with clients who have been in serious accidents, says personal injury attorney S. David Rosenthal of Rosenthal Law in Roseville, Calif. Often delays occur in working with the other driver’s insurer, even when you’re certain the other guy caused the wreck.

“It can take 10 days to two weeks to get a police report, or sometimes there can be a dispute over who was at fault for the accident,” Rosenthal says.

Meanwhile, the car sits there in a lot, accruing storage fees. Typically those are about $50 a day in California, he says. Even if the other driver’s insurer eventually takes responsibility for the car’s repair, the carrier might refuse to pay the whole storage tab.

“The insurer will say, ‘You should have gotten the car out of there and mitigated the damages,'” Rosenthal says.

He’s seen cases where the towing and storage bill totaled $1,500.

Even worse, if a car sits too long on a storage lot, the towing and storage company can sell it at auction, as long as the company abides by laws and gives proper notice to the owner.

Why the storage sticker shock?

Storage fees can spiral for a couple of reasons. Sometimes it’s a matter of the fees simply adding up when a car sits on a towing company’s storage lot for a long time.

But occasionally the high cost is due to price gouging and deceptive practices by rogue tow companies. Insurers are quick to note that most tow operators are honest business people who provide a critical service. But a few scoundrels drive up costs by charging outrageous fees or making it difficult for people to retrieve their cars, they say.

In an August 2012 report, the Property Casualty Insurers Association of America (PCI) estimated that abusive towing and storage practices cost consumers and insurers $570 million a year.

The average crash-related towing and storage fee in 2010 was $412 per car insurance claim — $228 for towing and $184 for storage, the report says. PCI says the average should be closer to about $150 a vehicle, according to what is the “usual and customary” tow and storage fee per vehicle after an accident.

“We don’t want to paint the towing industry with a broad brush. The vast majority of tow operators are honest,” says Bob Passmore, PCI’s senior director of personal lines.

But problems with the relatively few bad operators are an ongoing issue.

“I’ve been in the insurance business for 28 years, and there have been problems like this ever since I started,” he says.

Consumer groups and insurers have lobbied states and cities to pass laws to prevent abusive practices. But a federal provision pre-empts states and local governments from regulating rates, except for non-consensual tows. Those include tows for illegally parked or abandoned cars. Vehicles taken from accident scenes are generally considered consensual tows. Consumer protections are better in some places than others.

“Towing regulation is generally a patchwork of state and local laws,” Passmore says.

Don’t get taken for a ride

So how do you avoid ending up on the hook for huge towing and storage costs?

Second, call your insurance carrier right away after an accident. In some cities, the police will assign a tow truck to take your car if you can’t drive it. If not, ask your insurer which tow company to call, or let the insurer place the call, says Frank Scafidi, spokesman for the National Insurance Crime Bureau.

Even if you think the other guy was at fault and his insurance should pay for the accident, get in touch with your insurer immediately. Your collision insurance will pay the towing, storage and repair costs, minus the deductible. An adjuster from your insurer will get your car moved as quickly as possible to a repair shop. Once the accident has been investigated and fault determined, your carrier then can go after the other driver’s insurer to pay the tab and reimburse you for the collision deductible.

If you don’t have collision coverage, Rosenthal recommends that you take the initiative to get your car out of storage as quickly as possible to minimize costs while you work with the other driver’s insurer. (See “Car accidents: What you need to know.”)