Updated on: Jan 25, 2023
Editorial Integrity - Why you should trust us?
Our mission is to help you make educated insurance decisions with confidence. We have an advertising relationship with some of the offers included on this page. However, this doesn’t influence our editorial judgment or recommendations. The rankings and listings of our reviews, tools and all other content are based on objective analysis, and we fully own our opinions.

How do you know when to total a car from flood damage?

Written by:
Our Carinsurance.com team is made up of regular people with insurance policy needs, just like you. We just happen to know a little more about insurance than the average bear.
twitter 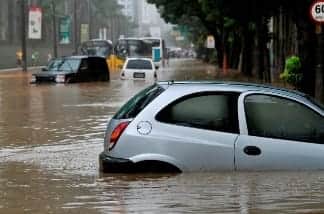 State laws and your insurance company’s guidelines dictate how a vehicle is determined to be a total loss. You must have comprehensive insurance coverage for your car to be repaired or replaced after flood damage. You will owe your chosen deductible.

A car is determined to be a total loss when:

Typically, cars are “totaled” when the cost of repairs to fix the vehicle is higher than the vehicle’s actual cash value (ACV). However, in some cases, it’s not practical to fix a car, even if the cost to do so is less than the ACV. In that case, insurance company guidelines and state laws come into play when determining whether the car is totaled.

Insurance companies calculate the “total loss ratio” or “damage ratio” (cost of repairs divided by the actual cash value) when determining whether a car is totaled. This ratio is then compared to limits set by the company itself or by state law.

Some states dictate how high this damage ratio needs to be to declare a car totaled. This is referred to as the Total Loss Threshold (TLT). To total a car, the total loss ratio must exceed the established TLT percentage. For example, a car with damage totaling 75% of its value is totaled in New York state but considered repairable in Texas, which has a threshold of 100%

If the TLT is not dictated by the state, your insurance company will generally use another formula, known as the Total Loss Formula (TLF) which is: Cost of Repair + Salvage Value > Actual Cash Value. If the sum of the repair cost and the salvage value is greater than the ACV, the car can be declared a total loss.

These states have the following TLT threshold mandated by law:

In some cases, your car insurance may pay for damages when your car sustains water damage and isn’t totaled. Here’s how different types of car insurance coverage come into play if you’re caught in a flood:

Comprehensive insurance: If your vehicle sustains water or flood damage, you can file a claim under your comprehensive insurance coverage. That covers any type of damage to your car up to its actual cash value, which is caused by natural disasters instead of accidents.

Collision coverage: Collision comes into play if you hydroplane and flip your car or hit another car or a tree. Your claim will pay to repair your car or will pay the actual cash value of the car. You still have to pay the deductible, whether the accident was your fault, someone else’s or caused by the storm.

— Michelle Megna contributed to this story.