How to make a diminished value claim

A car’s value goes down after an accident, even after it’s repaired. A diminished value claim can help you to recover some of that loss in value. But is it worth the effort? 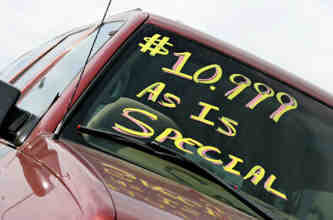 The point of car insurance is to make you whole again after an accident.

But no matter how expertly repaired, a car with an accident history will likely be worth less than one without — even if the car looks as good as new and runs better than it ever has.

What is diminished value?

Think of diminished value as the difference between the fair market value of the vehicle before the accident and after the accident.

A car that has never been in a crash may be worth $15,000 but that same car with an accident history will typically be worth significantly less. There’s a way to make up the difference: a diminished value claim.

Diminished value insurance claims allow car owners to recover some of the difference between a car’s pre-accident value and its value after repairs.

There are three general types of diminished value:

How to file a diminished value claim

If you’re in an accident where the other driver is at fault, before you’d file a diminished value claim, you would file a claim with the driver’s insurance company to cover the repairs to your car.

Then, if the accident drove down your car’s value, you could file a diminished value insurance claim with the at-fault driver’s insurer.

Here are the steps to filing a diminished value insurance claim, at a glance:

An appraisal is the first step to a successful claim once you’ve contacted the insurer, even if you don’t plan to sell the car, Hixenbaugh says. The diminished value is based on how much less money the car would be worth if you were to sell it.

That loss in value can come because repairs did not restore the car adequately — mismatched paint, for example — or simply because the car’s history is now tainted. About 70% of used cars are sold to dealers, Hixenbaugh says, who will look up the history of a car to see if it has been in an accident. So, too, will many private buyers.

“No one is going to offer you more money because your car was in a major accident,” Penny Gusner, CarInsurance.com’s senior consumer analyst says.

You can get a pre-accident private party value from online resources such as Edmunds.com or Kelley Blue Book. Then you must document what your car is worth after the repairs have been done.

Shane Fisher, attorney in Winter Park, Florida, recommends getting a trade-in value letter from a car dealer stating that the lower value is due to previous damage done to the car, even though it has been repaired.

It is also important to note that if you are the at-fault driver, your insurance company is unlikely to pay you out your diminished value claim.

Insurance companies use a formula called “17c” to figure out the monetary value of your car after a crash. Critics call it arbitrary and claim it undervalues cars.

You’ll benefit more from a higher diminished value, so it’s wise to know how the insurer will arrive at its number, and how that compares to your own calculation of the value of the car if you were to sell it after a collision. If there’s a big gap between the numbers, you may be able to negotiate a better deal.

Step 1: Look up the market value of your car at the NADA or Kelley Blue Book websites. You need the mileage, make, model and details about the damage to do this.

Step 2: Apply a 10% cap to the value by multiplying the market value by .10. There is no documentation for why insurers apply this limit, which is why the 17c formula is controversial. At any rate, it sets the maximum amount your insurer will pay for your diminished value claim.

Step 3: Multiply for damage. This does not take into account mechanical damage, just structural damage, which is another reason critics dislike the formula. Take the number you arrived at in step two ($1,500), and multiply it by the following number that best describes the damage to your car:

Step 4: Deduct more of the value by applying mileage to the formula to get to the final 17c value.

Of course, mileage is already taken into account in the market value of your car, but insurers still handicap the car’s value again with another mileage demerit. Multiply the number you arrived at in step three ($1,500) by the appropriate number from the list below to arrive at the final diminished value of your car using the 17c formula:

If the accident was your fault, don’t expect to be able to claim diminished value against your own collision coverage.

Few states — and few insurance policies — allow it or have made a decision on if it is allowed. The same applies to cars that are flooded but not totaled out; you typically can’t file for diminished value against your own coverage.

If you can claim for diminished value in your state, especially a first-party claim is not easy to determine as most states don’t have an actual law on the matter.

Georgia and North Carolina have had definitive court cases which decided it is allowed. Many other states are still undecided or court cases say it’s not required under first-party claims.

The states below have court cases with favorable results for those seeking compensation for diminished value (for first-party claims ) – thus, in these states, you have a higher chance of your claim being at least contemplated.

Even so, “just because state law allows a diminished value claim doesn’t mean insurers are required to pay it,” says Gusner. “Don’t expect the process to be easy.”

Third-party claims are allowed or have had favorable court cases for it in the following states:

For a successful claim, you’ll need an appraisal of the car’s value both before the accident and after the repairs have been done.

“In the majority of cases it’s considered the vehicle owner’s responsibility to prove their loss,” says Richard Hixenbaugh, owner of Collision Claim Associates, a company that charges $300 to $400 to document a loss of value.

Final thoughts: Is a diminished value claim worth it?

Diminished value claims are not always easy. You may have to attempt the claim more than once and depending on what it’s worth to you, you may even have to recruit the help of an attorney.

It’s a negotiation, Hixenbaugh says. Some insurers may maintain that there is no such thing as diminished value, or offer a token amount calculated by an industry formula.

Those unable to find satisfaction on their own or using an appraisal company may have to turn to the courts.

But for most people, the cost of an attorney doesn’t make sense, Fisher says, either because they’re driving older cars that are “rolling total losses” and aren’t worth much, or the claim is so small that it will get lost in legal fees.

A car worth less than $10,000 isn’t worth filing a claim on or hiring a lawyer for, he estimates. Many claims may fall underneath your state’s small claims threshold, allowing you to present your own case.

For an expensive or almost-new car, though, filing a diminished value claim may be worth the effort.