Michelle Megna | Published on: Apr 22, 2019
Editorial Integrity - Why you should trust us?
Our mission is to help you make educated insurance decisions with confidence. We have an advertising relationship with some of the offers included on this page. However, this doesn’t influence our editorial judgment or recommendations. The rankings and listings of our reviews, tools and all other content are based on objective analysis, and we fully own our opinions. 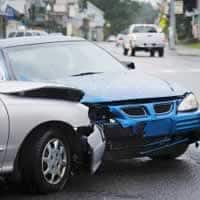 Here we’ll explain the best way to find cheap car insurance even after you’ve had an accident. You’ll also learn how much an accident will raise rates and how long it is until an accident is off your insurance record.

How can I get cheap car insurance after an accident?

The best way to still pay cheap car insurance rates after an accident is to comparison shop. CarInsurance.com’s rate research shows, as outlined below, that the average driver with a recent accident can save thousands of dollars by comparing car insurance quotes. Insurance companies assess risk differently, so after an accident claim, your current carrier may not be the most affordable. That’s why shopping around for the best price should be on your list of what to do after a car accident.

Based on CarInsurance.com’s rate analysis, Geico is the cheapest car insurance  company for drivers with a recent accident claim. Here is how car insurance companies rank on price for those with an accident on their record.

By subtracting the lowest rate from the highest, you can see below how much you can potentially save by comparing rates after an accident, based on CarInsurance.com’s data.

Victoria and Foremost cater to high-risk drivers, so it’s not surprising that rates are among the highest for those companies after an accident claim. If you were to calculate average savings for standard car insurance companies in the chart above, the saving would be as follows:

How much does an accident raise insurance rates?

How much more you pay for coverage after an accident depends on your insurance company’s guidelines and your state laws. Many other factors also come into play, chief among them are the type of car you drive, your age, where you live and your credit history. Having said that, below you’ll see the national average increases for common accidents.

How much insurance goes up after an accident also varies by state. Drivers in Minnesota, California, Louisiana and Michigan get hit with the highest increases for one at-fault accident, while those in New York, Hawaii, South Carolina and Alaska see the lowest, compared to the rest of the country.

You’ll see below how much rates differ among insurers for various accident claims. CarInsurance.com analyzed rates from up to six major insurers, and their subsidiaries, for 10 ZIP codes in each state for a full coverage policy.

How long until an accident is off your insurance record?

How long will I pay the increased rate after an accident?

You typically pay the higher rate for three to five years, says Penny Gusner, CarInsurance.com consumer analyst. “In some cases, the surcharge lessens over time until it’s gone,” she says. “In other cases, it stays the same amount for the duration — it depends on state laws and insurer’s internal guidelines.”

Expert tips for saving on car insurance after other circumstances change

We’ve established that doing a car insurance comparison after an accident can save you money, but Gusner says there are other times you should compare car insurance quotes to get the cheapest car insurance for your particular situation. Your rate may go up, or down, depending on certain life circumstances. These are the other times to shop your policy, since these are life events that tend to impact your rates significantly.