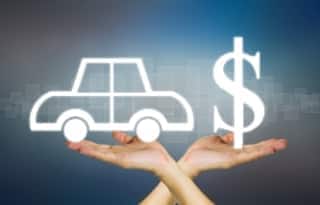 When you pay a fine and plead guilty then typically you are convicted of the speeding offense and it then is placed on your driving record. If you go to court and fight the ticket and are found guilty in court then you are then convicted of the offense. After a loss in court and conviction then the speeding ticket would then be placed on your driving record and count as a moving violation conviction.

If you fight the traffic ticket and are found not guilty or you otherwise get the ticket dismissed then it is not a conviction of a moving violation and does not go on your record. So merely receiving a speeding citation does not yet count as being convicted of a moving violation, speeding offense in your question. You are convicted either in court or by pleading guilty for the offense and paying the fine associated with the citation.

Normally for a speeding ticket, or other traffic violation, to be placed on your driver's history you must have been found guilty of the infraction. Generally if you pay the ticket you are pleading guilty and thus it becomes a conviction and the traffic offense is then listed on your motor vehicle record (MVR).

So if you received a speeding ticket and paid it without going to court than it would appear that you plead guilty and thus were found guilty of speeding and that violation was put on your MVR.

Leave a Comment
Ask a Question
Comments
Tell us your thoughts
Leave a Comment
0 Responses to "Is a speeding ticket considered the same as a conviction?"
Disclaimer: Answers and comments provided are for information purposes. They are not intended to substitute informed professional advice. These responses should not be interpreted as a recommendation to buy or sell any insurance product, or to provide financial or legal advice. Please refer to your insurance policy for specific coverage and exclusion information. Please read our Terms of Service.