Marjorie Musick | Published on: Aug 08, 2014
Editorial Integrity - Why you should trust us?
Our mission is to help you make educated insurance decisions with confidence. We have an advertising relationship with some of the offers included on this page. However, this doesn’t influence our editorial judgment or recommendations. The rankings and listings of our reviews, tools and all other content are based on objective analysis, and we fully own our opinions. 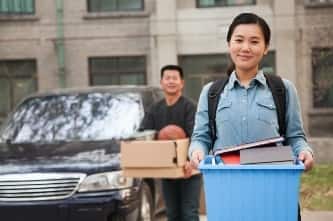 In their song, “Wide Open Spaces,” the Dixie Chicks sing about a Dad yelling, “Check the oil!” as he drops his daughter off at college. This is good advice, although it has nothing to do with car insurance for college students. For some advice you can use, here are seven tips from auto experts for students taking their cars to college:

1. Keep your car in good repair – “Many students have a long ride from their hometown to their college campus so they need to make sure that their vehicle is up-to-date on oil changes and other required maintenance so as to avoid breaking down before they even arrive at college,” says William Van Tassel, manager of driver training programs at AAA National. “Having a back-up plan such as a AAA membership which includes roadside assistance also helps.”

2. Let your insurer know that you’re taking the car to college – Location is one factor used in determining rates, so insurers need to know where the car is used and garaged. If you’re on your parents’ policy and take their car to campus, you need to notify the insurer of the change of address. The same is true if you own the car and have your own coverage. Your rates may go up or down, depending on the location of your school. If you fail to let the car insurance company know about the location change, you run the risk of a denied insurance claim.

3. Know what to do after an accident – After an accident, first check to see if anyone is injured, says Penny Gusner, consumer analyst for Insure.com. “Then exchange information with the other party — including name, phone number and insurance information. Take pictures of the scene and take down notes for yourself, even if you have to use your smartphone. This is important because you may forget details later and it will be more difficult to accurately remember what happened even a day later,” she says.

You should also call the police to get an accident report. If the other person is at fault this is especially important because the driver might admit fault at the scene but say differently later. “If it’s on the police report, it’s harder for the person to change their story,” says Gusner. If the police can’t or won’t respond, see about filing your own report with them after the fact. In some state it’s required that you file a crash report with the state if police don’t respond.

Call your own insurance company and if you think the other driver’s at fault, contact his insurer as well.

Gusner recommends downloading the National Association of Insurance Commissioner’s free smartphone WreckCheck App. It walks drivers through what to do after a car accident and how to collect the right information, and not give away too much personal information.

4. Know what to do if your friend wrecks your car – “Car insurance follows the car and not the driver for most coverages. So, if you lend out your car and your friend wrecks it, it’s your car insurance that will pay out for any liability claims,” says Gusner, “plus you need collision coverage on the car to cover it for the damage it sustained.”If liability limits are exceeded then the driver and the car owner (you or your parents depending upon who the car is titled to) can be held liable and will be on the hook for expenses that exceed coverage limits.

With claims on your policy, your car insurance, or your parents’ if you’re listed on their policy, will likely go up at next renewal.

“I’ve seen such things ruin friendships due to the ‘friend’ not cooperating with the insurance company to get the claim settled or not offering to pay the collision deductible,” says Gusner.

5. Ask about insurance discounts – “Many insurers, including Chubb, offer ‘away at school’ discounts, which are available when students are attending a college more than 100 miles away from home,” says Ray Crisci, senior vice president and worldwide automobile manager for Chubb Personal Insurance. “We advise parents and new college students to check with their insurance agent to see what types of discounts may be available to them,” says Crisci.

6. Be prepared to pay a fee for parking – “Although we always try to accommodate all students requests for parking spots, parking is a limited resource on most college campuses,” says Josh Cantor, director of parking and transportation at George Mason University in Fairfax, Va. “Most universities have to charge a fee in the first place to cover their expenses.” Follow the parking signs to avoid tickets. Most colleges will fine you, and some may even tow your car if you break the parking rules.

7. New student? You might not be allowed to park on campus at all – “Many schools limit who is allowed to park on campus due to limited parking space,” said Cantor. “I would advise new students to check with their admissions office about any guidelines for incoming students related to parking before they make plans to bring their cars to campus and also ask about transportation options such as buses and bike programs. Most colleges want to give students many ways to get around without having to drive.”