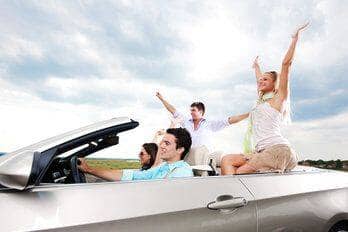 New York is the safest state for teen drivers this year. The Empire State easily beat New Jersey, Maine, and Rhode Island to take the top spot in CarInsurance.com’s survey that gauges the least and most dangerous states for teen drivers.

New York is the third different state to take the top spot in CarInsurance.com’s teen driver study. Massachusetts and Maryland came in first in previous years.

On the other end, Louisiana edged out Montana as the most dangerous state for teen drivers. The latest result is the first time that a state other than Montana ranked last for teen drivers in our study. Louisiana ranked in the bottom 10 in the two previous studies.

The Pelican State didn’t come in last in any one category this year but performed poorly across each metric.

Since doing the first teen driver study in 2016, we’ve seen many state results fluctuate. For instance, states in the top 10 this year, including Rhode Island, Delaware, and Colorado, skyrocketed from the last study.

We’ve also found consistency with some states, Maryland and Massachusetts are always in the top 10. Other states like Wyoming and Alabama are consistently in the bottom 10.

Here’s how each state has finished for each of our three teen driver studies.

Most and least safe states for teen drivers

We gave each state a weighted score to determine rankings, with the safest states topping the list and the states with the lowest scores at the bottom.

"For the most part, GDL is the most effective countermeasure we have seen that contributed to the decline in teen driver fatalities," said Kara Macek, senior director of communications and programs at the Governors Highway Safety Association (GHSA).

Jennifer Ryan, AAA director of state relations, said GDL laws have played a key role in a 57 percent decline in traffic fatalities for 16- and 17-year-old drivers between 1995 and 2010.

Ryan said teens have a higher probability of being in crashes. When a teen driver is on the road, everyone -- from other drivers to pedestrians -- are at a greater risk.

“In fact, new research from the AAA Foundation for Traffic Safety found that when a teen driver has only teen passengers in their vehicle, the fatality rate for all people involved in a crash increased 51 percent. It’s imperative that teens be exposed to continuing education about safety behind the wheel so they avoid the reckless behaviors that can prove fatal for everyone on the road,” Ryan said.

Slightly more than one-quarter (27 percent) of New York high schoolers admitted to texting or emailing while driving. That was the lowest percentage in the nation.

Maryland, which ranked first last time, finished sixth this year. Maryland has the second lowest texting or emailing while driving percentage for high schoolers (28 percent). It also has a low teen driver fatality rate. However, the state’s GDL laws lagged behind others.

On the flip side, Louisiana has higher than average teen driver fatality rates and lacking GDL laws. The state has the second highest percentage of high schoolers who admitted to drinking while driving (10 percent).

Drunken driving leads to more accidents, and it's a problem among teens even though they’re not at the legal drinking age yet.

GHSA estimates that 10 percent of young teens and 20 percent of older teens involved in fatal crashes had blood alcohol levels of .01 percent or higher. This is especially a problem for males. GHSA said male teens were twice as lightly to have a blood alcohol level of .08 percent than teen females. Teen males are also less likely to wear a seatbelt.

Louisiana also had higher than average high schoolers who acknowledged that they’ve texted or emailed while driving (43 percent).

One positive is that Montana has below average car insurance costs for teens. The average teen auto coverage costs are more than $4,000 less in Montana than Louisiana.

Teen driver fatalities have dropped over the past decade. However, The National Highway Traffic Safety Administration (NHTSA) said they’re still “significantly over represented in fatal crashes.” The NHTSA added that young drivers are twice as likely to get into a fatal accident than adult drivers.

Here are the places with the lowest teen driver fatalities by 100,000 people:

Not surprisingly, all six finished in the top 10 this year.

Other states didn’t perform as well. Here are the states with the highest teen driver fatalities by 100,000 people:

GDL laws and their effect on teen driver safety

GDL laws are in place to lessen a teen’s risk behind the wheel. These laws include restricting who drives in a teen’s vehicle, when they can operate a car, and forbidding acts that might distract them, such as texting.

In its 16th Annual Roadmap of State Highway Safety Laws published in 2019, Advocates for Highway and Auto Safety gauged each state’s GDL laws. The report found the following states have the best GDL laws:

The states with the most lacking laws include:

The NHTSA and the GHSA agree that GDL laws are crucial to reducing fatal accidents for teens.

One issue that GHSA has found is that GDL laws usually stop at the age of 18, which means older teens have fewer driving restrictions. This could be a factor in the higher percentage of fatal crashes for older teens.

Macek said many teens wait to get their licenses at 18 or 19, which means they don't have to comply with GDL restrictions -- though they're new drivers. She added that one in three teens isn’t licensed by the age of 18. That means when they get their license, they often don’t have to go through the GDL process or receive the driver safety education necessary.

"For teens that were licensed at 16 or 17, by the time they're 18 or 19, they've gotten comfortable driving, forgotten some of the training, and are likely to start taking more risks -- even though they're still fairly inexperienced drivers,” said Macek.

As a way to combat this issue, Macek said the GHSA suggests that all states increase GDL laws for drivers until the age of 21. Only New Jersey has that kind of restriction.

"Expanding GDL would ensure that the vast majority of people getting a driver's license for the first time have received adequate training and education on safe driving," she said.

Car insurance rates vary greatly by state. The average price for teens can be more than $10,000, depending on where you live.

Here are the five most expensive states for auto insurance for teens on average:

Here are the five cheapest states for auto insurance for teens on average:

The younger the driver, the more you’ll pay in car insurance. Auto insurance rates are based on risk. A newer driver is considering riskier. Hence, the higher rates.

Here are the averages for each age group by state:

What you can do to help teen drivers

You may think that you have little control over your teen’s driving unless you’re in the car. That’s not true.

“According to research, teens value the opinions of their parents most of all, even if it doesn’t always seem like it. That’s why sharing your knowledge about safe driving is so important. When you start talking to your teen about driving, you are beginning a potentially life-saving conversation. It’s really important to set and enforce rules, and model safe and responsible driving to avoid crashes,” Ryan said.

Two ways to influence your teen’s driving are to lead by examples and teach your children about GDL laws.

"NHTSA believes learning safe driving habits can also be derived from observation and parental involvement. A parent being involved in their teen driver's education can have a lasting effect on their driving habits. Establishing rules and providing input into their driving behavior can better prepare them for situations they will encounter on their own. Surveys have shown that teens whose parents impose driving restrictions and set good examples typically engage in less risky driving and are involved in fewer crashes," the NHTSA said.

Parents aren’t always making sure their teens drive safely, according to results of a 2019 CarInsurance.com survey of 1,000 parents of teen drivers. Fourteen percent of parents acknowledged not enforcing GDL laws, the survey found. That’s an increase from five percent in the 2018 survey.

The number one reason why parents don’t always enforce GDL laws is that they’re not aware of them. A whopping 45 percent of parents don’t know about GDL laws. That’s an increase from nearly one-third in 2018.

There are ways you can prepare your teen driver, so he or she is practicing safe driving -- even when you’re not there.

Here are some ways you can help your teen:

Find out more about teen driving

Carinsurance.com has a wealth of information for teen drivers and their parents:

For overall ranking, each state was scored from 1 to 5 (1, poor, 2 fair, 3 good, 4 very good, 5 excellent) on each metric. Metrics were weighted as follows: Insurance cost - 10%; Fatal teen crashes - 30%; Leniency of GDL laws - 20%; Teen drinking and driving - 20%; Teen texting and emailing - 20%. Data shown for individual metrics is ranked by raw number. In cases where a state did not participate in federal surveys, the national average was used.

Leave a Comment
Ask a Question
Comments
Tell us your thoughts
Leave a Comment
1 Responses to "Teen driving safety 2019: Least and most dangerous states"
Disclaimer: Answers and comments provided are for information purposes. They are not intended to substitute informed professional advice. These responses should not be interpreted as a recommendation to buy or sell any insurance product, or to provide financial or legal advice. Please refer to your insurance policy for specific coverage and exclusion information. Please read our Terms of Service.