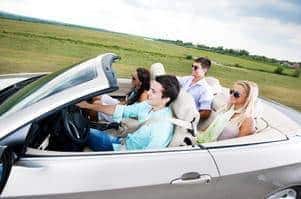 Here's a good reason to buy your teenager that little two-seater -- and remove the passenger seat:

A pair of new studies conducted by Children's Hospital of Philadelphia (CHOP) and State Farm underlines the threat of distraction from passengers as well as electronics, offering insight on how teen boys and teen girls react differently to each.

The researchers discovered that teen drivers carrying peer passengers are much more likely to be distracted before a crash compared to teens driving alone.

The researchers also found a number of common characteristics among teen drivers likely to transport multiple passengers. They all considered themselves thrill-seekers, had a poor understanding of driving risks and said their parents didn't set rules or monitor their whereabouts.

Girls and boys are different

Boys tended to crash due to speeding and reckless driving, possibly egged on by their passengers. Males with passengers were almost six times more likely to perform an illegal maneuver and more than twice as likely to drive aggressively just before a crash when compared to males driving alone.

Girls crashed because of distractions like looking at their friends, using a cellphone or texting.

Females rarely drove aggressively prior to a crash, regardless of whether or not they had passengers in the car, the CHOP study found. However, when it comes to electronic distractions, girls are beating the boys.

In its "Shifting Teen Attitudes: The State of Teen Driving in 2009" report, the Allstate Foundation found that 51 percent of girls reported frequently reading and writing texts and e-mails while driving, compared with 38 percent of boys. When it comes to music, 84 percent of girls are reaching for the dial versus 69 percent for boys.

Close doesn't count for much

Teens know the risks that cellphones present. A 2011 survey by Liberty Mutual and Students Against Destructive Decisions (SADD) found 59 percent of teens believe that texting is a significant distraction, an 11 percent increase from 2009.

Despite the fact that teens are more aware of the dangers of distracted driving, they continue to engage in risky behavior at alarming rates. Fifty-three percent of the high school students surveyed admitted to texting while driving sometimes, and 28 percent claimed they texted often or very often.

One in 10 of these teens is sending more than 50 messages a day while driving.

Texting is not the only distraction to which teens are exposed -- 73 percent are dealing with the radio or a music player, 13 percent are accessing the Internet on their phone and 4 percent admitted to using an iPad or tablet while driving.

All of these electronic distractions are leading not only to crashes, but also to a number of near-misses.

The Liberty Mutual/SADD survey found that 68 percent of the 2,294 responding had narrowly avoided an accident and 56 percent reported multiple near-misses. While the teens tended to blame the weather or other drivers, what was happening just prior to the near misses points to other factors. 21 percent were texting, 20 percent were talking to passengers and 17 percent were changing songs on their music players.

All of these close calls do very little to change the underlying bad driving habits.

In the Liberty Mutual survey, 42 percent of teen drivers involved in a near-miss reported a renewed commitment to safer driving that lasted less than a month, and only 26 percent said that the near-miss caused them to text less while driving.

The only thing that seems to change driving permanently is a collision. Almost 70 percent of teen drivers who have been in a collision say that the experience changed their driving habits "forever."

"Claire" - who asked that her real name not be used - was headed to school in Bergen County, N.J., on a route that she had driven a million times. She was on the phone with a friend when she pulled up behind an SUV in the turning lane at a stoplight. The driver of the SUV inched out to check traffic and stopped. Claire, distracted by her phone call, took off and slammed into the back of the SUV.

No one was hurt, but Claire's vehicle required significant repairs before it could be driven, and her car insurance costs soared.

Claire's accident did lead to a small change in her behavior.

"I can say that I have not once put a phone to my ear while driving, but I talk on a speakerphone frequently and still fiddle with my MP3, and read text messages while driving," she says.

Despite knowing better, she just can't help herself: "I know I shouldn't look at my phone while driving, but even after my accident I just can't seem to break the habit."

All of this may leave parents wondering how they can limit the distractions.

Parents need to be involved

Kelly K. Browning, executive director at Impact Teen Drivers, says "parents need to remember that they are the primary role model for their children. Over 90 percent of the teens we talk to tell us they believe they learned their driving habits from their parents."

Browning recommends that parents make sure their teen follows the graduated driver licensing (GDL) laws of their state. Currently, 45 states and the District of Columbia restrict the number of passengers during the intermediate stage of the GDL program, and 30 states and the district ban all cellphone use.

"Parents need to make sure they understand their state's GDL laws and adhere to them because they work," Browning says.

She encourages parents to use The Centers for Disease Control's (CDC) detailed parent-teen driving contract that includes acceptable driving behavior and the penalties for violations.

While there are dozens of apps on the market that will lock a cellphone while a car is moving, there are no apps that can block additional passengers in the vehicle. . At least, not yet.

Leave a Comment
Ask a Question
Comments
Tell us your thoughts
Leave a Comment
0 Responses to "What's riskier than a teen in a car? Two teens"
Disclaimer: Answers and comments provided are for information purposes. They are not intended to substitute informed professional advice. These responses should not be interpreted as a recommendation to buy or sell any insurance product, or to provide financial or legal advice. Please refer to your insurance policy for specific coverage and exclusion information. Please read our Terms of Service.