Updated on: Jan 17, 2023
Editorial Integrity - Why you should trust us?
Our mission is to help you make educated insurance decisions with confidence. We have an advertising relationship with some of the offers included on this page. However, this doesn’t influence our editorial judgment or recommendations. The rankings and listings of our reviews, tools and all other content are based on objective analysis, and we fully own our opinions.

How to pass your driver’s test

Our experts at Carinsurance.com have listed eight easy steps to follow and pass your driver's license test. You can also improve your chances of passing the test by taking an online practice driver's license quiz.

If you toss and turn in bed during the nights prior to your driver’s test – or if you get the heebie-jeebies on test day – you’re probably not ready to get your license.

In fact, lack of preparation is the No. 1 obstacle to passing your test with flying colors, according to Robert Gillmer, past president of the Driving School Association of America. 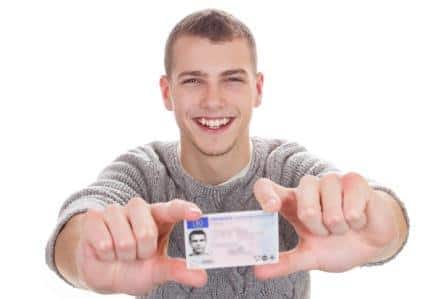 To gain the confidence necessary to successfully pass the driver’s test, you must undertake hours of intensive behind-the-wheel lessons and book study – even if such a regimen sounds daunting, Gillmer says.

“The driver’s test is a piece of cake compared to that,” he says.

Following are eight things you should do to boost your odds of passing the driver’s test.

Every state has an official driver’s manual, Gillmer says. “All of them have pretty good information,” he says.

The manual contains your state’s key driving rules and regulations, such as:

Study the manual carefully. Understanding this information is the key to passing your written test.

Knowing what is in the manual is also crucial to success on the behind-the-wheel portion of the driving test. Drivers who arrive for their test without having studied the driver’s manual exhibit poor driving behavior, Gillmer says.

“They don’t read road signs or markings,” he says. “If they do read it, they don’t automatically know what they should be doing.”

To obtain a copy of your state’s manual, contact your state’s department of motor vehicles, or visit the website. Most states have online versions available.

Take practice driver’s tests available online, which comprise common driver test questions from states across the country. That way, you can see how well you do and what you may need to brush up on.

3. Research and then practice potential test driving routes near your DMV

Driver’s test routes, not surprisingly, are typically fairly close to the department of motor vehicles that oversees your area’s licensing. Therefore, it’s wise to practice driving around the roads within 20 minutes or so of your local DMV.

You can also do a search for local driver test routes on YouTube. The site has videos of routes that drivers have uploaded that you can view to see what to expect.

Gillmer says a lot of newbie drivers fail to log enough hours behind the wheel before test day.

In his home state of Pennsylvania, drivers are required to spend 65 hours of behind-the-wheel learning time before they take the test. Many other states require at least 50 hours.

There are some telltale signs that a driver has not been practicing enough.

“They just don’t have very good judgment of space and time,” Gillmer says. For example, he says drivers without much practice don’t stay in lanes very well.

Endless hours of driving practice might sound tedious, but it’s the best way to learn the rules of the road.

“If people really did their 65 hours the way they are supposed to and they did it with someone knowledgeable about driving, they would not have a problem at all (on test day),” Gillmer says.

Usually, your DMV website will list driving skills that are assessed during your test. For example, the California DMV states that the “test consists of basic actions” such as:

Needless to say, you should be sure to practice the skills outlined on your state DMV website. But passing or failing may depend on how well you hone in on the little details and avoid common mistakes, according to instructor Eva Flores of DriversEd.com.

She says that it is absolutely critical to look over your shoulder for turns, including left turns. She instructs student drivers to SMOG:

Additionally, she says to focus on the following to increase your chances of passing:

During his years as an instructor, Gillmer has noticed a counterproductive tendency among new drivers.

“We have people who call to cancel a driver’s lesson because it looks like it’s going to rain,” he says.

However, such excessive caution prevents drivers from developing skills they will need in real-life road circumstances.

Gillmer urges you to get plenty of practice driving at night and in adverse weather. Such conditions offer a perfect opportunity to hone your skills and boost your confidence.

7. Listen to experts, not your friends

Most new drivers are young, and like the children of the 1960s, they tend to put more stock in their peers’ opinions than in the wisdom of anyone over 30.

“They want to listen their friends,” Gillmer says. “They don’t want professional advice.”

Needless to say, this is a recipe for failure. Young drivers must have the maturity to learn from the wisdom of more experienced drivers.

“All new drivers need to understand the responsibility that comes with a driver’s license,” Gillmer says.

If you are struggling in your attempts to learn, seek out a driving school, Gillmer says. Nothing beats tapping into the wisdom of an expert.

“Driving is not that much of a rocket science,” Gillmer says. “It’s pretty fundamental stuff. But there are rules that need to go with it.”

Many people are a bundle of nerves when they arrive for their driver’s test, Gillmer says. Such high levels of anxiety can undermine your performance behind the wheel.

Calming yourself is crucial to test success. However, this is one area where a driving instructor can’t help you, Gillmer says.

“We can teach them a lot of different things, but we can’t control their anxiety,” he says.

Getting a good night’s sleep before the test can help calm anxieties, Gillmer says. But he acknowledges this might be easier said than done if you don’t feel confident about your driving abilities.

Gillmer says the single best way to reduce anxiety is to build up your confidence in the weeks before test day. That means logging many hours of practice behind the wheel, Gillmer says.

“If they didn’t do the hours the way they are supposed to, they aren’t going to have the confidence,” he says.

— Michelle Megna contributed to this story.