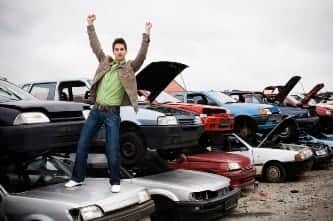 You may save substantial cash if you're buying a car that's been declared a total loss and considered salvage, but then could wind up paying extra for your car insurance.

Some car insurance companies will charge you a higher premium if you buy a salvage title vehicle that has been rebuilt and is now considered roadworthy, says David Suarez, business development manager at Mercury Insurance.

But if the purchase price of that salvage Mercedes or Honda seems irresistible, here's what you should know about insuring the car.

What is a salvage title?

Insurance companies typically will declare a vehicle to be salvage when the cost of the repairs exceeds the car's value. The car could have been totaled in a wreck, damaged by hail or floods, or be stolen and recovered months later.

Depending on the state where you live, a car is usually considered a total loss if the repairs would cost between 50 percent and 90 percent of the vehicle's value.

If an older-model vehicle has been in an accident, it's likely to be totaled out by the insurance company, rather than repaired, simply because of the cost of the labor involved to make the repairs. "Companies do it for economic reasons," Suarez says.

Can I drive a car with a salvage title?

A car with a salvage title cannot be driven.

However, depending on the severity of the damage, some of these cars can be repaired and rebuilt.

Many states will require that you have the vehicle inspected to make sure that it is roadworthy. If the car has been salvaged, or rebuilt, it then receives a "branded" or rebuilt title.

What's the difference between a salvage title and rebuilt title?

Cars with salvage titles have been declared a total loss and can’t be driven. But once a salvage car has been repaired and passes an inspection from a state-approved salvage inspection operator, it can qualify for a rebuilt title—meaning it can be registered, driven and sold.

However, sometimes people mistakenly refer to rebuilt cars as salvaged title cars, even though they are two distinct and different vehicle titles.

How can I tell if it's a salvage vehicle?

"State laws require that the seller inform a buyer in writing" that the vehicle they want to purchase is salvaged, Suarez says. But in several cases Mercury found the information was not clearly disclosed to buyers.

To make sure you're not unknowingly purchasing a salvage vehicle, you check the car's vehicle identification number (VIN) or title.

The federal government's National Motor Vehicle Title Information System (NMVTIS) provides information on a vehicle's condition or history. You can purchase those reports from a number of companies.

CarFax and other private companies also offer information on a vehicle's history.

Can I get insurance for a salvage title car?

Not all car insurance companies will insure salvaged vehicles. For instance, Travelers and Direct General are two companies that do not write policies for salvage cars.

If you buy back a car from an insurer that has totaled it, you also may have more luck getting them to issue you a policy, says Penny Gusner, consumer analyst for CarInsurance.com. The insurer knows exactly why the car was declared a total loss and will typically have photographs and other details of the damage.

At Mercury, which insures both new and used vehicles, about 2.5 percent of the company's policies are written for salvaged cars, Suarez says.

However, if you're trying to insure a salvage vehicle following a natural disaster, it might be harder to get any coverage, Suarez says. "Carriers tighten up on their desire to write salvage vehicle (policies)."

Car insurance companies are concerned after such events, he says, because unscrupulous car dealers may simply clean up the car so it looks presentable, but not actually repair the damage.

What documentation do I need to get insurance for a salvage car?

To obtain auto insurance for these vehicles, you'll need to have a copy of your title, along with your registration and VIN, Gusner says.

Can I get full coverage?

Some insurers will only offer you liability coverage, which protects you if you're at fault in an accident and injure someone else or damage their property, Gusner says.

They may not be willing to provide comprehensive coverage, which protects you in the event of damage to your car that isn't due to an accident. It would cover things such as theft, vandalism or damage from a natural disaster. You also may be unable to obtain collision coverage, which covers your vehicle if it's damaged in an accident.

Other carriers will provide all types of coverage for salvaged cars, Suarez says.

Will I pay extra for car insurance?

What you pay for insurance will depend on the carrier you choose.

You probably won't pay less. Policies are written based on the year, make and model of the vehicle. The diminished value of the vehicle usually isn't taken into account, Suarez says.

You may pay more. Some companies charge you extra for insurance, even though your vehicle is worth less than comparable cars.

Mercury is preparing to implement a 20 percent surcharge on such vehicles, Suarez says. "It came to our attention because we have seen a trend in our competitors of charging more for these vehicles."

You may get less if the car is totaled. Your vehicle is worth less in the event of total loss than one with a clean title. How much less is a matter of negotiation - and one of the prime reasons some insurers stay out of this area altogether.

Leave a Comment
Ask a Question
Comments
Tell us your thoughts
Leave a Comment
3 Responses to "How to insure a salvage or rebuilt title car"
Disclaimer: Answers and comments provided are for information purposes. They are not intended to substitute informed professional advice. These responses should not be interpreted as a recommendation to buy or sell any insurance product, or to provide financial or legal advice. Please refer to your insurance policy for specific coverage and exclusion information. Please read our Terms of Service.