Buying a pickup truck used to just involve deciding how much towing capacity you wanted, but automakers today offer as many as 75 different versions of some models. That makes it all too easy to choose the wrong truck for your needs.

"You have to make sure you know what you're doing when you're buying a truck and what your needs really are," says Karl Brauer, senior editor of Kelley Blue Book. "Do you really need the most powerful engine or the biggest bed? Do you need an extended or crew cab, or can you make do with a regular one? You want to be realistic."

It doesn't help that today's trucks come with a wide array of engines, cabin sizes, bed lengths -- and prices. Some entry-level models list for around $25,000, but fully loaded vehicles can top $70,000.

Here's a look at seven common mistakes truck buyers make, as well as expert advice on how to avoid them. All dollar figures refer to manufacturer's suggested retail pricing as of September 2015 for base 2015 versions of each vehicle listed, excluding tax, title, destination fees and rebates.

Purchase a pickup with too big or too small a cabin and you'll either waste money on more truck than you need or find you or your passengers crammed into insufficient interior space.

Different brands sometimes use names like "Quad Cab" or "SuperCab," but those all basically equate to a cabin that's either small, medium or large.

Brauer says you can pick the right cabin size by thinking about how many passengers you'll typically have in your truck.

"Drivers who plan to carry multiple people on a regular basis should get an extended or crew cab," he suggests. "But those who don't should probably just stick to a regular one."

Going with the smallest cab you need will save you money. For example, a regular-cab Ram 1500 lists for $25,660, while an extended-cab version costs $29,835 and a crew-cab one starts at $32,475. Buyers should also keep in mind that some extended- and crew-cab models come with smaller truck beds than regular-cab versions do, cutting cargo capacity.

Trucks typically come with your choice of short, medium or long cargo beds. Again, picking the wrong one will either boost your price unnecessarily or leave you with a vehicle that's too small for your needs.

Brauer says you can pick which size to get by thinking about what you plan to use your truck for.

"If you commonly haul seven or eight-foot-long cargo, you want to make sure you get an eight-foot bed," he says. "But just as with cab size, you want to be realistic about how big the things you haul around are."

He says avoiding a bed that's longer than you need will not only cut your purchase price, but reduce fuel costs and give you a truck that's easier to both drive and park.

Today's trucks offer everything from surprisingly efficient 4-cylinder gas engines to 8-cylinder diesel behemoths, but picking incorrectly can saddle you with either an excess sticker price and fuel costs or too low a cargo and towing capacity. (Automakers rate trucks on both how much cargo vehicles can haul in the bed and how much they can tow with a trailer.)

"The rule of thumb is that you can probably get away with one of the smaller engines if you rarely tow or carry more than 500 pounds," he says. "But if you plan to tow 2,000, 3,000, 5,000 pounds or more on a trailer, you'll want to go for the middle- or upper-range of available engine power."

4. Buying diesel if you don't need it

Many trucks come with your choice of gasoline or diesel engines, with diesels usually offering greater cargo and towing capacity but costing more money.

For instance, you can get either a gas or diesel engine on a Ram 1500. Base versions start at $25,660 and come with a gas-powered V-6 engine that can tow 7,600 pounds. But spending an extra $4,770 will move you up to an automatic transmission and a turbocharged V-6 diesel engine that boosts towing capacity to 9,200 pounds.

"Diesel engines have more torque, so they provide more pulling and towing power -- and get better mileage, too," Brauer says.

As with other truck considerations, the expert recommends picking your engine type based on how you plan to use your truck.

He adds that diesels no longer produce the engine noise, sluggish acceleration and smelly exhaust that they once did, so "the only real disadvantage is that they cost more upfront and you've got to make sure you know where to find diesel fuel."

5. Buying too many (or too few) amenities

Some entry-level trucks barely come with air conditioning, while high-end models offer everything from perforated-leather seats to high-tech audio systems. Too many amenities will cost you an arm and a leg, but too few will leave you with a truck you don't enjoy driving.

"You have to decide how much you need versus how much you want, because pretty much everything you add will cost money, increase your insurance premiums and reduce your gas mileage," Brauer says.

6. Not considering insurance and gas costs

Sure, one dealer might offer you a great price on a given pickup, but higher insurance costs, fuel expenses, depreciation or other outlays might mean you'll spend more in the long run.

"You always want to look at total ownership costs -- not just price -- when shopping for a truck," Brauer says.

But it's not that straightforward if you factor

in depreciation, fuel and other ownership costs.

According to KBB, you can expect to pay $40,496 in total out-of-pocket expenses to own the Silverado for five years vs. $41,957 for the Ram. That's $1,461 savings with the Chevy -- something to keep in mind when you're debating which model to buy.

Another mistake to avoid is buying gap insurance from a dealership instead of your insurer. Gap insurance provides valuable protection during the early years of your truck's lif

e if you have a loan or a lease. Most lenders require that you buy this coverage.

If your truck is damaged while still new, gap car insurance will pay the difference between the actual cash value (ACV) of the vehicle and the current outstanding balance on your loan or lease.

If you purchase gap insurance from a car insurance company, it typically costs about $20 a year, according to the Insurance Information Institute, a trade group.

Buying gap insurance from a lender or dealership is much more expensive. Lenders typically charge between $500 and $700, according to United Policyholders, a non-profit consumer advocacy group. 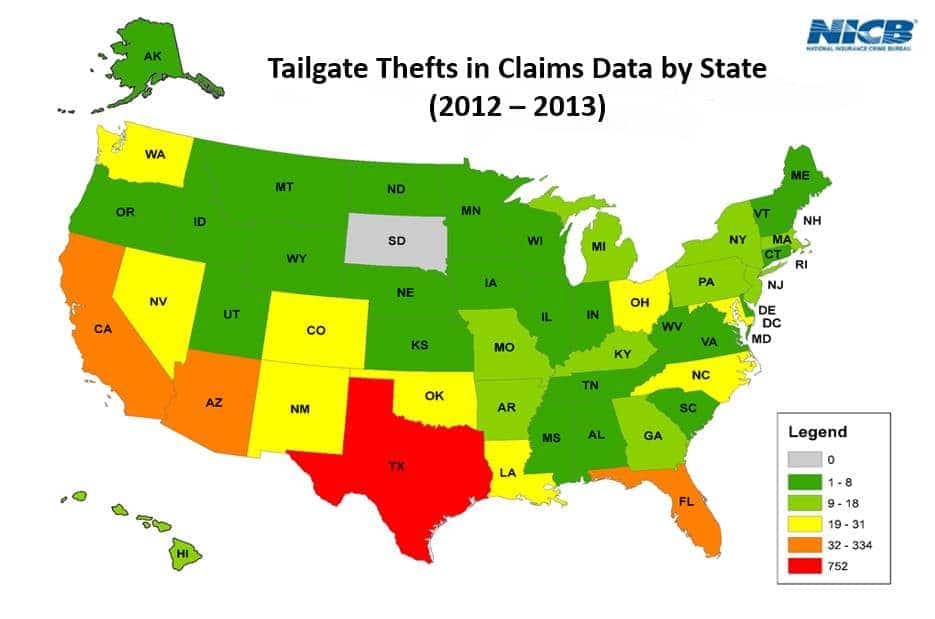 Thieves may be able to unlatch and steal your truck's tailgate in a matter of seconds if you don't have a lock on it.

"It's really quick -- you don't even need any tools," says Frank Scafidi, spokesman for the National Insurance Crime Bureau, which found that claims for such thefts rose 31 percent between 2012 and 2013 (the latest years with data available).

The NICB says high-end tailgates can cost as much as $3,000 to replace, so you definitely want some sort of lock to protect your truck.

You can buy a model with a built-in tailgate lock, or you can pick up an aftermarket one at an auto-parts store for as little as around $12.

Even with anti-theft measures in place, you may discover your tailgate has been stolen or damaged by thieves. Penny Gusner, the consumer analyst for Insure.com, explains the role comprehensive coverage plays in guaranteeing that a stolen tailgate is replaced or a damaged one fixed.

"Comprehensive insurance basically covers situations that are 'other than collision,' such as theft, fire, vandalism or damage arising from natural events, like a hail storm," she says. "It covers the theft of your whole vehicle, or parts or equipment that are permanently attached or installed to your vehicle. So, a stolen tailgate is covered."

Leave a Comment
Ask a Question
Comments
Tell us your thoughts
Leave a Comment
1 Responses to "7 mistakes truck buyers make"
Disclaimer: Answers and comments provided are for information purposes. They are not intended to substitute informed professional advice. These responses should not be interpreted as a recommendation to buy or sell any insurance product, or to provide financial or legal advice. Please refer to your insurance policy for specific coverage and exclusion information. Please read our Terms of Service.