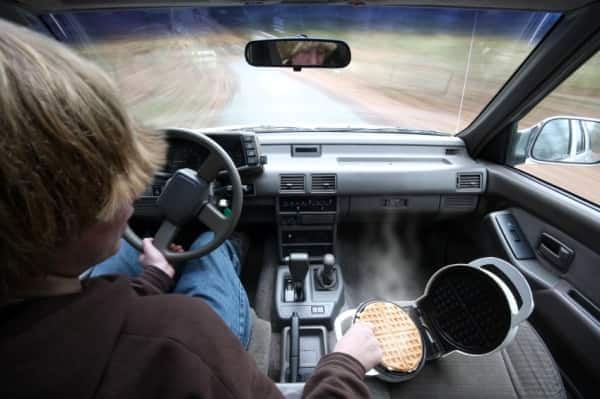 If you're among the 94 percent of Americans who think drunken driving is a major safety problem, then maybe it's time to check whether you're not doing something behind the wheel that's just as dangerous. We found 10 behaviors and could easily have found more.

"Driving is one of the most dangerous things people do every day, yet we often take it for granted," says Michael Green, a spokesman for AAA.

Distracted driving -- which accounts for only part of the problem - was responsible for more than 3,300 highway deaths alone last year, along with nearly half a million injuries.

"All it takes is a split second and your life, or someone' else's, is changed forever," Green says.

A risk is a risk: At-fault accidents

Sure, a DUI is a serious violation, but any careless driving can carry repercussions just as devastating.

Cause an accident and you're potentially criminally and civilly liable. Not to mention that you'll still be branded a high risk by car insurance companies, for which you'll be charged markedly steeper car insurance rates.

"A couple of at-fault accidents can do as much damage to your insurance rates as a DUI conviction, according to our data," says Des Toups, managing editor of Insurance.com. "Nationwide, the average increase after a first-time DUI conviction - without an accompanying accident - was 76 percent. But the increase after two at-fault accidents where the insurance company paid out at least $1,000 was 99 percent."

Here are 10 things that are just as risky as drunken driving:

Leave it to "Mythbusters" to test this one. After the AAA Foundation for Traffic Safety revealed some startling statistics on drowsy driving -- -responsible for one in six auto fatalities yet done by a third of people in the prior month alone -- the TV show pitted sleepy driving against tipsy driving. Which had the more profound effect on driving ability?

One track mimicked city driving, the other monotonous country roads. The results: Staying awake for 30 hours straight made one subject perform 10 times worse overall than he had after having two drinks; the second performed three times worse on lack of sleep.

Young drivers, who lack the experience and judgment to break for a rest, were the most likely to have fallen asleep at the wheel, according to AAA.

Tens of millions of Americans may be unwittingly driving under the influence -- of sleeping pills. Two years ago, the FDA advised manufactures to halve the active ingredient (Zolpidem) in over-the-counter sleep aids, saying users might remain impaired the next morning on higher doses despite feeling wide awake.

The federal agency had already warned manufactures to put warning labels on the pill bottles after some users reported getting up and driving in their sleep. Some people remembered drifting off only to come to on the side of the road, where they were being arrested for driving impaired.

Sales of sleeping pills have skyrocketed over the last decade, in part due to increased advertising.

3. When you've really gotta go: Driving when you need to use the bathroom

Turns out that holding your bladder can make you lose your mind -- or at least the ability to focus.

When neuroscientists at Brown University gave volunteers glass after glass of water then denied them a bathroom visit, the volunteers began to perform as poorly on simple tests -- like recalling the color of a playing card after one second - as those with a .05 blood-alcohol level, the equivalent of a 2 1/2-drink buzz.

It's classic distracted driving: The brain can only concentrate on one thing at a time. "You have to exert voluntary control over muscles that really want to relax," lead researcher David Snyder said.

We've all experienced that odd yet frightening, sensation: You pull into the driveway only to realize you don't remember driving home. Oh how the mind drifts.

A startling analysis of federal crash data by Erie Insurance concluded that 62 percent of the 6,500 distracted driving fatalities recorded in a two-year period could be chalked up to daydreaming, that favorite of pastimes. That's more than texting or talking on a cellphone. Sure, in an emergency, the brain springs into action, but only after a minor delay.

The expert suggestions, as told to Popular Mechanics: Let your eyes do the wandering instead, by tracking objects along the road; vary your route; practice defensive driving; or even chew on something crunchy.

5. Texting is worse than you think: Texting while driving

At least twice as bad as drunken driving. That's how dangerous the research says texting behind the wheel is, in case drivers still aren't getting the message. And apparently they're not. In one of the first federally funded stings, Hartford, Connecticut, police ticketed nearly 200 of drivers on the first day.

First offenders got a $150 fine. Compared with a DUI, which brings jail time, fines and steep insurance rates for an average total of $10,000, that's a mere tap. Drivers want tougher laws. In a survey by Insurance.com this year, three-quarters of drivers said texting was more like drinking behind the wheel than speeding or running a stop sign.

Using a smartphone can be four to six times as distracting as alcohol at low levels, said David Greenfield, an assistant clinical professor of psychiatry at the University of Connecticut. "It requires a significant amount of cognitive capacity."

Legislators may be the lone holdouts in claiming cellular conversations are safe behind the wheel as long as the driver isn't holding the phone. Scientists overwhelmingly disagree. Several studies even pitted the hands-free talkers against drunks, and the talkers did no better.

In a well-publicized University of Utah study, drivers with a .08 blood-alcohol level actually drove more accurately than ones talking on a phone. Three of the 41 hands-free cellphone talkers crashed into the pace car in front of them. Their hands may have been free; their brains were not.

"If legislators really want to address driver distraction, then they should consider outlawing cellphone use while driving," study co-author Frank Drews, an assistant professor of psychology, told reporters at the time.

7. A bit too mellow? Driving while high on marijuana

Drunks tend to fixate on an object, then drive straight into it. People who are high on marijuana, by contrast, tend to slow down and forget where they're going. This, alongside the fact that stoned drivers can often ace field sobriety tests, has led pot smokers to declare their drug safe for driving.

But perhaps they best stay home.

As legal marijuana use grows, so too have the incidents of pot-related accidents on the nation's roads.

Tetrahydrocannabinol, or THC, impairs a person's ability to focus and to react quickly. Its role in deadly crashes has tripled in a decade, with pot found in the system of 10 percent of auto crash fatalities, according to the American Journal of Epidemiology.

You don't have to be angry to drive aggressively, but anger certainly boosts the chances that you will speed, weave, block lanes or engage in other driving behaviors that combined kill two to four times as many people as drunken drivers.

Anger hogs your attention and clouds your judgment. "It makes it more likely that you're going to snap, or do something impulsive," says Leon James, a professor of psychology at the University of Hawaii and co-author of the book, "Road Rage and Aggressive Driving."

And unlike a night's bender, anger is highly contagious. You cut someone off, now they're angry, and so on. James' tip: Pull over and do something else. Or sing. Singing requires deep breaths, which eases anxiety.

If those don't work, watch some online videos about road rage accidents and you might just let it slide next time.

9. Driving with your partner: Spouse spats

While it's true that talking with someone who is in the car is less distracting than talking by phone, it may not always apply when that person is your spouse.

A study in the United Kingdom that set couples to arguing -- either in the car together or spatting by phone -- found that while drivers in both situations experienced reduced reaction times and unstable speeds, the drivers seated beside their spouse did worse.

Co-author Terry Lansdown, of Heriot-Watt University in Edinburgh, told The Scotsman newspaper that "one reason the drivers performed better when on the phone could be because they could ignore the partner more easily."

Just a head cold? Tell that to the guy you rear-ended because it took you twice as long to react.

United Kingdom parts retailer Halfords , in conjunction with insurance firm Young Marmalade, set out to study the effects of a mild flu or bad head cold on a driver's performance and found reaction time cut in half. The drivers performed at the same level as those who had consumed four shots of double-whiskey. A tandem survey revealed that 40 percent of drivers admitted to driving when they were sick.

Think about the effect of a single sneeze. At 65 mph, that means you'll travel 57 feet with your eyes closed. Tell the boss you're calling in sick.

Leave a Comment
Ask a Question
Comments
Tell us your thoughts
Leave a Comment
0 Responses to "10 things as dangerous as driving drunk"
Disclaimer: Answers and comments provided are for information purposes. They are not intended to substitute informed professional advice. These responses should not be interpreted as a recommendation to buy or sell any insurance product, or to provide financial or legal advice. Please refer to your insurance policy for specific coverage and exclusion information. Please read our Terms of Service.