Updated on: Apr 23, 2019
Editorial Integrity - Why you should trust us?
Our mission is to help you make educated insurance decisions with confidence. We have an advertising relationship with some of the offers included on this page. However, this doesn’t influence our editorial judgment or recommendations. The rankings and listings of our reviews, tools and all other content are based on objective analysis, and we fully own our opinions.

Find out the role credit plays in car insurance pricing, how much more drivers with bad credit pay for coverage, as well as how you can still save on auto insurance, even if you have bad credit. 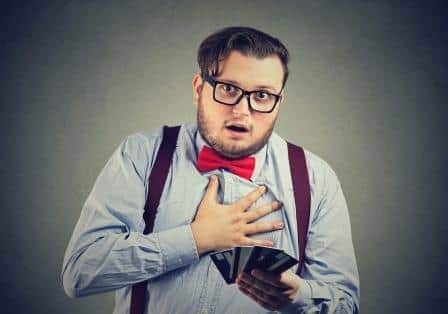 Drivers with poor credit pay a rate that is 71 percent higher on average than a driver with good credit. That’s about $1,000 more a year, a new CarInsurance.com rate analysis shows. It’s more than twice as much as the average premium hike (32 percent, or $455 annually) for an accident, according to CarInsurance.com’s data.

That’s right, missing credit card payments could result in your auto insurance rates rising higher than if you crashed your car.

The situation is much worse in some states. For example, in the following states, drivers with bad credit will pay a rate that is higher by:

In nine other states, drivers with bad credit pay an average of least 75 percent more than drivers with good credit.

There are multiple factors driving insurance costs in Michigan that go beyond poor credit,  says Dyck Van Koevering, general counsel of the Insurance Alliance of Michigan. That includes a law requiring drivers to purchase unlimited, lifetime medical benefits with their auto insurance.

“This one-of-a-kind mandate is driving up the cost of auto insurance for drivers across the state, making Michigan the most expe

nsive state in the nation for auto insurance,” he says.

He also notes that drivers in neighboring states such as Ohio and Indiana – which also use credit information for setting insurance rates – pay only half as much for insurance as drivers in Michigan.

How insurance companies use your credit history information

Technically, insurers don’t use your credit score to determine your rates. Instead, they calculate what is known as a “credit-based insurance score” using the information contained on your credit report.

Both scores are based on information in a credit report, but “they predict very different things,” says Christine O’Brien, president of the Insurance Council of New Jersey.

Why do car insurance companies use credit scores?

Most insurers use credit-based insurance scores as a way of gauging the risk that a policyholder might pose. Ninety percent of car insurance companies nationwide use credit information when determining insurance rates, according to the National Association of Insurance Commissioners.

“Research has shown that people who manage their credit well have fewer insurance claims,” says Lynne McChristian, a communications consultant with the Insurance Information Institute.

That’s likely because people with high credit scores may be less likely to file relatively small claims. For example, if you caused $2,000 in damage to someone’s car, you might opt to pay out of pocket to keep your rates from rising. Someone with a lower credit score might not have the resources to do that, Gonzalez says.

States that don’t use credit scores

Other states may have certain protections that prevent your credit record from impacting your auto insurance rates in some circumstances.

For example, O’Brien says the New Jersey Department of Banking and Insurance requires insurers to provide exceptions for consumers whose credit information has been hurt by extraordinary life events, such as:

While you work to improve your credit, it pays to shop around for auto insurance coverage, because you can still save money, even if you’re considered a high-risk driver. CarInsurance.com data show that drivers with bad credit can trim $2,000 from their yearly policy cost, on average.

Insurers use different methods to assess risk and price policies, so no two companies will raise your rates the same amount. By comparing rates from multiple carriers, you can see which one has the lowest price. But not all insurance companies are the same. Here we’ll explain the benefits and drawbacks of comparing rates from a variety of carriers.

Companies that don’t do credit checks

For drivers with bad credit, it may seem like the best way to get cheap rates is to find an insurance company that doesn’t look at credit scores. That’s not typically the best route to take.

Auto insurers who don’t check credit specialize in high-risk drivers. These drivers cost insurers more than drivers with good credit and clean records, because they are more likely to file more claims that insures have to pay. That means even though these companies skip a credit check, they may still be more expensive than traditional carriers, says Penny Gusner, CarInsurance.com consumer analyst.

“If you have bad credit, the best way to find the cheapest rates is to compare quotes from traditional companies as well as those that cater to high-risk drivers,” says Gusner. “Each insurer uses its own formula to set rates. So a traditional company that has a low surcharge for bad credit may be less expensive than a company that primarily serves high-risk drivers and doesn’t do a credit check.”

Insurance companies that don’t account for credit when determining rates are typically smaller, regional carriers that have fewer resources than the big companies. Gusner says be sure to check complaint filings with your state department of insurance website or at the National Association of Insurance Commissioners (NAIC) website. “And be sure to check their financial rating with a company such as A.M Best to be sure they are solvent enough to pay claims,” says Gusner.

Companies that cater to high-risk drivers but check credit

There are also car insurance companies that serve high-risk drivers that use credit scores. These companies may have comparable rates to traditional carriers, or rates that may be even cheaper. Many of these are separately branded companies owned by major carriers.  Notable ones include:

Some of the major insurance companies own subsidiaries that focus on high-risk drivers. Geico Casualty, owned by Geico, is one example. Progressive also generally provides high-risk drivers non-standard policies at affordable rates, compared to other big players in the industry, says Gusner.

“When you ask for quotes and go to buy a policy, you do so like any other driver,” she says, “but if deemed high-risk, you’d be assigned to the division that serves those drivers, likely without even knowing it.”

The bottom line is that you can still pay a lower rate with some traditional carriers’ coverage for drivers with bad credit.

You’ll see in the table below that Geico’s national average rate for drivers with bad credit is the cheapest among insurers studied by CarInsurance.com. 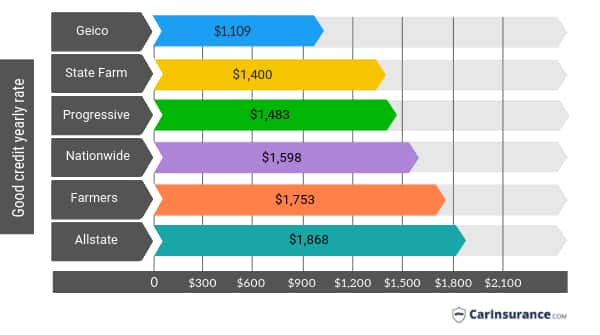 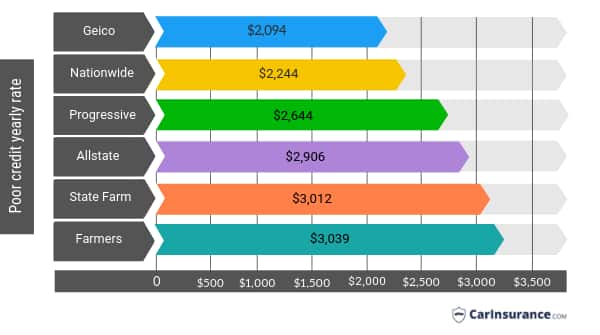 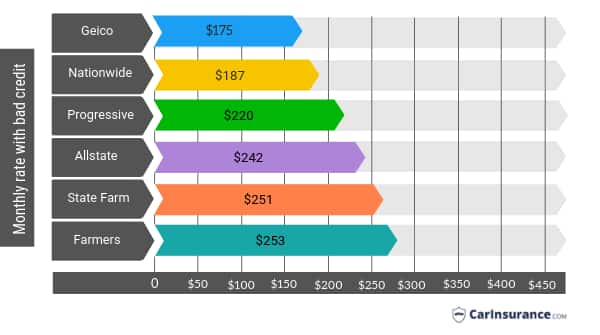 To find the best rate, Gusner recommends getting at least three price quotes from multiple insurance companies.  CarInsurance.com’s rate analysis found that drivers with bad credit can save, on average, $167 a month by comparing rates.

“Credit checks by car insurance companies are considered a ‘soft pull,’ so they don’t affect your credit score,” says Gusner. “That means you can compare quotes from multiple insurers without having your credit score dinged.”

Below you’ll see how major carriers compare on rates for bad credit drivers in your state. Enter your state in the search field to see how much you can save.

Also keep in mind that a good credit score alone will not guarantee you a low rate on your car insurance.

“Drivers with good credit may get lower rates, but their driving record is not ignored,” McChristian says.

To get the lowest rates, you need to avoid accidents and violations. Other tips for lowering your rates include:

Tips on improving your credit score

Of course, it always makes sense to maintain the highest credit score possible.

“Maintaining a good credit history pays off in many ways, including helping to lower your insurance costs,” McChristian says.

For example, people with good credit typically get the best rates when applying for a home mortgage or a car loan. For those reasons and more, maintaining a good credit score is crucial. A FICO score of 670 to 739, out of 850, is considered “good” credit.

“Think about protecting your credit rating in the same way you’d protect other valuables,” McChristian says.

Among other things, that means:

If your credit report is not in the best shape, don’t despair. Handling your finances responsibly should help you eventually turn things around.

“Over time, insurance scores can be improved,” O’Brien says.

-with reporting by: Chris Kissell

CarInsurance.com commissioned Quadrant Information Services to field rates from 10 ZIP codes in each state from up to six major insurers, for a driver with good credit and a driver with poor credit, for full coverage. National average is based on states where credit is used in pricing policies.