Published on: Apr 01, 2016
Editorial Integrity - Why you should trust us?
Our mission is to help you make educated insurance decisions with confidence. We have an advertising relationship with some of the offers included on this page. However, this doesn’t influence our editorial judgment or recommendations. The rankings and listings of our reviews, tools and all other content are based on objective analysis, and we fully own our opinions.

States with most car insurance claims for spring storm damage 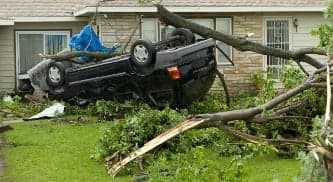 Wrecks aren’t the only thing that can damage your car — spring ushers in the peak time for car insurance claims for damage from hail, floods and tornadoes.

The Farmers Insurance Seasonal Smarts Digest ranks states with the most claims for damage related to spring weather hazards. This type of damage is typically covered by comprehensive insurance, which pays to fix your car if it’s dinged by hail, soaked by floodwaters or hit by a falling object, such as a tree, blown over by heavy winds. Comprehensive also covers cars that are lifted by severe winds, flipped and mangled upon crashing back to the ground.

Collision coverage comes into play if you hydroplane and flip your car or hit another car or object. It pays for damage to your car. Both comprehensive and collision come with a deductible – the higher it is the lower your rate – and pay out up to the cash value of your car.

Here we outline states most prone to severe spring weather damage claims. The rankings are according to Farmers data from March to May 2013-2015, based on the percentage of states’ claims due to each specific hazard during spring.

Between March and May from 2013 to 2015, 403 tornadoes occurred, on average, each year, according to the Farmers report. Fifty-nine percent of those from last year occurred during the three-month March to May window. Additionally, seven of the top 10 days for greatest tornado activity in 2015 occurred in the month of May. This points to why Farmers found that nearly two-thirds (63%) of tornado-related car insurance claims are filed between March and May. Be prepared by knowing the role comprehensive and collision play in tornado damage claims.

Here are the top five states for tornado-related damage claims:

More than half (51 percent) of all rising water and flooding claims occur in the spring between March and May, according to Farmers data. Last year proved to be an especially harsh year, as flood claims more than quadrupled from the same three-month window in 2014.

While just two feet of rushing water can sweep away a car, flash floods can cause rushing water of 10 to 15 feet high. And though some states are more vulnerable to flooding, all states have experienced flooding over the past five years, according to Farmers.Here are the top five states for flood-damage claims:

At Farmers, 58 percent of all annual hail claims related to damage to vehicles are reported between March and May. May tends to be the height of hail damage season, with 29 percent of hail claims occurring in this month. When deciding if you should file a hail claim, consider the cost of repair for hail damage compared to your deductible and how much your car is worth. Skip hail damage claims if the repair cost doesn’t significantly exceed what you’ll pay out for your deductible.

Here are the top five states for hail claims:

Comprehensive car insurance typically covers the cost of full glass replacement or repair, although deductibles may apply, depending on state laws.

Farmers data shows that 26 percent of the year’s glass claims occur during the spring, which represents a 23 percent increase over the number of glass claims reported during winter months. These claims have steadily been on the rise in recent years. Glass claims jumped 11 percent in 2014 compared to the same time period in 2013. In addition, 2015 saw an increase of 15 percent over the number of claims reported in 2014.

Here are the top five for broken glass claims: