Property damage liability: What happens when you damage public property?

Aaron Crowe
Author
Our Carinsurance.com team is made up of regular people with insurance policy needs, just like you. We just happen to know a little more about insurance than the average bear.
twitter
| Updated on: Jul 12, 2021

Managing Editor
Ashlee is a dynamic business writer with a special focus on finance. With an MBA and more than twelve years in the finance industry, Ashlee brings a practical and relatable perspective to the area of business writing. She is passionate about personal finance and empowering others with the knowledge to succeed. When she isn’t writing, Ashlee manages a team of supply chain professionals at a university and enjoys spending free time with her partner and dog on their farm in Kentucky.
Read Full Bio >>
twitter
Editorial Integrity - Why you should trust us?
Our mission is to help you make educated insurance decisions with confidence. We have an advertising relationship with some of the offers included on this page. However, this doesn’t influence our editorial judgment or recommendations. The rankings and listings of our reviews, tools and all other content are based on objective analysis, and we fully own our opinions. 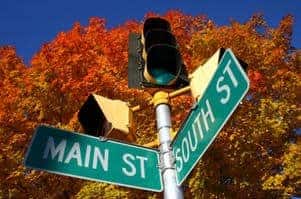 Perhaps you consider yourself lucky because you didn’t hit another car. Instead, you looked up just in time and swerved … right into a stop sign.

You’re as liable for the damage you do to public property as to another driver’s car. And now, with times tight, many states and cities are deciding to collect.

The Indiana Department of Transportation, for example, began sending invoices in 2011 to the 4,000 or so drivers who damaged stop signs, guardrails or other public property each year after enlisting law enforcement to match accidents to damage done. The program is called DamageWise.

With a similar program assigning guardrail damage to crashes, North Carolina reported savings of $8.6 million since 2004.

Depending on your state, the bill for the damage you’ve done can reflect either the direct cost of the item hit or arrive “fully loaded,” reflecting behind-the-scenes engineering, labor and administrative costs — even the costs of after-hours overtime.

Does property damage liability insurance cover me if I hit a guardrail?

Unless you have collision coverage, you’ll have to pay for your own car repairs, but your property damage liability insurance — the part that’s mandatory in every state except New Hampshire — covers the havoc you wreak on public property.

If the state links damage to public property with a crash you caused, expect a stern-sounding letter in the mail within a few weeks, demanding payment or an introduction to your car insurance company.

Your insurance stops when the money runs out. In several states, the minimum legal property damage liability coverage — the last number when you see coverage expressed as 25/50/5, for example — is just $5,000.

Penalties for nonpayment are all over the map.

Hawaii, for instance, charges you $25 extra if you’re more than 30 days late. Kansas, Kentucky and Oregon can seize your income tax refund. And Georgia, Kansas, Kentucky, Michigan, Pennsylvania and South Dakota can revoke your driver’s license — which has huge consequences for your future car insurance prospects.

How much does it cost to fix a guardrail?

Here’s what public property costs to fix, including signs, meters and fences and more.

1. Traffic signal: $3,000. If you happen to take one down a pole-mounted signal in Long Beach, California replacement costs $3,000. If somehow you managed to snag one of the elaborate traffic signals strung overhead, the Arizona Department of Transportation says the bill could be $80,000 to $100,000.

2. Parking meter: $700. After putting all the change from your car’s ashtray into a parking meter day after day, shouldn’t this be a freebie? Alas, Long Beach would bill you $700.

3. Guardrail: $889. The guardrail itself is only $50, but equipment and labor bring the cost up. For a basic, non-engineered guardrail replacement in the city of Concord, California this cost includes a city worker billed at $89 an hour and another billed at $73 an hour. It also includes use of flatbed and pickup trucks, and materials such as wood posts, wood blocks and the standard guardrail end. After-hours response is extra.

4. Street light: $5,342. In Concord, replacement of the standard 20-foot pole includes $3,000 for setting a new foundation, and contracting out the work to erect the pole costs $1,150. Like the guardrail, Concord’s estimate doesn’t include extra costs if city workers respond after regular business hours.

5. Stop sign: $511. Like many bills, labor costs quickly add to the overall cost. In Concord, the sign itself is only $50, but a few extra parts, some equipment and a maintenance worker billed at $73 an hour and a general laborer billed at $55 an hour increase the expense. Add in more money if you hit the stop sign at night. And no, you can’t install the new sign yourself.

6. Fire hydrant: $1,000. That’s the replacement cost from the Contra Costa Water District in Northern California. A spokesperson says the water district had 16 fire hydrant hits last fiscal year and has had 12 so far this fiscal year. Some cities might try to bill you for the lost water, too.

7. Chain-link fence: $107 for 10 feet of fence. According to a 2011 report by the California Department of Transportation (Caltrans), the average cost for replacing chain-link fence is $35.73 per meter, though prices vary across the state. A 10-foot fence would cost about $107, by our calculations. Congratulations if you damage only 10 feet of fencing, though. One Caltrans district replaced 1,968 feet of fence — 600 meters — at $50 a meter. Total bill: $30,000.

8. Concrete barrier: $414 for a 6-foot section — though they’re usually strung together in miles-long chains. Again, this is a Caltrans estimate based on average prices in the state, and costs vary by region. Prices vary from $42 to $130 per linear foot, so at the average cost of $69 per foot, a 6-foot section would cost $414.

9. Mail box: $750. If you happen to hit one of those blue curbside mail collection boxes, you’ve nailed a piece of history. The U.S. Postal Service has removed about half of them over the last decade. But if you had to replace one, we found an otherwise identical gray collection bin for $750, ready for blue spray paint.

10. Roadside sign: $266. That’s for a small one on a wood post in California, according to Caltrans. It could be a simple “Turn Ahead” sign you didn’t notice and knocked over, or a more expensive two-post sign that costs $620 to replace. Ouch.

Learn more about What does car insurance cover?

Aaron Crowe
Author
Our Carinsurance.com team is made up of regular people with insurance policy needs, just like you. We just happen to know a little more about insurance than the average bear.