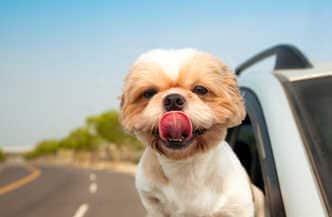 Americans shared their homes with 377.4 million animals in 2011, according to the American Pet Products Association survey.

Cats were the most popular pet, at 86.4 million, and dogs came in a close second with 78.2 million.

But while a car ride with a cat is an exercise in tension, a dog goes along for the fun of it. A recent AAA survey found that 56 percent of dog owners had driven with companions at least once a month over the past year.

Unfortunately, most people are driving dangerously when Fido is riding shotgun. Sixty-five percent admitted engaging in distracting activities such as petting their dog (52 percent) and using their hands to restrict the dog's movement when braking (23 percent).

Despite knowing better -- 83 percent agree that driving with an unrestrained dog is dangerous -- only 16 percent use a restraining device.

Adam Fell of Veterinary Pet Insurance says the most common types of injuries suffered by pets in car accidents are bruises and lacerations, chest and head trauma, major wounds, fractures and ruptured organs. All of these require extensive -- and expensive -- medical care.

So is my pet covered?

If the accident was your fault, your vet bills are your own problem, says Penny Gusner, consumer analyst at CarInsurance.com. A pet is considered personal property, and collision and comprehensive typically cover damage only to the vehicle.

On the other hand, if the other driver was at fault, you can make a claim against their property damage liability coverage. The bills for your car and the bills for your pet would come out of the same pot of money, so if the at-fault driver's limits aren't high enough to pay everything, you would still be on the hook.

Fortunately, a number of car insurers value your pet like a member of the family and include some coverage on their collision policies.

Progressive was the first insurer to add pet coverage back in 2007. Other insurers have jumped on the bandwagon, but availability varies by insurer and by state.

Here is a quick rundown of the major insurers that will cover your pet in an accident:

According to Dr. Jules Benson of Petplan Pet Insurance, pet insurance covers treatment for all accidental injuries including those sustained in car accidents, as well as illnesses.

Costs vary by pet age and size and the deductible you choose; $8,000 in coverage for an 8-year-old Lab would run about $42 a month.

The best way to keep your pet safe is to use a harness or crate when rolling with your pet. Experts recommend crating dogs or cats and putting them in the rear cargo area. In smaller cars, buckling them up in the backseat using a harness is the safest way to travel.

Harnesses are widely available and are priced from $15 and up depending on the pet size.

Dog trainer and pet expert Amy Robinson offers a few do's and don'ts for keeping your pet safe while in the car:

Leave a Comment
Ask a Question
Comments
Tell us your thoughts
Leave a Comment
0 Responses to "Pets and car insurance"
Disclaimer: Answers and comments provided are for information purposes. They are not intended to substitute informed professional advice. These responses should not be interpreted as a recommendation to buy or sell any insurance product, or to provide financial or legal advice. Please refer to your insurance policy for specific coverage and exclusion information. Please read our Terms of Service.