How snow and rain raise your insurance rates 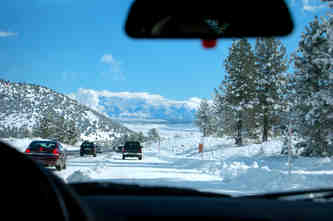 Snow can be pretty if you’re on the slopes or sipping hot cocoa inside your warm house.

But if you’re on the road in severe weather, pretty isn’t the word you’d use.

Data from the National Highway Traffic Safety Administration (NHTSA) show that, on average, there are over 5.8 million vehicle crashes each year.  Almost a quarter of these crashes are related to weather conditions such as rain, sleet, snow, blowing snow, fog, crosswinds, and wet, snowy, slushy, or icy pavement.

The weather-related crash numbers at the beginning of 2014 are almost guaranteed to be higher than average.  What does this mean for you as a car owner?

If you’re part of the statistics

For your vehicle to be protected from damages sustained in adverse weather, you need physical damage coverages of collision and comprehensive.  Each covers your vehicle in a different way.

Comprehensive covers theft, fire, vandalism, striking an animal, and what is called “Acts of God” or “Acts of Nature.”

For claims purposes, the definition of what falls under this category can vary.  However, a general definition given by the National Association of Insurance Commissioners (NAIC) for an Act of God is “an unpreventable accident or event that is the result of natural causes.”

Thus, if a storm causes a frozen tree branch or monster icicle to fall on your car, smashing the windshield and denting the hood, comprehensive coverage would cover the damage minus your deductible amount.

If you’re behind the wheel during a snowstorm and slide on ice and crash, then it would be a collision claim for your car’s damages.  Collision covers your vehicle minus your deductible when it hits or is hit by another vehicle or object.

If you damage another vehicle or hit a guardrail and the entity that owns it comes after you for the repair costs, those claims would go under your property damage liability coverage if you’re found legally liable for the incident.

Can a weather-related claim affect your rates?

In general, comprehensive claims aren’t usually considered at-fault because they are the result of incidents that are out of a driver’s control – like theft of your car or a hail storm – and so are less likely to be surcharged (have an extra charge added to your car insurance rates) than a collision claim.

Some states have put in place laws that prohibit insurance companies from raising car owners’ rates for making a comprehensive claim or for claims regarding acts of God.

For example, under the Massachusetts safe driver insurance plan (SDIP), an insurer cannot surcharge for comprehensive claims unless a driver has made four or more such claims adding up to $2,000 or more during the look-back period — and acts of God damages are excluded from this total.

If you instead make a collision claim, then you may be surcharged — especially if you’re found at fault.

As the Maryland state insurance regulator’s office once told me, car insurance companies see a snowstorm as an act of God but driving in a snowstorm as an act of man or woman or teenager.  This is why if you slide and crash on black ice, it’s usually found to be an at-fault accident (due to you losing control of your vehicle) that can result in you paying higher rates at your next renewal period.

Auto insurers may want to raise your rates for weather-related collisions; however, if state laws say otherwise, a surcharge cannot be applied.

For example, since 2011, Alabama has not allowed car insurance companies to cancel, non-renew or surcharge a policy solely based on a claim arising from a catastrophe, natural disaster, acts of nature, or weather-related causes.

While in many states, this type of law only refers to comprehensive claims, representatives of Alabama’s Department of Insurance confirmed here it includes weather-related auto accidents that would be filed under collision coverage.

However, in Alabama and other states that prohibit rate hikes for acts of nature or weather-related accidents, a car insurance provider typically is allowed to remove a claims-free or accident-free discount after such an event.

And if this year’s winter wonderland results in an overabundance of wrecks in your state, it’s likely your car insurance company will ask for a rate increase across the board. In such a case, your rates may increase a bit — even if you weren’t in an accident.  If this happens, all you can do is compare car insurance rates with other companies to find out who is offering the best deal.

— Penny Gusner contributed to this story.