How long are you considered a new driver?

New drivers pay some of the highest car insurance rates in the nation. Read to learn how long you are considered a new driver.

CarInsurance.com Editorial Team
Our Carinsurance.com team is made up of regular people with insurance policy needs, just like you. We just happen to know a little more about insurance than the average bear.
twitter
| Updated on: Jan 30, 2023

Executive Editor
Laura is an award-winning editor with experience in content and communications covering auto insurance and personal finance. She has written for several media outlets, including the USA Today Network. She most recently worked in the public sector for the Nevada Department of Transportation.
Read Full Bio >>
linkedin twitter
Editorial Integrity - Why you should trust us?
Our mission is to help you make educated insurance decisions with confidence. We have an advertising relationship with some of the offers included on this page. However, this doesn’t influence our editorial judgment or recommendations. The rankings and listings of our reviews, tools and all other content are based on objective analysis, and we fully own our opinions.

New drivers pay some of the highest car insurance rates in the nation, but it is no mystery why.

Adding a new 16-year-old driver to your policy will result in an average rate increase of 256%, depending on where you live and whether the new driver is male or female. If the new driver gets their own policy instead, the rates will be even higher — according to 2022 data.

Insuring a new driver is expensive, so it’s natural to wonder how long you are considered a new driver. 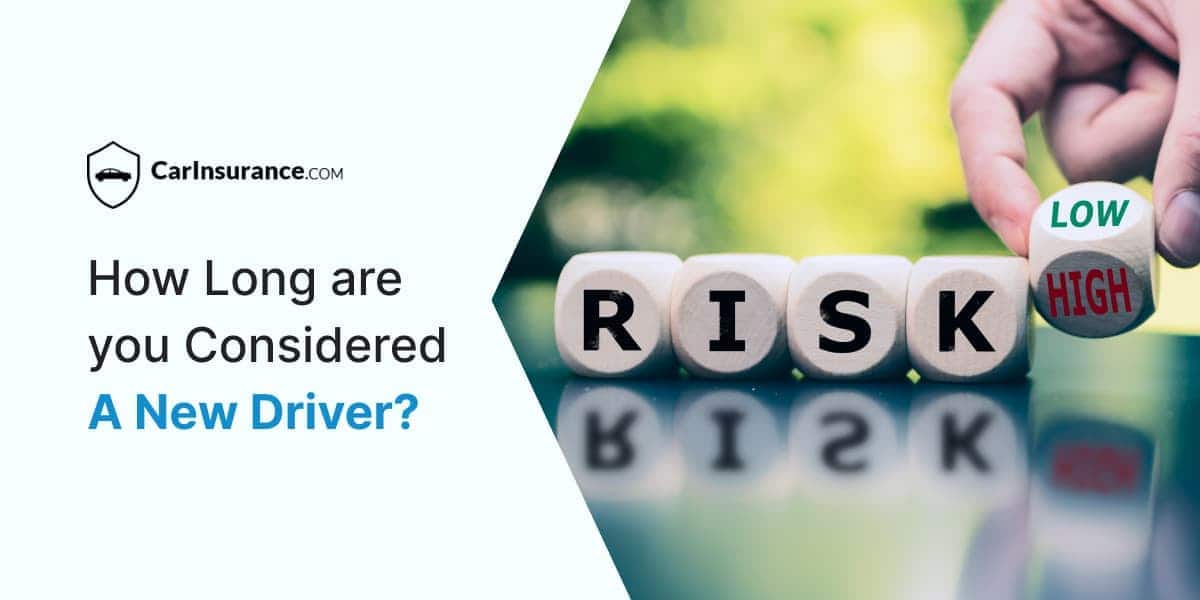 Who is considered a new driver?

A new driver is someone who has no driving history. This might include a teenager getting their driver’s license for the first time, someone getting a driver’s license later in life or a driver who has never had a license in the U.S.

How long are you considered an inexperienced driver for auto insurance?

Each insurance carrier used a different formula for defining what it takes for someone to move from new-driver status to experienced-driver status. For some car insurance companies, drivers are considered “new” until they have three years of experience on the road, for others, it can be up to nine years.

Some carriers do not look at the date you were first licensed, but instead, use your age as the only determining factor. In this case, typically that means you are deemed an inexperienced or “new driver” until age 25.

How long does an accident stay on your driving record for insurance purposes?

Typically, an insurance company will charge you more after an accident for three years after the date of the incident. State laws vary, however, on this issue, so in some cases, it can be as long as five or seven years. Major infractions, such as a DUI, remain on your driving report longer than a fender bender.

If your rates are too high due to being a new driver in an accident or convicted of DUI, see how high-risk drivers can get lower car insurance rates.

What is the best car insurance for new drivers?

CarInsurance.com commissioned Quadrant Information Services to run auto insurance rates for a 2022 Honda Accord LX at several coverage levels for a driver with a clean driving record in all ZIP codes in each state.

– Michelle Megna contributed to this story.

CarInsurance.com Editorial Team
Author
Our Carinsurance.com team is made up of regular people with insurance policy needs, just like you. We just happen to know a little more about insurance than the average bear.