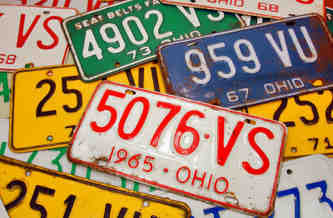 Thirty-one states require license plates at the front and rear of all vehicles. The complete list is below.

The earliest license plates on U.S. cars were made of wood, leather or even porcelain. By the time plates were standardized in size -- 12 inches by 6 inches -- almost all were made of steel. States later switched to aluminum, a more expensive material that is much cheaper to mail and doesn’t rust.

The primary purpose of license plates is to provide a unique identifier that connects every vehicle to a registered owner. They make enforcement of tolls, border crossing, parking regulations and other traffic laws possible, assist in identification of vehicles used in crimes or involved in hit-and-run accidents, and their reflective surface improves nighttime visibility.

Penalties for violating the two-plate law range from fix-it tickets to fines of up to $200 in Texas.

Tickets for missing license plates, assuming there is a valid registration for the vehicle, generally do not go on the driver’s motor vehicle record as a moving violation and are thus unseen by auto insurance companies. They should not affect your car insurance rates.

But don’t ignore the ticket. That, warns CarInsurance.com consumer analyst Penny Gusner, could lead to a suspended driver’s license for administrative reasons -- and that could send your rates through the roof.

*Vehicles in Nevada that do not have a designated mounting position for a front plate are not required to use one.

In addition, these border provinces in Canada require two plates:

*If resident lives within 20 miles of U.S. border

Leave a Comment
Ask a Question
Comments
Tell us your thoughts
Leave a Comment
0 Responses to "States that require front license plates"
Disclaimer: Answers and comments provided are for information purposes. They are not intended to substitute informed professional advice. These responses should not be interpreted as a recommendation to buy or sell any insurance product, or to provide financial or legal advice. Please refer to your insurance policy for specific coverage and exclusion information. Please read our Terms of Service.