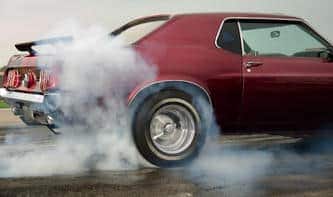 Gentlemen, start your engines and check your insurance policies.

A standard auto or home policy won't cover any type of racing damage or liability. Common forms of amateur motorsports such as drag racing, autocross, rallies and track days are excluded from regular auto insurance policies.

"Liability arising from the sponsoring or taking part in any organized or agreed-upon racing or speed contest or demonstration in which your insured car has active participation, or in practice or preparation for any such contest."

The sanctioning body for the type of racing you do may carry liability insurance. However, it will usually be bare bones coverage meant to protect those you injure. Most organizations aren't in the business of protecting drivers and repairing their vehicles.

So, what's an amateur racecar driver to do?

Would you push your car off a cliff?

Your daily-driven car becomes uninsured the minute you "race" it. The question is, what's racing?

As a general rule of thumb, if you are being timed, you're racing. If it's a contest, you're racing. Many policies simply exclude any damage that occurs at "a location designed for competition," which means even events such as high-performance driving schools might not be covered.

Street racing is also expressly prohibited in virtually all auto policies, though it's harder to prove (and a really nasty moving violation in most states).

"If you're going to race, you have to be prepared for the consequences," says Penny Gusner, CarInsurance.com consumer analyst. "From a risk standpoint, you more or less are pushing your car over a cliff."

And maybe yourself as well. Any personal injury protection or medical payments coverage you have on the street may not apply on the track, Gusner says; without it, you'd need to rely on your own health insurance coverage, assuming that you have it.

Lastly, it's very likely that racing voids your manufacturer's warranty, if your car is new.

Track coverage at a price

Specialty insurance companies will write policies for amateur drivers at sanctioned events. Policies are typically "agreed value" -- that is, you and the insurance company agree what your car is worth up front, and you pay a premium based on that amount. They typically cover only damage to the car, not any injuries the driver suffers or damage he may inflict on others.

While $200 for track-day coverage may sound steep, policies for specialized racecars can cost much more. Ryan Ondrejko Motorsports carries several.

"[We have an] on-track policy that covers damage done to the car while I am racing and the other is an off-track policy that covers any issues that might arise while the car is not on the track. We are currently insured for up to $150,000. It costs us between $4,000 to $5,000 a year to have both packages available for our car," says Ondrejko, two-time National Hot Rod Association Northeast Top Sportsman Champion.

"In a sport where you are accelerating from 0 to 200 mph in a matter of six seconds, so much can go wrong," Ondrejko says. "I wouldn't drive a racecar that was not insured."

A Sports Car Club of America racer competing in eight or 10 races will pay a much different rate than a drag racer competing twice a year or a Porsche owner tackling a single track day.

At this level, the type of cars, their speed and horsepower, and even the racetracks themselves are taken into account. Most racers have a policy for their vehicles, an off-track policy to cover their cars while in storage and general liability.

Yet many opt out of health insurance policies.

"While this is common, it is in no way acceptable, and someone interested in getting involved with racing should make sure they are financially able to do so," says Tom Doran, CEO and longtime motorsport helmet expert at The Helmet Man.

"As a racer, you're going to have to expect premium insurance prices," Doran says. "Most car insurance carriers refuse to cover such a high level of risk, but there are some race-friendly carriers, like Hot Rod, Heacock, or Naughton that can help, for a premium, of course."

Interestingly, amateurs who participate in professional events can void a policy and any injuries resulting from racing.

"A client is rated based on the type of motorsport, class and medical history," says Adam Bates, vice president of Insurance Services of America, which offers niche insurance including health coverage for amateur and professional racers. "I usually recommend an AD&D [accidental death & dismemberment] policy, as most life policies exclude racing."

What's more, Laura Hauenstein, president of WSIB Motorsports Insurance, which insures racers, says some of the agents familiar with motorsports will use the Internet to research the driver. If they find they have a history of crashing, rates can be higher.

Leave a Comment
Ask a Question
Comments
Tell us your thoughts
Leave a Comment
1 Responses to "Racing and car insurance"
Disclaimer: Answers and comments provided are for information purposes. They are not intended to substitute informed professional advice. These responses should not be interpreted as a recommendation to buy or sell any insurance product, or to provide financial or legal advice. Please refer to your insurance policy for specific coverage and exclusion information. Please read our Terms of Service.