Updated on: Jan 27, 2023
Editorial Integrity - Why you should trust us?
Our mission is to help you make educated insurance decisions with confidence. We have an advertising relationship with some of the offers included on this page. However, this doesn’t influence our editorial judgment or recommendations. The rankings and listings of our reviews, tools and all other content are based on objective analysis, and we fully own our opinions.

Radar detectors and your car insurance

Radar detectors can have an impact on car insurance rates, as they are often associated with risky driving habits. Insurance companies view drivers that use radar detectors as more likely to speed or break other traffic laws. As a result, having a radar detector in your vehicle may cause your car insurance premiums to increase. 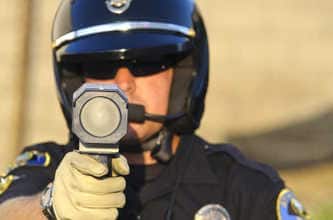 In most states you can use a radar detector for personal use to avoid speeding tickets, and there’s really not much your car insurance company can do about it.

A radar detector alerts the driver when it picks up signals emitted by radar equipment that police use to catch speeders. The idea is for the warning to sound before the cop points the radar gun at you.

Ranging in price from about $35 to more than $500, even a pricey model would more than pay for itself if it kept you from getting a ticket and a subsequent hike in your car insurance rates.

Some radar detectors provide digital voice alerts, and some can detect laser as well as radar signals. Now that local governments are using speed and red-light cameras, some models come loaded with information about the camera locations, which you can update using a computer and Internet connection. Many of today’s radar detectors also work in conjunction with smartphone apps.

Beware that radar detectors are prohibited in Virginia and the District of Columbia, as well as on U.S. military bases. In Canada, they are prohibited in Manitoba, New Brunswick, Newfoundland and Labrador, the Northwest Territories, Nova Scotia, Nunavut, Ontario, Prince Edward Island and Quebec.

In addition, 20 states besides Virginia and the District of Columbia prohibit the use of radar detectors in commercial vehicles.

If you’re ticketed for unlawful use of a radar detector as a non-commercial driver, you’ll face a fine of up to $300 in the District of Columbia. In Virginia, you’ll pay about $100. In Fairfax County, for instance, the fine is $40, and the processing fee is $62.

The offense does not count as a moving violation, and no demerit points are assigned for a violation in D.C. or Virginia. As a result, a ticket for unlawful use of a radar detector would not impact your car insurance rates, CarInsurance.com experts say.

“Research shows that drivers with radar detectors are consistently overrepresented among the fastest speeders,” the institute says on its website.

Radar and your insurance

Insurance companies base premiums partly on what kind of car you drive but generally wouldn’t know whether you owned a radar detector.

Experts at CarInsurance.com say that none of the insurers they have run across ask applicants whether they use radar detectors.

Geico made headlines in the late 1980s when it fought for the right to deny coverage to drivers who used radar detectors. A Maryland Geico customer whose policy was canceled because he used a radar detector took his complaint to the state’s insurance commissioner. The commissioner ruled in 1988 that Geico could no longer deny coverage on that basis. The next year Geico dumped a policyholder in California for having a radar detector, and the California Department of Insurance ordered the insurer to offer to renew the policy.

Radar detector or not, it’s a good idea to slow down to the speed limit. For more than two decades, speed has been a factor in almost one-third of fatal car crashes, according to the National Highway Traffic Safety Administration.

And a speeding ticket will cost you big bucks by the time you pay the penalty plus all the related fees and fines. In Riverside County, California, for instance, the penalty for going 1 to 15 mph over the speed limit is $35, but the total tab, once all the other charges are added, is $233. You pay a total of $362 for traveling 16 to 25 mph over the limit and $485 for exceeding the limit by at least 26 mph. In some states, the penalties are stiffer. In North Carolina, for instance, the penalty for “excessive speeding” is a mandatory 30-day driver’s license suspension.

“A minor speeding ticket might be ignored if it’s your first ticket,” CarInsurance.com experts say.

Or it might prompt a 10 to 15 percent surcharge. A second speeding ticket or a first ticket for major speeding will increase your rates anywhere from about 20 to 40 percent, according to the data analysis by experts at CarInsurance.com. Insurers see speeding as a red flag signaling greater risk, so they raise rates to protect their bottom line.

“The faster you go, the more it’s going to hurt you,” experts say.

— Barbara Marquand contributed to this story.