You don’t have to be driving under the influence to be vulnerable to an accident that can cause damage, injuries, or even death. Driving while drowsy or suffering from a sleep disorder can lead to the same consequences. 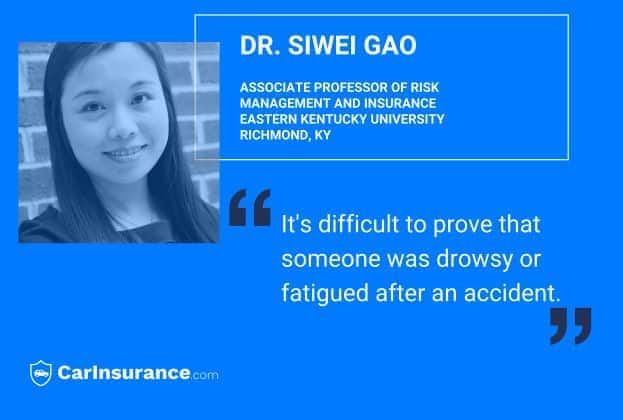 According to the Centers for Disease Control and Prevention, around one in 25 adult drivers report having fallen asleep while driving in the previous 30 days. And National Highway Traffic Safety Administration data shows more than 10% of drivers admit falling asleep behind the wheel at least once a year and drowsy driving crashes result in more than 1,550 deaths, 71,000 injuries and $12.5 billion in losses annually.

Siwei Gao, professor of insurance studies at Eastern Kentucky University, analyzes the root causes for drowsy driving. She explains that people may need to get from point A to point B in a timely manner, while their body needs sleep, but they push themselves to keep going. “Eventually, they lose consciousness and give in to their inner physical demands for sleep.” Professor Gao observes that drowsy drivers may be fatigued behind the wheel because they:

Alex Savy, a certified sleep science coach and founder of SleepingOcean.com in Toronto, agrees that one of the main reasons why some drivers fall asleep behind the wheel is because they aren’t well-rested. “If you haven’t slept well the night before driving or suffer from regular sleep deprivation, you are much more likely to feel drowsy during the day and may fall asleep while driving,” he says.

Certain medical conditions can also cause drowsy driving, including:

“Experimental studies suggest that even moderate sleep deprivation, like the kind experienced at the end of a long day, can impair drivers’ cognitive abilities comparably to having a blood-alcohol concentration at the legal limit of 0.08,” cautions Evette Hooper, Houston-based litigation and personal injury attorney.

Ramifications of falling asleep while driving

Mark Friedlander, director of Corporate Communications for the Insurance Information Institute in St. Johns, Florida, believes that drowsy driving can be just as dangerous as driving while impaired.

“Falling asleep at the wheel of a car or truck is probably going to lead to an accident. A head-on collision, going through a red light at a busy intersection, or veering off the road and hitting a tree or pedestrian are all potential scenarios,” says Friedlander. 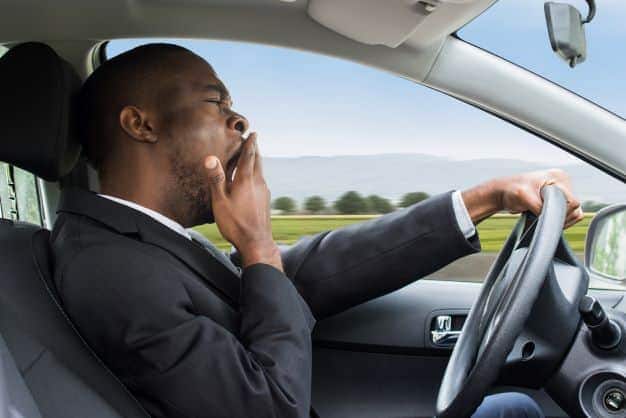 Consider that if you are driving at nearly 35 mph, your vehicle will travel approximately 50 feet per second. “Therefore, being inattentive and asleep for just two seconds could cause a vehicle to travel 100 feet. If the vehicle veers off course at all during this time, it could hit a tree, a vehicle next to it, or even oncoming traffic, resulting in catastrophic injuries or even death,” says Zachary Leacox, a civil trial attorney in Orlando, Florida.

“An officer could give a person a ticket for nodding off at the wheel, even before causing a crash or breaking another traffic law. In Missouri, for example, drivers are required to drive carefully and prudently, and anything less can result in a ticket,” explains Max Pepper, a traffic attorney with Missouri Ticket Fixers in North Kansas City, Missouri. “The most likely ticket issued would be for careless and imprudent driving, which is a class B misdemeanor that carries a fine of up to $1,000 and even potential jail time.”

However, professor Gao asserts, “It’s difficult to prove that someone was fatigued or drowsy after an accident. However, proving that he/she has not rested for a specific number of hours may be accomplished to some extent through cell phone records.” Cell data could demonstrate whether or not there was activity during a certain period of time. “Any legislation penalizing drowsy driving should look consider a driver’s history of sleep/rest during the past 24 or 48 hours,” suggests Gao.

While instinctively it may seem that drowsy driving should be considered reckless driving, Gao isn’t sure that is entirely appropriate. Upon reflection, Gao imagines this scenario: “What if Maggie is a single Mom who is taking three shifts at different jobs trying to support her children? Although fatigued driving and drunk driving can equally impede a driver’s judgment, I don’t think a fatigued driver is as guilty as a drunk driver.”

“I am afraid that classifying fatigued or drowsy driving as reckless driving is going to unfairly punish low-income individuals,” adds Gao. “They usually have to sacrifice their sleep/rest hours for their income. At the end of the day, do we want to see Maggie behind bars trying to raise her children? It reminds me of Fantine in Les Misérables.”

“Driving drowsy can lead to a major increase in the cost of your vehicle insurance, especially if you are ticketed for reckless driving,” Friedlander warns. “On average, a reckless driving conviction will increase your annual insurance premium by more than $1,000.”

Reckless driving infractions are not looked on kindly by insurance companies. CarInsurance.com’s analysis of auto insurance rates finds that the national average rate hike for a reckless driving ticket is 73%. However, some states show a more significant increase for such a ticket, such as California, where the average rate increase is 177%.

Even if you aren’t convicted of reckless driving, getting into an accident due to drowsy driving can still hike your rates. The average rate increase after an accident claim is about 30%. And, if you damage your car and have only liability insurance without optional collision coverage, you have to pay for the repairs yourself.

If you’re in a drowsy driving crash, the claim for your vehicle’s damage would be filed under optional collision coverage, which approximately four in five US drivers carry. The insurer would pay for damages inflicted upon the insured’s vehicle, minus the deductible amount, with collision coverage in place.

“However, if you only purchased the state minimum liability coverage, you would not be covered if you fell asleep at the wheel and only damage your car, with no other damage or injuries incurred. This is why it’s so important to weigh your insurance options and consider all levels of coverage – including collision coverage,” recommends Friedlander.

Liability insurance only covers injuries and damage you cause to others and their property. It pays out up to the the limits in your policy. If the expenses exceed your limits, you’re responsible for paying the balance. Leacox, notes that your premiums may go up if someone sues you because you injured them while falling asleep at the wheel. “That’s because your insurance company will have to pay a lawyer to defend its interests and pay for the settlement of the lawsuit or judgment,” he explains.

If your insurance carrier finds you have received a ticket for a traffic offense related to drowsy driving or sleeping behind the wheel, it could drop your coverage entirely.

“If your carrier thinks you are an unsafe driver, they can choose to stop extending coverage to you, which could result in a loss of your ability to own an insured vehicle that you can drive. This is especially likely if you hurt someone who needs to file a claim against your car insurance coverage to cover their medical care,” says Hooper.

Car insurance companies typically cannot drop your coverage mid-policy and are unlikely to review your driving record until your policy are up for renewal. If you get a non-renewal notice towards the end of your policy term, you’ll have time to shop around. Look for an insurer whose rates you can afford and will take you on with any infraction or accident on your record from driving drowsy or falling asleep at the wheel.

The American Academy of Sleep Medicine lists the following as warning signs for of drowsy driving:

In the near term, take these steps to prevent drowsy driving: