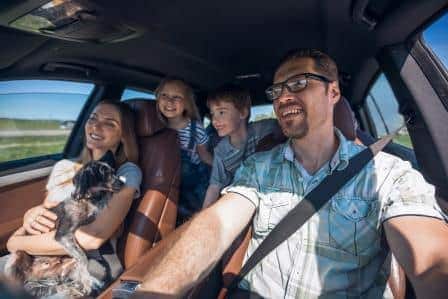 Soon, the school year will be in the rear-view mirror, and families across the nation will hit the road for a good old-fashioned summer road trip. To kick off the season, CarInsurance.com surveyed parents to find out how they feel when driving, what their family road trip experiences are like, what they do to cope with traffic and what types of mishaps they've had due to poor road conditions.

CarInsurance.com’s new survey of 1,000 parents finds that nearly three-quarters of respondents had the time of their lives on their family road trip-- and would do it again. That’s despite some reporting family members having a meltdown before leaving the neighborhood.

People have a more positive outlook on family road trips this year compared to last year, despite a small uptick in fighting and meltdowns in the car. We asked drivers to describe family road-trip experiences. Here’s how 2019 responses compare to those of 2018:

CarInsurance.com finds that drivers love road trips so much that they don’t mind driving more than 1,000 miles. We asked how many miles people would drive on a road trip. Here are the responses:

Gas prices are causing many families to stay closer to home. The most common reason why people don’t take road trips is gas prices. This is different from a year ago when the top choice was that people couldn’t take off work.

Contentment in the car

Road rage is something nearly everyone has experienced, but our findings show that drivers are, overall, happy behind the wheel. Or at least they claim that’s the case.

Our 2019 findings on how drivers feel about their driving experiences are similar to last year’s.

In a lane of their own: No crying in baseball, but plenty in traffic

Sitting and driving in heavy traffic are two of the worst parts of the family road trip. Americans find ways to cope. It could be music, talking on the phone or even getting some work done.

There have also been negative outcomes of driving in heavy traffic:

The condition of America’s roads is getting worse. The most recent Department of Transportation statistics show that about half of U.S. roads are considered poor/mediocre. In some states, such as Connecticut and Illinois, the percentage is nearly three-quarters. Road conditions, and the cost of insurance and gas are chief among motoring metrics that CarInsurance.com uses to rank the best and worst states for driving.

Road conditions are leading to drivers taking other routes, suffering vehicle damage and getting into accidents, respondents say. Here’s how 2019 responses about how poor roads affected driving compared to last year:

Just one accident can raise your yearly car insurance rate by 32 percent, or $450 a year, on average, according to CarInsurance.com’s rate data analysis.

Regardless of your experience on the road, and whether or not you've experienced an accident or got a ticket, you can still save on car insurance by comparing rates, says Penny Gusner, CarInsurance.com consumer analyst. “If you’ve had a recent accident  you should compare car insurance companies as your current carrier may no longer have the lowest rate,” says Gusner. “That’s because each insurance company assesses risk differently, so pricing varies significantly for the same coverage among insurers.”

CarInsurance.com data show that drivers with a recent accident can save about $1,100 by doing a car insurance quote comparison, as that was the difference between the highest and lowest rate fielded from six major insurers.

See average car insurance rates for your ZIP code for three coverage levels, as well as the highest and lowest rate fielded from up to six insurers, so you know what you can expect to pay and don't overspend when buying a policy.

CarInsurance.com in February 2019 commissioned Op4g to survey 1,000 parents who drive.

Leave a Comment
Ask a Question
Comments
Tell us your thoughts
Leave a Comment
0 Responses to "2019 Family road trip report: Rising gas prices, jobs impact summer road trips"
Disclaimer: Answers and comments provided are for information purposes. They are not intended to substitute informed professional advice. These responses should not be interpreted as a recommendation to buy or sell any insurance product, or to provide financial or legal advice. Please refer to your insurance policy for specific coverage and exclusion information. Please read our Terms of Service.