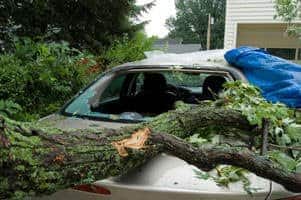 The first time David L. Bryant heard the words "act of God," he thought his car insurance guy was trying to slide on paying a claim.

Bryant lives on one of those wide Southern California streets lined with tall, decades-old palm trees that rise 75 feet or more. His bad luck was to park his car under one when winds got fierce and threw a huge and heavy frond on the roof, leaving a big dent and a mosaic of paint scratches.

"It crunched the top pretty good," Bryant recalls. He thought he would be covered under his collision coverage. He wasn't. "I was told it was an 'act of God,' and since I don't have comprehensive [coverage], I was screwed."

An act of God is not celestial. It's not ominous, or a judgment on your behavior. But it can be costly.

An "act of God" is a term used by a car insurance company to describe damaging events beyond our control. These events are sometimes called "acts of nature" because nature is usually to blame. Whenever a hurricane blows hard or an earthquake shakes us to the core, causing devastation along the way, that's considered an act of God. Floods, tornadoes, fires, snowstorms and hail, among other natural events, all fall in the category.

As do palm fronds.

Bring on the catastrophes

If you have comprehensive coverage on your vehicle, you're probably insured against all of those natural catastrophes. If you don't, you're out of luck. Your liability and collision coverage do not help with an act of God.

The good news is that the rates for comprehensive coverage are relatively cheap, not dependent on your own driving record, and unlikely to rise because of a single claim. By its very nature an act of God is unpreventable, no one is negligent, and fault cannot be assessed.

Unfortunately, that lack of liability can make an act-of-God claim a shield for those who damage your vehicle but don't want to pay, calling the crash unavoidable: Someone who collides with you during a blizzard may call the event an act of nature, for example. Or another driver may pass out at the wheel, damaging your vehicle.

"It's hard to cite 'act of God' with a driver behind the wheel," says CarInsurance.com consumer analyst Penny Gusner. "They didn't have to drive on ice. They chose to."

It's rare, Gusner says, that the other driver's insurance company would refuse to pay based on an act-of-God claim if there's even a hint of negligence. But if the other driver's insurer refuses to pay, your options are to take them to court or to file a claim against your own collision, comprehensive or uninsured motorist coverage and let your insurer go to bat for you.

Car insurance for the unpredictable

Bryant says he only bought collision and state-mandated liability coverage, because the vehicle was old and he planned to replace it. He didn't want to pay extra for comprehensive, which would have fixed the damage. "But now I can't sell it because of the dent," Bryant says. "It will cost more for repairs than I want to pay. You could say an act of God did me in."

While a specific disaster may be unpredictable, catastrophes strike regularly enough that going without comprehensive coverage on a newer car can be foolhardy.

No one could have foreseen the deadly swarm of tornadoes that destroyed almost one-third of Joplin, Mo., in May. According to the Missouri Department of Insurance (MDI), 6,530 personal auto claims totaling $54,310,402 have so far been settled. There were also 301 commercial vehicle claims, with $3,663,730 in payouts.

Many consumers aren't sure if their car insurance policy covers acts of God.

Look for a list of uncovered perils under your comprehensive coverage. Lightning strikes and flash floods tend to be the most common perils excluded from coverage, Gusner says.

This is especially important if you live in a region prone to hurricanes, an earthquake-plagued state like California or any of the areas that suffer tornadoes or flooding. Insurers may charge more for comprehensive in these regions to reflect the increased risk they've taken on by issuing a policy. But it's unlikely you'll have to pay extra for an add-on to protect against a specific act of God, as you might with your homeowners insurance.

Should all cars have comprehensive insurance?

Start by determining your car's value. If it's new or worth a fair amount, buying comprehensive may be the only way to go. If you owe money on it, it's a must.

Like all non-liability insurance coverage, your tolerance for risk ultimately determines whether you buy. Comprehensive doesn't cover just natural disaster; it covers nearly all damage to your car that's not a collision, from vandalism to theft to a malicious palm frond.

Michael Barry, a spokesman for the Insurance Information Institute, says the added coverage might not be cost-effective if the vehicle is older and worth less than $1,000. He adds that comprehensive is usually sold with a $100 to $300 deductible; the higher it is, the lower the premium. (Comprehensive coverage for Bryant's old 1988 Nissan would have run about $78 a year with a $200 deductible.)

About 77 percent of insured drivers opt for comprehensive, says Barry, pointing to recent data from the National Association of Insurance Commissioners.

Bryant now belongs to that 77 percent. He donated his damaged auto to charity and bought a newer used one, with adequate comprehensive. "I was planning to do that anyway, when I found my next car, but let's just say this cemented it in my head," he says.

Leave a Comment
Ask a Question
Comments
Tell us your thoughts
Leave a Comment
0 Responses to "'Acts of God' and your car insurance"
Disclaimer: Answers and comments provided are for information purposes. They are not intended to substitute informed professional advice. These responses should not be interpreted as a recommendation to buy or sell any insurance product, or to provide financial or legal advice. Please refer to your insurance policy for specific coverage and exclusion information. Please read our Terms of Service.